Katt Williams speaks on Oklahoma, Russell Westbrook and celebrity in politics ahead of three shows in Norman 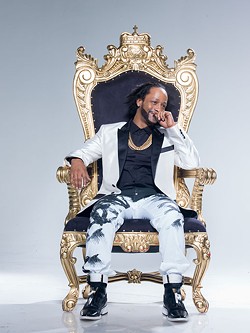 Those who scored tickets to either of Katt Williams’ Friday and Saturday stand-up comedy gigs at Norman’s Riverwind Casino should consider themselves lucky.

Both local Great America tour stops quickly sold out after tickets went on sale. On May 3, Williams announced a “third and final” Riverwind show via Twitter for 7 p.m. Sunday.

With his trademark animated stage persona, the presiding and self-proclaimed pimp of comedy has made himself one of America’s most in-demand touring comics. Along with Dave Chappelle, Mike Epps, Tracy Morgan and Martin Lawrence, Williams is part of the vanguard of black, Generation X funnymen that stand out in one of comedy’s true golden eras.

His legal embattlements have also forced him into the headlines. Williams was recently sentenced to a year of anger management classes in a 2014 case in which he allegedly stole a camera from a female photographer who was with rap mogul Suge Knight. The incident is one of several legal issues the he has become entangled in through the course of his career.

Williams recently spoke with Oklahoma Gazette ahead of his three-day Sooner State stint about his history with the state, Chappelle’s return to the limelight and celebrity in politics.

OKG: Do you remember how your first set in OKC went for you?

KW: I just remember that the feeling was overwhelming. The first time I did stand-up, I only did like five minutes. The only thing I was really impressed with was how fast the five minutes went. This was a little bit different, and it was the first time I realized black and white audiences were laughing at the same things. I decided at that point that I would stand in that middle ground: an African-American being African and American at the same time and speaking for more than one demographic. ... That wasn’t something I just decided to do; that was something Oklahoma City taught me.

OKG: Do you think Russell Westbrook is going to stay with the Thunder?

KW: Absolutely. I mean, please take this correctly, but being a weirdo is not a bad thing. There are weirdo places like Austin, Texas. That’s just, like, a weirdo place. Portland [and] Seattle — these are weirdo places that have their own style, their own quirks, their own everything. That’s Oklahoma City and that’s Russell Westbrook at the end of the day. I don’t see a benefit in leaving. He feels the same way about the city as the city feels about him. Even if he went to another team, he would have to try and do that all over again.

OKG: You’re in the movie Bastards, which is set to come out later this year. There are a lot of interesting people in that one.

KW: I’ve only done like 17 movies, but this was the most eclectic group of cast members. This was Owen Wilson, Ed Helms, Ving Rhames, Terry Bradshaw, Glenn Close. This is a crazy group, and everyone was so wonderful; it was such a joy. It’s one of those projects that you’re really sad when it’s over because you know something special took place and you won’t get that back again. It certainly made me feel good about Hollywood, just to be in a production with that many high-quality people. … Terry Bradshaw is comedian funny. I don’t think many people know that. He’s always going.

KW: He has a skillset that you just don’t find normally. To get that in an older, great football athlete is just off the charts, that he’s that good at comedic timing and that good at delivering deadpan. Those are real skills.

KW: Oh yeah. I understand everything that has been said about them. … People are going to nitpick, but at the end of the day, we’ve never really seen anyone in the industry actually fight a blackball. There’s always been a conspiracy theory as to whether people get blackballed or not. Dave Chappelle is one of the instances where we didn’t have to put on a tinfoil hat to figure it out, just because the guy was missing from movies and television for six years. Now that we’ve accepted him back, it’s been an additional four or five years. We still haven’t seen him in a movie or on TV. In that aspect, it was a tremendous success because if nothing else, it gave us quality, original programming, and we need Dave Chappelle’s voice no matter what.

OKG: Have you ever met Dwayne “The Rock” Johnson, and do you have a take on the news that he might be considering a presidential run?

KW: Yes, I did meet him one time. I was already impressed with him as a person from his track record, but I did not know that we was the physical specimen that he was until I saw him in person and realized that his arms were as big as my head. I think if we’ve learned anything from this current administration, I think we’ve learned not to laugh at people when they say they may be the next president of the United States. … Al Franken showed us you can do politics if you’re sincere, and [President Donald] Trump showed us you can do politics even if you’re not.

OKG: If you’d like to announce your intention to run for president, you can do so right now.

KW: Oh no. I’ve got enough going on in my life; believe me. We have to wait and see how this current [administration] works out.

Note: Friday and Saturday shows are sold out.