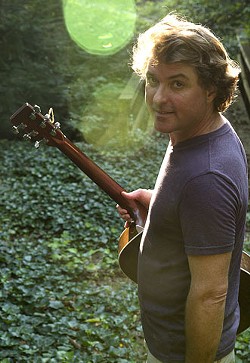 Keller Williams’ live show is a unique sight to behold. Many have compared his distinctive acoustic guitar and looping pedal technique to a one-man jam band. Williams prefers the term acoustic dance music, and the sounds he conjures with little more than his guitar, looper and computer push the boundaries of genre.

Those who look a bit harder at Williams’ highly praised live show, however, will notice another striking detail: He often performs barefoot.

“It definitely doesn’t feel right when I have my shoes on and I’m playing,” Williams said. “It feels too different, and I don’t like it.”

Williams (no relation to the Texas-based realty company of the same name), has been churning out his blend of jazz, rock, reggae, electronica and progressive bluegrass since the late 1990s. The outdoor festival favorite is known for his adventurous series of solo, monosyllabic studio albums including 1999’s Breathe and 2002’s Laugh. In January ’17, he released Raw, his first full-length to ditch loop pedals and feature just Williams’ guitar.

In a recent conversation with Oklahoma Gazette, Williams said his penchant for playing barefoot began as a teenager when he was just trying to be comfortable on stage. But as he began to incorporate the pedal bass into his act more and more, he saw a practical purpose for exposed toes. Some of the pedals he had to press with his feet were so small that he’d often press more than one down while wearing shoes.

“With my toes, as I’m playing, I could kind of feel around where these buttons are with my toes using the sense of feel,” he said.

The only times Williams shelters his digits on stage are in extreme elements, something he won’t be exposed to in the Tower’s warm confines.

“I’ve been taken to my knees with electric shocks through the microphone,” he said. “There are festivals where it’s raining and the water is creeping in. I mean, I’m not stupid. But I do it anytime I can get away with it, which is 99.9 percent of the time.”

Williams first adopted the pedal bass while playing small bars and clubs in the ’90s. As just an acoustic musician, he felt nearly invisible in rooms full of people mostly focused on drinking their beer or talking to a friend. He needed some way to grab people’s attention.

“I wasn’t able to afford anyone to play with me — I couldn’t pay them,” he said. “And I didn’t want some kind of cheesy sequencer to play the music as soon as you hit the button.”

Williams began trying out the pedal bass as a way to make more sound without the help of others. As he got better at it, he noticed a lot more people were paying attention to what he was doing. It was unique and upbeat.

“It kind of turned into this little dance party,” he said.

Looping and synthesizer technology has improved by leaps and bounds since Williams began using it in the previous century. He now has a pick-up in his guitar that sends the vibrations in his strings to his computer, which then translates that into programmed cello, flute, saxophone and other samples.

“Just for the guitar-playing consumer,” he said, “there’s so many inexpensive tools you can buy and plug in, ready to go, to start looping.”

Some recording artists — either through their own established precedent or pressure to keep up with the hot new sound of the day — find themselves conforming to a kind of sound they think their fans want to hear. For Williams, this dynamic works in the opposite direction. He makes music for himself first; fans tune in to hear what new direction Williams wants to take his sound.

Though that kind of creative independence is often championed by fans and musicians alike, to actually forge one’s own path takes courage. Williams knows his career will only last as long as he can maintain fan interest.

“I definitely could not do what I do if people were not buying tickets to the shows,” he said. “And if they stopped buying tickets, then I’m done; I’m going to be a DJ or something.”

Williams’ music ranges from steady bluegrass to bizarre electronic-sounding blends. He said his fans and other jam band enthusiasts are usually pretty open to a wide range of sound.

“The open-minded folks that come to these shows maybe share my undiagnosed attention-deficit disorder and we all get along pretty good,” he said.

It isn’t just Williams who is blending sounds these days. The musician notices a number of areas where different musical camps are beginning to overlap. Electronic music has borrowed hip-hop’s half-time groove and adapted it for its own purposes while, in turn, hip-hop adds more tones of electronica. Williams said a lot of today’s pop music has taken on a slightly rougher aesthetic from EDM.

“It’s definitely still polished,” he said, “but it’s definitely got the grimy grunge of all the subgenres of electronic dance music.”

Williams is working on a couple of new releases that will likely make their way to fans within the next year. On one all-instrumental project, he will be swapping out the bass line on a few of his older songs and replacing it with acoustic upright bass from Danton Boller.

Boller is the bassist in Williams’ four-piece band KWahtro, which released its Sync album in January 2017.

Aside from the instrumental album, Williams also plans on releasing another solo vocal album in 2018. His back catalogue is rich with distinct and frequent projects. Williams sees everything he puts out as a monument to his life at a certain point in time.

“Releasing records for me is more of a documentation,” he said, “just to kind of document where I am and what I’m doing musically.”