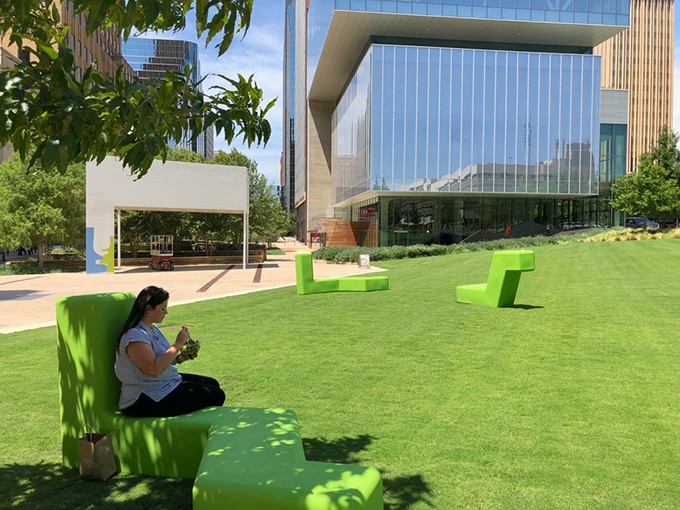 Downtown Oklahoma City’s Central Business District will unveil newly renovated Kerr Park at a kickoff party open to the public, many of whom had their say in what they wanted in an urban park.

The park, 102 Robert S. Kerr Ave., is designed with an emphasis on being inviting and comfortable, open to all and a hub for concerts, arts events, movie nights, pingpong and other uses.

The kickoff party is 11 a.m.-1 p.m. Tuesday with a garland-cutting at noon.

Renovations including a covered pavilion were largely funded by Southwest Airlines’ Heart of the Community grant, which is awarded to three cities each year. This year’s $200,000 grants went to Oklahoma City; New Orleans, Louisiana; and Buffalo, New York.

“The grant itself is to transform a space in an urban area that is underutilized by the community and make it more people-friendly and active with programming and amenities,” said Jill DeLozier, vice president of Downtown Oklahoma City Partnership. “So last August, we pulled together some community engagement workshops and invited the public and a bunch of downtown stakeholders, neighbors, residents, employees — anyone who cared to participate, to come and give us their ideas and opinions on what they’d like to see happen at Kerr Park.”

More than 400 people responded to the community engagement efforts, including Urban Neighbors, the area’s neighborhood association. Several community partners joined in the planning and funding of the park, including New York’s Project for Public Spaces, SandRidge Energy, Common Works Architects, Lingo Construction, the Oklahoma City Parks & Recreation Department and many other stakeholders and experts, DeLozier said.

“In downtown, other than Myriad [Botanical] Gardens and the upcoming Scissortail Park, we don’t have a lot of green space,” she said.

For years, Kerr Park was used by area workers for lunch and for occasional concerts but was otherwise unused.

“We’re trying to reiterate that Kerr Park is here and it’s not just for people to have their lunch break,” DeLozier said.

The park is .6 acres, and its update features a modern and cozy motif in shades of bright white, lime and purple. The park will be outfitted with new furniture, including outdoor couches and chairs, end tables and benches that can also be used as play equipment. It will also feature a pingpong table.

One of the concerns expressed by participants in the community engagement workshops was finding ways to make the green space more comfortable in Oklahoma’s extreme weather. The pavilion provides needed shelter, and the furniture is heavy enough to withstand the state’s wind as it whips through the urban corridors, but the pieces will be movable to accommodate activities and weather.

“We also had a ton of feedback about programming and special events ranging from yoga in the park all the way to the [Oklahoma City] Memorial Marathon finish line for the Kids Marathon,” DeLozier said. “Our strategy was to put in some furniture and shade structures and do quite a bit of additional programing, public art and basically make comfortable, inclusive gathering spaces for anyone who would like to use the space.”

The group plans to host movie nights in which films are projected on the Parkside Building, the exterior of which was designed with projection in mind.

“We’re particularly lucky in Oklahoma City to have the award-winning Myriad Gardens, and we’ve learned a lot of lessons just by watching how well they do things there,” DeLozier said.

She said  no public space is ever done being improved.

“Making public spaces more people-friendly is an ongoing process, and the needs of the community may change,” DeLozier said. “I love that as MAPS has evolved, we’ve been adding sidewalks and trails and other health-related initiatives. We’re making sure people are going outside and spending time in our green spaces.

“It’s really filling in the gaps of all those big projects that we’ve accomplished. That’s where Downtown Oklahoma City Partnership sees its role: making sure all these big amenities are connected and that the pedestrian experience is really excellent when you’re traveling through downtown. We don’t want any dead spots. We want people to keep exploring every single block.”