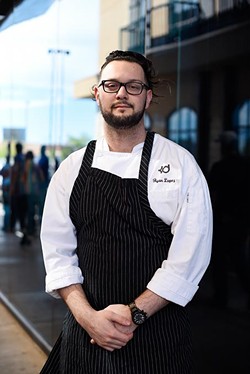 Water is essential to life, yet an entire Michigan community cannot bathe, drink or wash their clothes using the water coming into their homes. Ryan Lopez, Kevin Durant’s personal chef, felt the need to do something for the people of Flint, Michigan, to get them through the ongoing public health crisis affecting the industrial city.

“I’m from Michigan, so it was weighing on my heart and I was thinking, ‘What can I do about this?’” Lopez said. “I wanted to show that our state is aware of this, that we can come together like people came together for us when the tornadoes hit.”

Lopez put his skills to use. Eat for Flint, a benefit for residents affected by the lead poisoning of the Flint water supply, starts 5:30 p.m. March 30 at Kd’s Southern Cuisine, 224 Johnny Bench Drive. The event benefits United Way of Genesee County, which is distributing water filtration systems, water bottles and testing kits as well as underwriting efforts to replace plumbing and provide medical care for children impacted by the crisis.

Lopez said what happened in Flint took something fundamental away from its citizens’ lives. In March 2013, Flint city officials approved a measure to end its contract with Detroit’s water department and contracted with a new supply system sourced from Lake Huron. Unfortunately, the new supply will not be operational until June 2016, so as an interim cost-saving measure, Flint hooked into its emergency supply, the Flint River, without proper corrosion control measures being put into place.

As a result, lead from the financially troubled city’s decades-old water mains leeched into the supply.

“People are not able to take showers up there. They can’t drink out of the water fountains or their own faucet. Kids are affected by lead poisoning,” Lopez said. “Every little bit counts. If we can offer a thousand water bottles to a thousand families, that’s huge for people who can’t shower, can’t drink water and can’t boil water.”

With Eat for Flint, Lopez hopes to make an impact where it is most needed. For $119, participants receive a four-course meal prepared by Lopez. The event also features a silent auction.

“Each ticket will buy one thousand water bottles, so that’s a lot of water bottles going to the city of Flint,” he said.

News reports continue to indicate that Flint residents were victims of fiscal maneuvers that did not take into account public safety. On March 3, Detroit Free Press reported that as part of a $7 million state loan designed to release the financially troubled city from emergency management, the state barred Flint from reconnecting with the Detroit supply in order to “help ensure continued financial stability for Flint.” While the city returned to the Detroit water supply in October 2015, once state officials acknowledged the extent of the crisis, lead deposits in residential, school and hospital plumbing had already done lasting damage.

“Someone was asleep at the watch,” Lopez said. “It’s a huge ordeal that must be fixed. For me, raising awareness about this in the state of Oklahoma is big. We can support and rally behind another community and give back.”