Nault Fine Art adds to its goal of spreading love for African tribal art with the HERD exhibition.

Brian Nault has a strong passion for collecting African tribal art, and his goal is to share that passion with the rest of Oklahoma City.

His tool for spreading that love is Nault Fine Art, a gallery located in Midtown at 816 N. Walker Ave. Nault, a longtime collector of African art and artifacts, has been running the space since it opened eight years ago.

A permanent collection of pieces accrued by Nault over the years can be found in the gallery’s tribal showroom, but visiting exhibitions are often brought in to show off work amassed by other prominent collectors.

Such an exhibit recently opened inside Nault Fine Art and will call the space home through May 31. HERD is a collection of bovine masks from famed Los Angeles collector Joshua Dimondstein and includes 12 pieces from a variety of African cultures.

All the masks in the touring exhibit are provenance pieces, which in the collecting world means art that belongs to a well-known collector and connoisseur. Dimondstein is a second-generation collector of tribal art and artifacts. His father, Morton Dimondstein, was an artist and collector who dealt to famous actors and producers throughout Hollywood.

African art has had a major impact on many famous artists, particularly the modernist Pablo Picasso, who was also a collector of tribal art. For a period of three years in the early 1900s, Picasso’s paintings were heavily influenced by African sculpture. The era of paintings from Picasso and other artists in this style is called Proto-Cubism, leading into the Cubist style for which Picasso would later be known.

The exhibition of bovine masks at Nault includes masks originating everywhere from the Nigerian tropic to the plainslands found in places like Cameroon.

“Cameroon could perhaps be called a sister country to the United States because there are grasslands,” Nault said.

The masks in the collection served a variety of different uses. Some were used in harvest festivities. Nault said the Nigerian masks were used in festivals that have to do with livestock. They would be accompanied by hyena masks, representing a threat to that livestock.

Many sub-Saharan African nations have no written form of their language, so the ceremonies some of these masks were used in were important in communicating tribal values and ideas.

“These masks translate to the community the importance or power of that animal,” Nault said.

The gallery owner said the masks are often about symbolically representing the power of the depicted animal.

Nault was born in Southern California but has been living in Oklahoma since his teen years. His love for tribal art has a lot to do with how much there is to learn about how they were made and the cultures from which they come.

“You can never know everything about it,” he said. “You can constantly educate yourself about it.”

His particular interest in African-style art could be traced back to his childhood love for the Maurice Sendak book Where the Wild Things Are. Nault retrospectively realized only a few years ago that many of the characters in that book remind him of figures from African styles of art.

The book might have helped subconsciously shape his current tastes, but Nault is also particular about the specific qualities he enjoys in African art.

“I like the positive and negative space; I like the expressive qualities,” he said. “I like the fact that they’re pigmented with natural pigments. They’re something from the Earth, so it’s something very visceral. You’re seeing natural things put to work.”

Nault went to Oklahoma State University to earn a degree in finance and accounting. He worked as an accountant for several years but eventually discovered that he had an aptitude for collecting antiquities.

Within a few years, he was already appearing at the top collector shows in the United States. Nault became a full-time art dealer in his late 20s.

Nault Fine Art can appraise and guarantee authenticity in writing for African tribal art, which is a huge service to its clients.

“That’s a big deal that we can do that,” he said. “We do that with every piece we sell.”

Nault claims that there are fewer than 100 people in the world who operate on that level.

“We’re pretty rare,” he said. “We all seem to know each other at some point.” 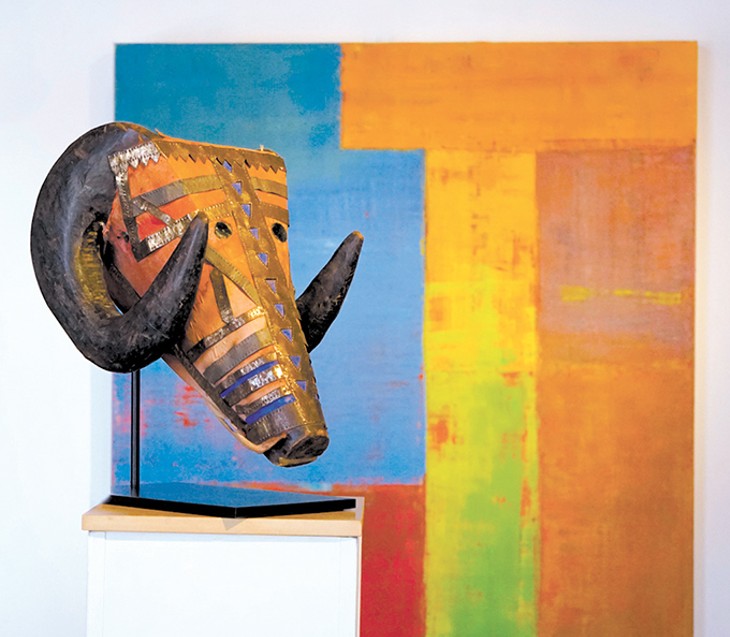 Nault Fine Art’s interior was custom-built just for the gallery. While not a primary part of the gallery’s mission, Nault said it frequently rents out the gorgeously designed space for private events.

Aside from tribal art, the gallery displays paintings and other art works by top city artists and national artists — some from as far as Chicago and New York City. Though he did not set out for it to be this way, Nault said all the painters he has collected have a bachelor’s degree in art and some have a master’s, which he said tends to correlate with higher quality work.

The purpose of Nault Fine Art is to expose the city to first-rate art and artifacts while, hopefully, inspiring people to begin their own collections.

“I want them to experience authentic objects,” he said. “If someone is going to get hooked on tribal art and enjoy collecting it for the rest of their lives, it’s always nice to get someone started on the right foot.”

Nault’s advice to aspiring collectors of tribal art is to always buy authentic pieces. It is important for a lot of beginning collectors to be smart about the region their pieces are from because artifacts from different regions tend to sell at different rates.

“I like to advise beginning collectors that you don’t have to spend a lot initially to find your eye and your style,” Nault said.

Collecting tribal or any kind of art is a lot like eating potato chips — it is very hard to stop after just one.

“As soon as someone realizes they want to collect African art, typically one piece just won’t do,” he said. “I try to assist them in not breaking the bank in collecting that group of objects that they can begin with and grow with.”