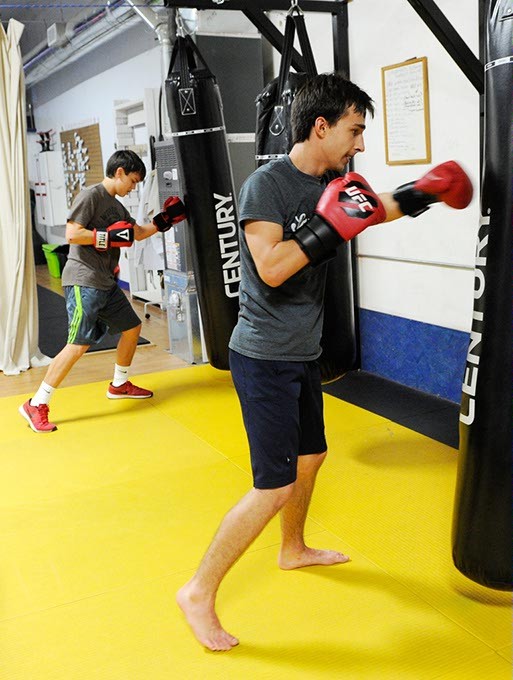 Over 5.3 million Americans participated in martial arts in 2013, according to the Sports & Fitness Industry Association, a leading national trade organization. Many choose the sport to learn self-defense and discipline, but martial arts also is a great way to exercise and lose weight in a class setting.

“I have a lot of people that come in for different reasons,” said Scott “Conan” Mincey, a 39-year martial arts veteran who owns and operates Conan’s Academy, 310 E. Main St., in Norman. “If you want to get into more details of self-defense, you can do that, but you can just do it to get in shape, lose weight and have fun.”

Mincey, 52, has been in business over 20 years, offering instruction for children, teens and adults in boxing, kickboxing, Jujitsu, mixed martial arts (MMA) and karate. He currently teaches about 160 students, ages 5 to 57 years old, including men and women.

Boxing and kickboxing offer the best full-body workout, providing increased agility, coordination, speed and endurance. Mincey, a four-time world kickboxing champion, teaches Muay Thai, full-contact and international kickboxing, and — for those who want to compete — shoot boxing and Sanshou kickboxing. His system is an anaerobic style, like interval training, that works the entire body.

“You’ll be kicking heavy bags, speed bags and focus pads,” he said, adding that most of his kickboxing students are women. “You train like a fighter, except on a recreational level.”

Some new students think they’re too old, out of shape, inflexible and intimidated to practice martial arts.

“You’re never too old to learn martial arts. It’s up to the instructor to make it safe for you,” Mincey said.

Kickboxing classes are available for children ages 7 to 12 years old, and karate classes start for children as young as 5. MMA and Kito Ryu Jujitsu (a form of grappling) classes are reserved for students 12 and up. Mincey said Conan’s structured karate program will improve a child’s performance in other sports as well as help their study habits and concentration.

“My sensei [Dillard] knew Chuck Norris, and I asked him one day, ‘I’d like to get a black belt with Chuck Norris,’ and he said, ‘I’ll see if I can make that happen.’ Next thing I know, I’m flying out to Vegas,” said Mincey, who studied with Norris for four years in the 1990s and went on to land a role on Norris’ television show, Walker, Texas Ranger.

Mincey’s proficiency in multiple martial arts disciplines led him to develop his own system, the Mincey Combat System.

New students can try a class at Conan’s Academy for free. Even if a guest signs up just for exercise and health benefits, Mincey said, the self-defense techniques learned will stay with participants forever.

“Most people that try out the class, they like it and end up signing up,” he said.