We also selected this roundup of fun and unusual roadside attractions, eateries, venues, museums and more that will pique any day-tripper’s curiosity while learning more about our state history and the highway that connects America.

Beloved and iconic stops along Route 66 that get a lot of love — Round Barn and Pops in Arcadia, Blue Whale of Catoosa, Cain’s Ballroom in Tulsa, Cheever’s Cafe and the iconic Milk Bottle along Route 66 in OKC — are awesome. But y’all already know about those. We also selected this roundup of fun and unusual roadside attractions, eateries, venues, museums and more that will pique any day-tripper’s curiosity while learning more about our state history and the highway that connects America.

Visitors know they are in for a ride at Oklahoma Route 66 Museum when they spot the pristine, cherry-red ’57 Chevy parked in the front bay window. The state museum displays items that were common along Route 66 during the 1950s and 1960s. It’s easy to feel nostalgic when listening to sound recordings of big trucks and welcome home cries of returning soldiers. There are plenty of kicks to go around when viewing vintage gas station signs or decades-old vehicles that once traveled the Mother Road. Before leaving, take a seat in the vintage diner and listen to jukebox tunes. Nat King Cole’s “(Get Your Kicks on) Route 66” is bound to play. The museum is open seven days a week.

There is only one place in Oklahoma, and perhaps the world, to see a Wright Glider, a B61 nuclear bomb, numerous rocket engines and a nuclear warhead in one place. Weatherford’s Stafford Air & Space Museum is home to more than 3,500 aviation and spaceflight artifacts. In the 1990s, a Weatherford Airport display case launched the museum concept. It began as a simply way to commemorate hometown Air Force officer and astronaut Lt. Gen. Thomas P. Stafford. An Oklahoma hero, Stafford flew two Gemini rendezvous missions and commanded the Apollo 10 mission, which was the Lunar Module’s first flight to the moon. These days, visitors spend hours in the Smithsonian affiliate. Many stop to marvel at the Gemini spacecraft or the NASA Shuttle Fixed-Based Simulator, wondering what it would be like to blast into space. The museum is open seven days a week.

It might seem corny, but nothing says fall in Oklahoma like P Bar Farms’ giant 10-acre corn maze just outside Weatherford. Oklahoma City TV station KFOR teamed up with the working farm to decorate this year’s maize maze with its 4 Warn logo and plenty of weather-themed clues to navigating the 3.5 miles of trails with nearly 100 decision points. Those who stop for the twists and turns should allocate at least an hour to get through it all, but anyone who gets lost can call the corn cops and get guidance to the exit. The fall season runs through Nov. 12.

Film buffs will want to ride Route 66 over Pony Bridge near Geary, where director John Ford filmed a scene for the 1940 film adaptation of John Steinbeck’s The Grapes of Wrath. Ford earned a Best Director Academy Award, and the film was nominated for Best Picture. Named for the 38 pony arches that make up the bridge, it’s a beautiful sight stretching out over the South Canadian River. But be careful! Even though Pony Bridge is a part of cinema history, it’s not particularly pedestrian-friendly. There is limited space to pull off the road to park and take pictures.

Hamburger enthusiasts across the country recognize the city of El Reno, a quick drive west of Oklahoma City, as the birthplace of the onion burger. The Great Depression led to the invention of this Oklahoma delicacy with a half a shredded onion smashed into a small patty of ground beef, helping stretch the size and flavor of the sandwich. Three longtime El Reno restaurants — Sid’s Diner, Johnnie’s Grill and Robert’s Grill — continue to serve onion burgers all within about a mile of each other. In May of each year, the city celebrates El Reno Burger Day with a 5K run, classic car shows, live music and the cooking of the Big Burger. The recipe includes 350 pounds of beef, 150 pounds of onions and a 350-pound bun cooked in a 12-foot by 12-foot convection oven the Friday before the event. 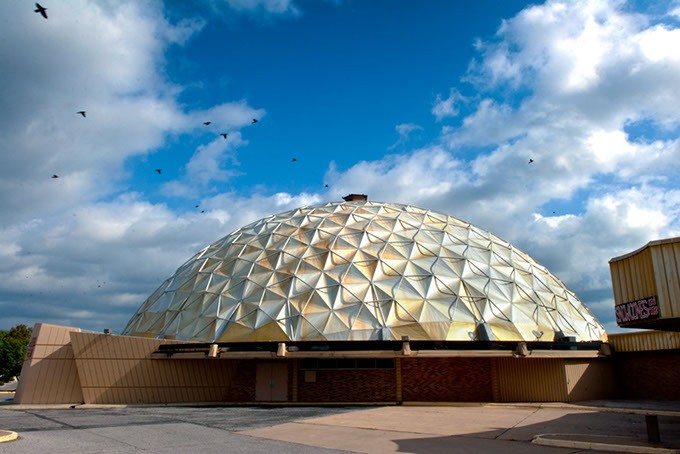 Much like Ponyboy, Oklahoma City’s famed Gold Dome, 1112 NW 23rd St., will stay gold as Colorado-based grocery store franchise Natural Grocers opens a new location inside the historic building. Originally built as a “bank of the future” by Citizens State Bank in 1958, the geodesic dome has been home to several businesses, including a variety of banks. Recent years have seen ups and downs, including plans to demolish the structure and sell the land to Walgreens, housing an optometrist’s office and jazz age-themed restaurant Prohibition Room, foreclosure and, in 2014, a planned renovation by TEEMCO set to include fresh and saltwater fish tanks and the world’s largest salt crystal lamp.

It’s time to get out and stretch those legs. Route 66 Park is a great place to turn loose the restless kids. The 148-acre park features Oklahoma City’s largest playground and about a mile’s worth of walking trails. The site rests on the shore of Lake Overholser and is a good picnic spot or lookout point for anyone visiting the area. Guests should check out Route 66 Plaza, which maps out the historic road’s expanse. Other attractions include a skate park, an amphitheater and Cyrus Avery Observation Tower, a chance to check out the park from above.

Tourist Trap Tees and GlassBoy Studios, located next to the Arcadia Round Barn, are a link to Route 66’s bright neon past. The studio is more of a destination than a shop. Owner, designer and artisan Joel Rayburn is happy to demonstrate glass-bending techniques and show off designs to curious guests who visit during shop hours, 9 a.m.-5 p.m. Monday-Friday. Rayburn specializes in 10-foot art pieces of 50-foot commercial signs, though GlassBoy is involved in an effort to revitalize signage across Route 66. Tucumcari, New Mexico’s Blue Swallow Motel debuted one of Rayburn’s signs last year. GlassBoy also is working on signs for Blue Whale of Catoosa and Ed Galloway’s Totem Pole Park that should be ready sometime in 2017.

A trek across America’s Highway can work up an appetite. If the car’s full of empty stomachs, pull over to Rock Cafe for an earnest slice of Americana (and maybe a slice of oatmeal pie). The diner is famous for serving up hearty burgers, chili and comfort food entrees, including its famous chicken-fried steak. The cafe’s other claim to fame is as a source of inspiration for Pixar Animation Studios in the development of its 2006 animated feature Cars. Owner Dawn Welch inspired the character Sally Carrera, a blue Porsche working as a town attorney. The restaurant and its exterior are decorated with homages to the film and tokens of appreciation from the Pixar crew. It’s open 7 a.m.-8 p.m. seven days a week.

Totem Pole Park, including what is often heralded as the world’s largest totem pole, is celebrated folk artist Ed Galloway’s historic testament to Native American culture. The brightly colored concrete namesake pole stands 90 feet tall and 30 feet in circumference and rests on the back of a large turtle. Galloway died in 1962, but not before making several other additions to the property, like the 11-sided Fiddle House, home to his hand-carved fiddles, and a gift shop. Other North American cities host wooden poles topping the Chelsea roadside attraction’s height, but Galloway’s creation remains one of the most massive concrete totem poles in existence.