Kids can Read it Forward this summer at the library 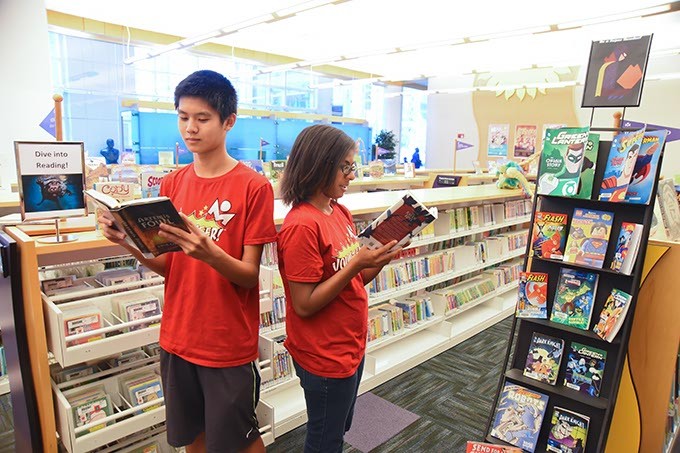 The Read It Forward Initiative essentially adds a third goal level to the Summer Reading Program and encourages participants to do good deeds.

With the additions, readers can donate books to Ronald McDonald House and donate $6 library fine waivers to fellow patrons.

As of June 25, 608 participants reached their Read It Forward goal and donated a book to Ronald McDonald House, Director of Marketing and Communications Kim Terry said.

“Sometimes they reach [Goal 2] by the second week of June, and we wanted to keep getting them to continue reading,” Terry said. “The whole pay it forward thing is so popular right now … It’s another way to incentivize people.”

Each goal is comprised of 30 sessions lasting 20 minutes each or 10 hours total, and participants log their sessions online.

Once Goal 1 has been reached, a $6 library fine waiver is earned. To pay it forward, patrons can donate their fine waiver to another patron who might need it more. Upon completion of Goal 1, children also receive a book of their choice and adults receive a cell phone power bank charger.

Goal 2 comes with the same perks from Goal 1 plus the ability to be entered in the end-of-program drawing for grand prizes.

The Read It Forward goal, or Goal 3, enables readers to send a book of their choice to Ronald McDonald House.

“You wouldn’t believe the early childhood — these are the ones who are 4 years and younger — they don’t read, but they’re being read to by their parents,” Terry said. “Thirty-six of those have already reached the Read It Forward goal.”

Throughout the library’s 19 branches, 18,700 participants have signed up for the summer reading program as of June 20, which Terry said puts the library a little bit ahead of numbers from last summer already.

Participants can enter weekly drawings by completing a varied list of tasks. For example, during the week of June 15, everyone who used their library card to check out books was entered into the weekly drawing. During the week of June 29, all children who attended an event through the library’s neighborhood arts program were eligible for the drawing.

To win the drawing prizes, participants must have a Metropolitan Library System library card, but to join the fun of the summer reading program, a library card is not required.

Print headline: Reading incentive, Children are encouraged to pick up more books with summer programs at the library.