GrOKC is one of the leading growers in the cannabis market, with a laboratory including some of the country’s most renowned cannabis brands. 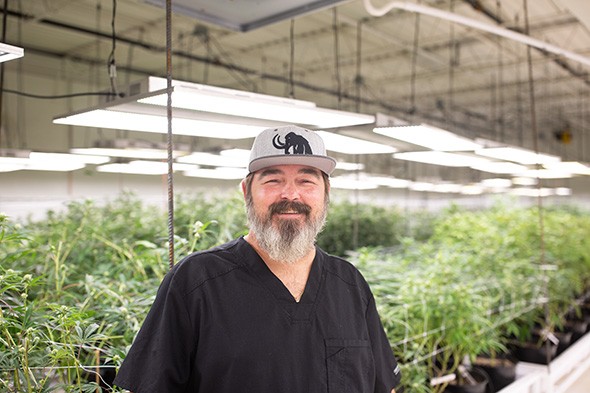 When Hugh Musser says that his company GrOKC is in the medical cannabis industry, he means it.

Musser first cut his teeth years ago on cannabis cultivation after a back surgery for issues that arose from his service in the U.S. Marine Corps.

“I was on painkillers, nerve blockers, muscle relaxers for quite a while until my roommate was like, ‘Hey, let’s get you off those. You can’t survive like this,’” Musser said.

Living in Washington, D.C. and working in real estate at the time, he and his roommate grew Musser’s first cannabis in 2002 and 2003. That roommate now lives in Oregon and works in their cannabis market.

“Back then, it was a lot easier though. B.C. was the brand of nutrients. It was a red bottle and a blue bottle and that was it, man,” Musser said. “I haven’t been doing it full time since then. I grew with him. We never sold anything. Once I moved back to Oklahoma, I’ve been self-medicating here and there for pain management for a while. You just do everything you can not to get caught, do what you can to minimize the risk. It’s that or get hooked on painkillers and crap for so many years and it’s just destroying your body.”

During a family meeting about where they should invest their money, the topic of legal medical cannabis in Oklahoma came up. Musser did not believe State Question 788 would pass, but once it did, he dusted off his old skills and founded the company.

“Don’t tell me to get on the train and not get going. It’s been nonstop since that point,” Musser said. “We’ve been running and gunning and just trying to keep up with supply and demand and trying to keep the genetics going, and we’ve been very fortunate with that as far as getting our hands on true genetics as opposed to going from seed on a lot of things. We’ve got everything in here from Dungeons Vault Genetics to Cookies Fam. We’ve got some of their cuts in here. Jungle Boys; we’ve got a lot of their cuts in here.”

But genetics are only part of the combination that makes GrOKC’s cannabis flower successful. Musser has other trained professional growers come in and teach his crew cultivation methods and the science behind them.

“There’s obviously been an evolution in this industry, not only genetically, but with nutrients, with lighting. Because, you know, 10 years ago, you would never dream about putting an LED light on a fish aquarium, let alone a plant in a garden environment. But when you look at what you’re doing, you’re replicating an outdoor environment in an indoor environment on a super-speed train with steroids, trying to get as much of that life cycle packed into the shortest amount of time for production,” he said. “What it boils down to is until we can get into the scientific side of things legally, as far as being able to do trials and separate different types of terps. That’s a whole different realm as far as mapping out the cannabinoid system to the DNA platform and seeing how that maps out. Because even though my brother and I are very similar, genetically, plants affect us differently. I try to educate the budtenders on our strains. I’m trying to bring the best quality medicine to market for the patients that’s as clean as it could possibly be. We do two weeks of flushing. We do two weeks of drying. We do two weeks at a minimum of curing to make sure that by the time it gets to patients, it burns the white ash. A doctor would never recommend that you ingest burnt carbons, but most people are going to do it that way.”

The genetics of both his plants and his family play a large role in how and why Musser is devoted to growing medical cannabis, up to and including the name of the company.

While GrOKC is a self-explanatory and stylized brand, it has a hidden meaning. It also stands for “Grow Kiki’s Cannabis.” Kiki is the nickname for his mother, who suffers from early onset Alzheimer’s, and medical cannabis has given her some sort of relief and reprieve from her ailment.

“All the grandkids call her Kiki. And so we were discussing doing Kiki’s Cannabis as a dispensary name or Kiki’s Kitchen if we’re gonna do some edibles, and so Grow Kiki’s Cannabis was where it came from,” Musser said. “And then my mother’s side of the family having Native American lineage, we wanted to go with a dream catcher in terms of that going to the Oklahoma thing as well, so we kind of tied it all together.”

The brand has been taking off locally thanks to its concentrates, but those all also come from the flower it grows. It was one of the first local brands to bring certain concentrates, like live resin, to market.

It currently has about 3,000 plants of 58 different strains in vegetative state with about 1,200 plants in flower. It will also be opening a grow facility in Tulsa, where it has about 2,500 plants flowering at any given time. It will still keep the clones and mothers at the Oklahoma City facility and truck the plants up there for their flowering periods. The scale of its operation allows it to conduct experiments on its plants on a massive scale.

“We could pop out about 2,200 clones in about 10 days in our cloners, plus we do Rockwool clones over here,” Musser said. “We like to scale and test everything. … We’re going to do these side by side on a hydroponic level and on a soil level, and then we’ll send it all in for testing and we’ll say, ‘Okay. Let’s see. What is the difference?’”

In addition to some of the most popular West Coast brands of cannabis, many of which are bred for higher THC content, GrOKC is also experimenting with medical strains bred for high CBD content along with THC.

“Nurse Jackie. Cancer’s Nightmare. I don’t need budtenders out there telling them that this can cure cancer,” Musser said. “We don’t have the scientific backing for that.  But let’s get that out there and see a patients tell us, ‘Hey, look, I love it. It’s helping.’ Because that’s all we do.”