Brenda Kingery’s work eludes interpretation. Her style is her own and presents stories and narratives in ways unfamiliar to even veteran art critics.

But the stories are there. And it’s worth the effort to discover them.

“My paintings have been described as narrative symbolism. The paintings reflect my history, experiences and the way I see my environment,” she explained. “I see life in a series of patterns that can almost be described as visual tapestries. The goal is to create paintings full of life’s breath that are full of boundless energy, yet exacting.”

Kingery’s work will be on display at Bricktown’s Exhibit C, 1 E. Sheridan Ave., through February. Exhibit C, an outlet of the Chickasaw Nation and Chickasaw Country tourism organization, is devoted to displaying the work of Chickasaw artists.

Kingery discovered her Chickasaw heritage a bit late in life, but for some years, it has been central to her work.

Kingery sees life in textures, and her work has a quilting feel. Just as one creates a quilt, she works on one piece of the image at a time, sewing together smaller images to form a larger picture. She balances complete improvisation with subject material taken from memory.

The mnemonic engine that drives her painting also evokes a dreamlike quality that challenges traditional modes of interpretation.

She starts each piece with a series of ink washes done in the Sumi-e technique she learned during her time in Japan. She then turns to oils or acrylics, adding as many as 25 layers to a painting, refining the image as she goes.

It’s not uncommon for her to incorporate mica and small found objects, buried like treasure between layers. One painting might be an amalgamation of 10 photos or a snapshot of a memory seen from 10 angles.

“A lot of the pieces here (at Exhibit C) are taken from photographs of the Red Earth powwow,” she said. “But I take them very loosely; I don’t try to do anything that’s exact. I’m not representing regalia in any particular form because I’m more interested in … the patterns and the way the compositions move.”

Kingery’s style is so unique that art critics and teachers had no vocabulary to describe her work until master potter Harding Black hung a label on it: narrative symbolism.

It’s a style she began developing as a child.

“I’ve always been a painter or an artist,” she said. “In kindergarten, the teacher called my mother and said, ‘You have a baby artist.’ My mother asked what to do; the teacher said, ‘Just buy her supplies and let her paint. Don’t try to teach her anything until she’s at least 16.’ … That was my real education.” 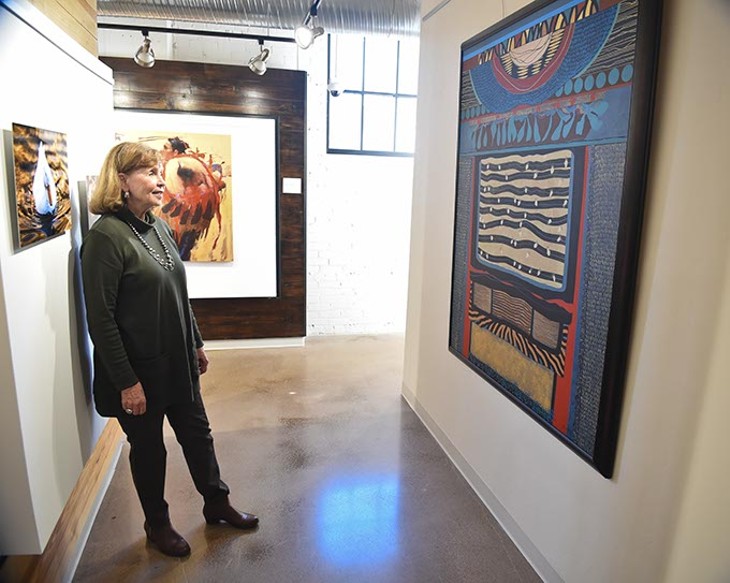 She kept at it, later attending the University of Oklahoma, where she earned a degree in art history.

Her marriage to her husband, Tom, an Air Force officer, meant moving from station to station, the first being Ryukyu Islands in Japan. It catalyzed two important features of her work: immersion in other cultures and a fascination with textiles. She spent little time on base, learning Japanese and practically becoming a local as she made contact with and befriended local artists and craftsmen.

Her stint in Japan kindled a lifelong love of the exploration of other cultures, her own in particular. After returning to the States, her mother invited her to the first Red Earth powwow. It was love at first sight, and what she saw would provide material for her work for the rest of her life.

“It sounds corny, but it’s true: I was blown away by the texture, the textiles, the movement,” she said. “Japanese dance moves slowly. When I saw Native Americans moving and the way that the dance went, it was texture again. It was textiles again that fascinated me. It was the most gorgeous transition for me to come from one culture to another so fluidly. In fact, it was perfect.”

Her immersion in other cultures continues with her work with Threads of Blessing ministry, which she founded almost 20 years ago.

Always interested in mission work, she and a colleague traveled with two dentists to Honduras, where they trained women to use a skill they already had — sewing — to create fine art. The works are brought back to the States to be sold, and 100 percent of the proceeds go back to the women who created them.

“We train women in something they can do without electricity, without running water and all the other elements we take for granted. Nor do they have the opportunity to make a decent living, because they’re way out in the country,” she said. “This project is interesting because nearly every woman in a third-world country has learned to sew out of subsistence. They picked it up immediately and are stunning in what they can do; it’s a demonstration of how art can change people’s lives.”

Kingery’s work is held in private, corporate and public collections around the world. It can be found at flagship Marriott Hotels, Arthur Andersen Consulting, University of Texas at San Antonio and San Antonio Museum of Art, where it’s part of the permanent collection.