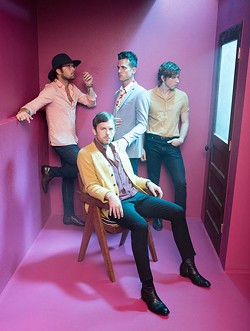 This is the year rock music was officially passed by hip-hop and R&B as the most listened to genre in the United States, and guitar sales have plummeted over the last decade.

It’s been exactly ten years since Oklahoma-bred and Nashville-founded Kings of Leon had the breakthrough into the mainstream with the album Because of the Times.

During the last decade, electric guitar sales have dropped from 1.5 million sold annually to just over one million, according to The Washington Post. Nielsen’s midyear report found that hip-hop and R&B account for just over 25 percent of the country’s listening habits compared to 23 percent for rock.

As Kings of Leon (KOL) return to its Oklahoma roots with a performance at Oklahoma City’s Chesapeake Energy Arena Oct. 4, it’s one of the last American rock bands from the post-Strokes era that can still pack an arena. Imagine Dragons and Twenty One Pilots consistently play arenas, but their sound skews to pop while others like Zac Brown Band are decidedly more country.

KOL comes to OKC on the second leg of its tour promoting last year’s WALLS album, which became the band’s first album to top the Billboard charts. But even in its success, it shows how much the industry has changed since the band signed with RCA Records in 2002.

WALLS sold 77,000 album-equivalent units its opening week to top the Billboard 200 but dropped to No. 20 the next week. Overall, WALLS reached gold certification (100,000 units) in the United Kingdom.

By contrast, its 2004 album Aha Shake Heartbreak peaked at 55 on the U.S. charts but still went platinum in three countries. Of course, the decline in album sales and proliferation of streaming and YouTube has affected every artist.

It’s one of the reasons “geezer rock” concerts like Indio, California’s “Desert Trip,” AKA “Oldchella” with the likes of Bob Dylan, The Rolling Stones and Neil Young or this summer’s dueling Classic West and Classic East concerts with Fleetwood Mac and the Eagles have become so popular. Most of the money for artists can be made from concerts and merchandise instead of album sales.

Even with their local connection, Kings of Leon join the likes of Bruce Springsteen, Paul McCartney, Blink-182 and the upcoming appearance of Lady Gaga to perform at Chesapeake Energy Arena.

“[Kings of Leon] are probably one of the last groups we’ll watch go from scrappy garage-rock origins to scoring mainstream radio hits and headlining arenas and festivals with the old-school battle-stance of two guitars, a bass and a drumkit,” Ryan Leas wrote for Pitchfork in his review of WALLS.

Kings of Leon, comprised of brothers Caleb (lead vocals), Jared (bass) and Nathan Followill (drums) and cousin Matthew (lead guitar), return to the Oklahoma homestead located in Talihina every summer for a family reunion, unless their globetrotting schedule doesn’t allow it.

The 2011 documentary Talihina Sky: The Story of Kings of Leon, which premiered at New York’s Tribeca Film Festival and OKC’s deadCENTER Film Festival, depicts their time with family: playing horseshoe tournaments and fishing for crawdads in a river while also exploring their nontraditional upbringing under their preacher father Ivan.

The Followill boys spent much of their youth traveling through Oklahoma and into the mid and Deep South as their father went from revival to revival that lasted from Wednesday through Sunday as a United Pentecostal pastor, homeschooled by their mother Beth-Ann for a period of time.

“Being poor isn’t fun; it’s embarrassing, something you strive to get out of,” Caleb Followill said in Talihina Sky. “We were living in the worst of the worst ghetto in Oklahoma City. We literally had two pairs of pants for me and Nathan. I would wear one, and he would wear the other. Mom would wash them and [we’d switch].”

Nathan and Caleb got their start singing in church and originally moved to Nashville as a country duo. It was younger brother Jared who introduced his brothers to The Pixies and The Strokes, and they pursued a Southern garage rock sound under the guidance of producer Angelo Petraglia.

“Nathan and Caleb would pick up the hymnal and choose a song. By the time they were done, everyone would be crying. They had angel voices,” Ivan Followill said in Talihina Sky.

As KOL ventures forward in the shifting music landscape as one of America’s last arena rock bands, Oklahoma will remain part of the band’s identity. Nathan Followill plays every show with a miniature University of Oklahoma Sooners helmet affixed to his drum kit. Almost every photo of him on his Twitter feed includes a “horn down” hand gesture, antagonizing OU’s rival the University of Texas.

Kings of Leon with Dawes

Print headline: Talihina-bred; Kings of Leon returns to its native Oklahoma as one of rock’s last arena acts.

Kings of Leon with Dawes