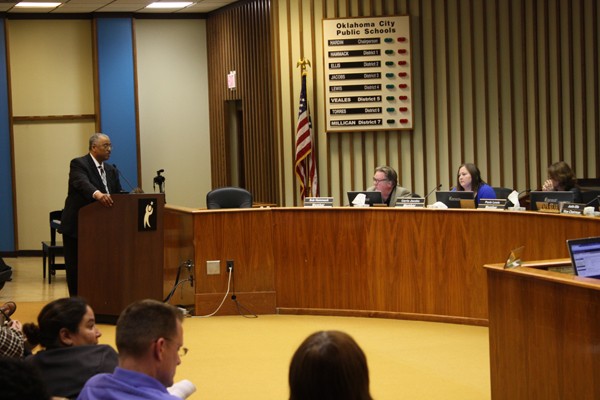 Tracy McDaniel stepped up to the podium, adjusted his tablet, looked up at the Oklahoma City Public Schools (OKCPS) Board of Education and smiled.

He had the attention of the eight-member board, district leaders and a packed auditorium in the OKCPS administrative building.

As the administrator of KIPP (Knowledge Is Power Program) Reach College Preparatory, McDaniel had waited years for that moment, and his opening statement hinted at his longing and enthusiasm to present his plan to “create a region of schools and have a greater impact” on Oklahoma City.

“Thank you to the board and [associate superintendent] Aurora Lora for giving us this opportunity to actually present our proposal to the district,” McDaniel said at the May 16 board meeting. “We have been negotiating for several months now, but we didn’t have the opportunity to actually present to the board and our community.”

It was a telling statement for those closely following the discussion of charter school expansion in Oklahoma City. More than 550 people participated in three community meetings intended to gather input on the KIPP charter expansion proposal. At those meetings, McDaniel shared aspirations for KIPP to grow into a prekindergarten through 12th-grade model. He described serving prekindergarten through eighth-grade students in an existing OKCPS building suitable for 900 students. Additionally, KIPP sought to share classroom space and facilities with an area high school.

McDaniel didn’t get into particulars. Specifically, he didn’t name school buildings targeted by KIPP leaders for such expansion. In fact, community meetings facilitators called for the public to share location ideas. The facilitators, district and KIPP leaders gave the impression that buildings hadn’t been discussed or decided.

The lack of information caused frustration, rumors ran rampant and some organizations hosted their own forums to discuss hearsay.

It wasn’t the way McDaniel imagined approaching the community about the KIPP expansion, but the longtime administrator said Superintendent Rob Neu told him not to name schools.

After months of keeping key details quiet, McDaniel presented his plans for the expansion. If the proposal goes through, beginning next fall, KIPP will be moved into Martin Luther King Jr. Elementary School to begin the process of converting the neighborhood school to its charter model. Additionally, KIPP would expand its network into Douglass High School.

The proposal turned over to district administration six months ago stated, “The most significant challenge for KIPP OKC, beyond ensuring appropriate facilities and funding before opening new schools, has been filling the academic gaps with which fifth-graders enroll and ensure the target population has first access to KIPP schools.

“To address these risks and provide high-quality programming earlier in each student’s educational career, KIPP OKC is planning to serve prekindergarten through 12th grade in the northeast community by restarting the Martin Luther King Jr. Elementary School and co-locating with Douglass High School.”

Oklahoma Gazette obtained copies of the November and May proposals through an open records request.

A key difference between the two proposals was the earlier proposal called for serving 1,250 southside students through establishing a KIPP OKC South elementary, middle and high school. The May proposal did not include such plans.

The discussion of charter school expansion has progressed over the past three months, although many might argue the community conversation wasn’t as anticipated. Initially, administrators of three successful charter schools — including KIPP — approached the school board in February with a plan called Quality Seats. Citing their desire to serve more students, the administrators sought to expand their charter models. While no specifics were explained, the administrators committed to following district leaders’ suggestions to gather community input before submitting proposals to the school board. Santa Fe South Schools and John Rex Charter Elementary School also participated in the Quality Seats program.

Neu cautioned the school board against moving forward without public input, prompting board consideration and the passage of a resolution guaranteeing a community conversation.

The resolution gave rise to facilitated meetings conducted by Possibilities Inc., a local nonprofit. Inasmuch Foundation, which holds ties to the three charters and the district, partnered to fund the meetings. Two weeks after the passage of the resolution, KIPP meetings were announced with district officials reporting more would take place.

Santa Fe South Superintendent Chris Brewster outlined the plans during the April 25 board meeting when presenting the charters’ contract for renewal.

“We won’t be doing community meetings in the same type of way because we are not looking for any existing buildings to convert,” Brewster explained when asked about additional charter expansion. “The only growth we would have is numeric, based on students applying and us having the room to accept them.”

In May, Lora — acting as superintendent — told media that John Rex leaders plan to present a proposal later this summer. 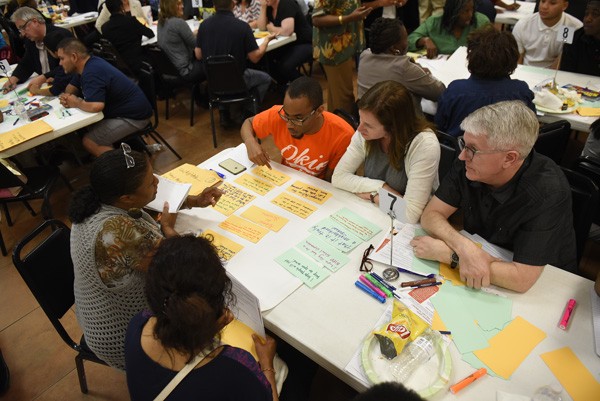 “We want a partnership with Oklahoma City Public Schools,” McDaniel said. “We want to expand our program. We are requesting to expand by going prekindergarten through 12th grade over time.”

Under the KIPP proposal, KIPP’s middle school would vacate the second floor of its rented F.D. Moon Elementary School space and move three miles north to Martin Luther King Jr. Elementary School, which opened in 2006 as a MAPS for Kids project.

For the first year, the two schools would share space and facilities. Beginning the 2017-18 academic year, prekindergarten and kindergarten students would work with KIPP teachers. Each academic year, KIPP would add another grade until the entire building — prekindergarten through eighth grade — is served by KIPP. Students from the neighborhood would attend KIPP.

For the high school expansion, KIPP proposes at least a 12-month study to examine and plan for KIPP and Douglass to cohabit. In addition to sharing facilities, McDaniel aspires for KIPP students to participate in Douglass’ extracurricular activities, including sports.

Before KIPP would take over any grade at the elementary level or begin a high school, KIPP leaders and OKCPS teachers would visit some of the best schools in the United States.

Funded by grants, both KIPP and OKCPS teachers would bring proven teaching practices back to Oklahoma City to benefit students, explained McDaniel.

“We want to raise the bar of excellence for northeast Oklahoma City,” McDaniel said. “We can, with a partnership, have a direct impact on students.”

Under the May 12 proposal, KIPP expansion would be complete in 2022 and the charter would serve 1,250 students in northeast Oklahoma City. The expansion plan calls for hiring school leaders, including a chief operating officer, director of operations, recruitment manager and associate director of development. KIPP also plans to hire 96 staffers, including teachers and counselors.

KIPP’s development plan relies on private funds to offset operating costs. The charter has secured grant funds from Inasmuch Foundation and the Walton Family Fund, a known supporter of charter schools, to accommodate the anticipated regional growth. Inasmuch Foundation awarded a $1.05 million grant for KIPP to expand its model in Oklahoma City in 2014. In fiscal year 2015, KIPP raised $1.2 million, according to the proposal document.

The school board could call the proposal to a vote at its next regularly scheduled meeting set for June 6.

With a proposal now before the board, McDaniel stands ready to answer questions about his plan, which is rooted in improving education in northeast Oklahoma City.