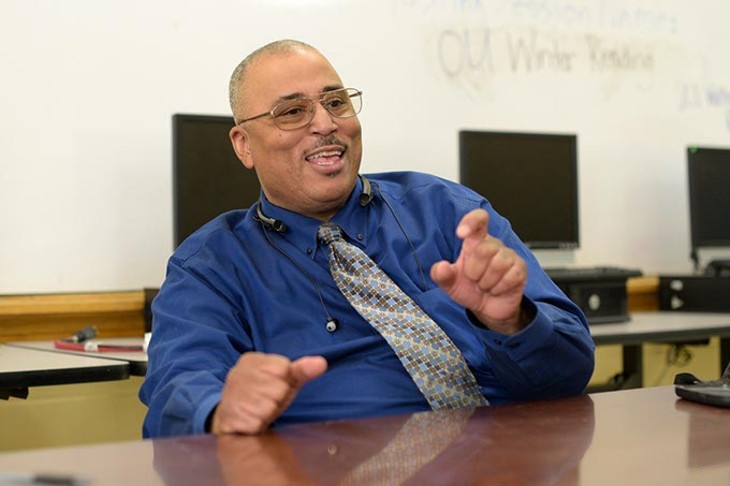 Back in the early and mid-1990s, charter schools — public schools operating independently from traditional district schools under a charter agreement — emerged as the latest hope in education reform. They were created to improve learning environments for traditionally underserved populations in urban areas, and the national spotlight began to shine on charter pioneers as they demonstrated strong academic progress and students delivered impassioned testimony.

The reports caught the attention of McDaniel, an Oklahoma City Public Schools alumnus from northeastern OKC. For McDaniel and his education colleagues, brainstorming the city’s first charter school was an escape from the frustrations of urban education, where low-performing schools too often resulted in massive student failure. McDaniel knew students who were failing did not have to fail. With the right resources and teaching methods, students — including those from the city’s poorest neighborhoods — could learn and succeed.

When serving as the principal of northeast OKC’s Moon Middle School in 1999, McDaniel earned a reputation for his relentless approach to helping young people succeed. His efforts didn’t go unnoticed, as OKCPS superintendent William Weitzel asked for a meeting.

Looking back at the meeting, McDaniel recalled Weitzel insisting the northeast schools needed a new academic model and McDaniel was the one to train and bring the KIPP (Knowledge Is Power Program) model to OKC. At the time, KIPP operated two middle schools but earned prestige for earning solid test scores from of its underprivileged urban students.

In the fall of 2002, McDaniel welcomed 62 students — the majority hailing from elementary schools with mediocre test scores and qualifying for free or reduced lunches — to the school’s classrooms located on the campus of Dunbar Elementary in the John F. Kennedy neighborhood. Within as little as two years, it was clear KIPP was the academic model Weitzel and McDaniel sought. Student test scores ranked among the best in the district.

Now in its 15th year, the small middle school is the state’s top academic performer and a star in KIPP’s national network. More importantly, McDaniel said, in the years since KIPP opened, hundreds of students have graduated. Many of them went on to the city’s most selective high schools and the nation’s top boarding schools, and many of its earliest alumni are now college graduates returning to Oklahoma City.

“I knew it was awesome when I got the KIPP job, but it’s beyond that now,” McDaniel said last week in an Oklahoma Gazette interview. “It’s hard even to describe. I didn’t think it was possible to do what I am now doing in education. In spite of the opposition, we are making a difference for kids. That’s the bottom line.”

A fourth-grade teacher played a key role in encouraging Annetta Oleru to apply to KIPP in 2003. Her interest was sparked when the teacher uttered, “school for smart kids.” Throughout her time at northeast’s Longfellow Elementary, Oleru’s report cards always showed top grades. But unbeknownst to her, Oleru had never scored proficient on a state-mandated test.

On day one at KIPP, Oleru learned a valuable lesson, one she needed to utilize to handle the rigors of KIPP and those in the real world.

There are no excuses.

“It was like no other school system I had been in before,” Oleru said. “You had to do your homework every night. There was a consequence if you didn’t. You had to stand up and apologize to every single member of the class.”

Oleru attended school from 7:30 a.m. to 5 p.m., followed by homework in the evenings. Anytime an assignment or a class lesson got too challenging, Oleru referred to the first line of the KIPP credo: “If there is a problem, we look for a solution.”

Oleru was raised by her grandmother. KIPP became her second family and pushed her to become an accomplished student. After KIPP, she attended St. George’s School, a prestigious boarding school in Newport, Rhode Island, followed by Loyola University New Orleans. With her bachelor’s degree, Oleru returned to KIPP as a fifth-grade teacher this fall.

Now, the learning tactics, including well-known KIPP chants and rhythmic clapping, are heard outside Oleru’s room. A major tenet of her teaching is shifting her students from a fixed mindset to a growing mindset, a key to her own success.

“Work hard, be nice,” Oleru said. “I’ll ask my class, ‘Are you graduating in 2024?’ They respond, ‘No; that’s the year we are going to college.’ It’s about having a goal in mind. ‘I am … setting myself up for the opportunity to go to college and make it all the way through college.’”

It’s not uncommon in Oklahoma for people to have confusion about charter schools. Oklahoma law first allowed for charter school accreditation in 2000. The rapid growth seen in other cities and states didn’t happen in Oklahoma, where charters were restricted to the state’s two largest public districts until just a few years ago.

KIPP Reach is a public school receiving funding from the state, but not local property taxes. KIPP is accountable to its authorizer, which is OKCPS, its board and the 300 students who fill the charter school’s seats on the second floor of F.D. Moon Academy, just north of KIPP’s original location. With fewer public dollars, KIPP requires grants and philanthropic support, a norm among charter schools across the nation.

Getting community buy-in has been a barrier to KIPP expansion plans. More than five years ago, McDaniel and Mike Feinberg, who cofounded KIPP’s first school in Houston, laid out initial plans for expanding the KIPP model into an elementary and high school model in OKC. While community support lagged, grant funding to secure initial phases of expansion increased.

Last February, leaders of KIPP, Santa Fe South Schools and John Rex Charter Elementary School approached OKCPS Board of Education about a concept called Quality Seats Program, an effort to expand all three charter models in the state’s largest school district. The program was met with mixed results. Much of the contention centered on the district appropriating buildings and resources to the charters, harming students left behind in the public schools.

In July, KIPP earned school board approval to begin an elementary program in an existing district elementary and start a high school in shared space on an OKCPS high school campus. The exact locations are to be explored by the Northeast Oklahoma City Community Task Force, which held its first meeting in mid-January.

The Quality Seats Program continues, as KIPP submitted a charter application for authorization of a KIPP school in south Oklahoma City this fall.

“If we can do more, we can change Oklahoma City,” McDaniel said. “We want to prove it.”

Feb. 2, KIPP Reach hosts its first Are You Smarter Than a KIPPster? fundraiser event, a quiz bowl-style event in which KIPPsters and community leaders will square off on facts. Funds raised support KIPP in its endeavors to expand.

Two common themes from KIPP Reach 2002 and KIPP Reach 2017 stand out in McDaniel’s mind. Students are succeeding and staff is constantly engaged in professional development training to become better educators. KIPP Reach has changed, students attend a shorter school day and staff works more closely with parents on how to support their students through the KIPP program.

Inside the school’s main office, college pennants hang from the ceiling and a plaque recognizing KIPP Reach as one of the top 50 middle schools in the nation hangs on the wall. A white paper sign with bold, black text reading “There are no shortcuts climbing the mountain to college” is easier to spot.

“I’ve seen it done before. The overtime you put into students will pay off,” Oleru said. “My teachers worked with me, and the hard work paid off. I see it now with my own students, and it drives my passion.”