Kirra breathes life back into rock 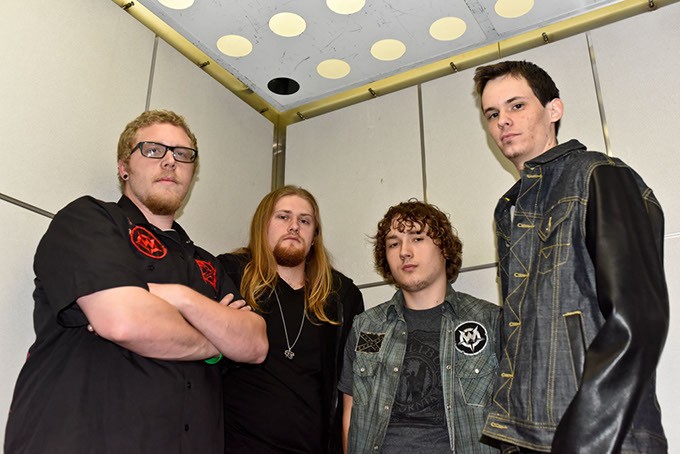 The famed bassist bereaved what he felt was the destruction of an art and lifestyle that his band Kiss caricatured to its most flamboyant (even comical) extremes.

Oklahoma City modern rock act Kirra mentions that eulogy in its band bio, and its fast-rising career might just be the most compelling argument against it.

“We’ve had the pleasure of opening up for some big-name bands and even just attending shows as fans at Chesapeake Energy Arena,” guitarist Daxton Page said. “You have to be a big band with a big following to play a place like that, so when someone says rock’s dead, I can’t help but point to that.”

Playing an engine-roaring brand of hard rock indebted to Chevelle, Seether and Pearl Jam, Page and bandmates Jesse Williamson (vocals, rhythm guitar), Ryne McNeill (bass) and Zach Stafford (drums) — who met each other thanks to a Craigslist connection — do recognize that even right here in the Midwestern heartland of rock music country, fewer and fewer young musicians play straight-ahead rock music, even if they readily consume it.

It might just be why Kirra (surf slang for moving with the ocean) has amassed the following and prominent gigs (opening for 3 Doors Down, Saving Abel and more) in such a short amount of time.

“The Oklahoma market is kind of starving for a normal rock act,” Page said. “It’s hard, because you get paired with heavy, death metal bands or indie bands. There’s not much of a middle ground as far as a normal modern rock band.”

Fewer club promoters are willing to book those sorts of bands either, he said, though Kirra has managed to find itself onstage at Hollywood’s Whiskey a Go Go and House of Blues. Page sees trends that are influencing that, though he’s positive there’s still a place for traditional guitar bands.

“Pop culturewise, there’s a rise in that heavier scene, and I think a lot of kids are focusing there,” he explained. “People want to do something that’s never been heard before, and I think it overcomplicates things sometimes. There’s an almost draught of normal rock bands because of that.”

With a collective dream of writing music and touring for a living, the four members hope that their new album, Run Away, will help get them there. It’s a heart-on-its-sleeve sort of record; chugging guitars and gunfire percussion meld into edgy backdrops for tender confessions of love, loss and struggle.

“A lot of the record deals with being in bad situations, be it family, friends or relationships, and escaping that to move on and have a better life,” Page said. “We try to be genuine about what we are singing about. I think people can tell that there’s a sincerity to it.”

On the strength of the new album, a slick new video for lead single “Fly” and an impending album release show with Kansas City grunge rockers Puddle of Mudd this Saturday at OKC Farmers Public Market, Kirra hopes that it can help keep that rock torch burning for some time to come.

“I feel like this album is going to open some doors,” Page said. “Listening to it, it’s like, wow. To be able to hear every little part is a gratifying experience.”

Print headline: Long live, Hard rock act Kirra chugs ahead with Run Away and an opening slot for Puddle of Mudd.