Kitchen No. 324 rates high in Oklahoma City for brunch, but is it a case of popular aesthetic over food?

Long before Anthony Bourdain became the celebrity host of travel shows that blend food with cultural context, he was a struggling chef. In his breakout book Kitchen Confidential: Adventures in the Culinary Underbelly, which started as a 1999 essay in The New Yorker designed to shine a light into the restaurant industry, he is honest about his skills.

While other chefs rise in the ranks, the only jobs Bourdain can find are for weekend brunch shifts.

“We despise hollandaise, home fries, those pathetic fruit garnishes, and all the other cliché accompaniments designed to induce a credulous public into paying $12.95 for two eggs. … You can dress brunch up with all the focaccia, smoked salmon, and caviar in the world, but it’s still breakfast,” Bourdain wrote in The New Yorker.

I couldn’t help but be reminded of Bourdain’s sentiment as I was searching for parking downtown close to Kitchen No. 324, 324 N. Robinson Ave., on a Sunday just after noon.

The restaurant has served as anchor to the building — once home to Braniff Airways — since a 2012 renovation, where diners have flocked to its large and bright dining room, making it one of the city’s most popular brunch destinations.

It underwent a small renovation earlier this year, which added a full-service bar and reorganized the kitchen to better accommodate an increased demand for its dinner service, according to 405 Magazine.

As more apartments are being constructed in downtown, dinner service figures to pick up at Kitchen No. 324, where dishes like braised boneless short ribs with blue cheese biscuit pudding ($25) and Romesco crusted salmon with quinoa and Brussels sprouts ($26) caught my attention.

However, I chose brunch for my first Kitchen No. 324 experience because breakfast / brunch still takes up more space on its menu than dinner. The early morning menu includes daily selections of curated coffees and baked goods, including a Joenut named after the restaurant’s original pastry chef; it’s Kitchen No. 324’s version of a cronut: a croissant-doughnut hybrid.

Despite what Bourdain lamented about price-gouging on the brunch menu, there is nothing on Kitchen No. 324’s breakfast menu that is over $12. I opted for the breakfast bowl ($10) because it contained two of my favorite things: Brussels sprouts and kale pesto.

Sweet potato, local McCabe’s bacon, avocado and a sunny-side-up egg join them for this entrée. Despite enjoying all the ingredients on their own merit, it didn’t feel like a cohesive dish. The pesto was in a clump and offered a surprising spiciness when paired with the bacon, but what was the avocado doing there too? It was similar in texture to the pesto and didn’t add much to the dish.

I feel like it would’ve been better to scramble the egg rather than serve it over-easy because it would’ve acted as a binder to bring the diaspora of ingredients together.

There is one menu item at Kitchen No. 324 that piqued my interest like no other: fried chicken pot pie ($16), which is available on the brunch, lunch and dinner menus. 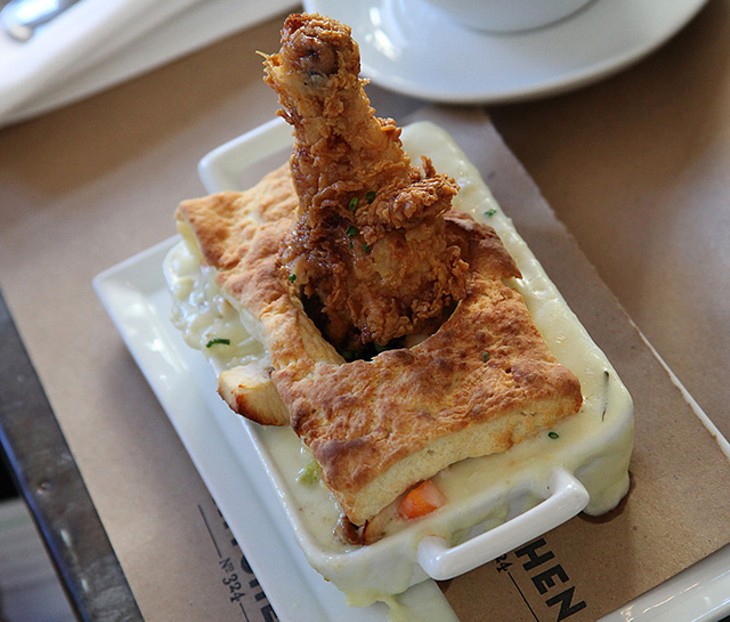 When I first saw the item on the menu with no added description, my mind began to race to fill in the blanks. Surely it’s not chicken that’s been fried, torn up and added to the filling, right? It would take away from the crispiness. Despite the rational voice in my head telling me this wouldn’t be the case, irrationality took hold.

“I wonder if it has pieces of fried chicken skin mixed in with the gravy,” said a voice in my head that might or might not have sounded like a certain infamous diner from Monty Python’s The Meaning of Life.

Alas, I couldn’t help but be disappointed in the execution of the fried chicken pot pie. Not only is the fried chicken element limited to a leg that stands precariously in a hole of its pastry topping, it’s not actually a pie. There is no bottom layer of crust.

I’m calling shenanigans on the entire food industry. Whose idea was it to call it a pot pie and only have a top layer of crust? I realize that chefs often want to keep things crispy, but my favorite part of a pot pie is when the bottom layer of crust absorbs the creamy gravy.

It’s a shame because the components of Kitchen’s No. 324’s pot pie work. The filling is a solid savory mix of carrots, onion, and (unfried) chicken. The fried leg was on the dry side and desperately needed gravy from the filling.

Kitchen No. 324 certainly has the look of a perfect brunch spot. The gleaming intricate marble and tile work, beautiful light fixtures and large windows with a terrific view of downtown are true aesthetic goals. I know Kitchen No. 324 is a great restaurant because A Good Egg has the Midas touch, but I couldn’t help but feel like my meal missed the mark.

Print headline: Brunch shenanigans; Kitchen No. 324 rates high in Oklahoma City for brunch, but is it a case of popular aesthetic over food?