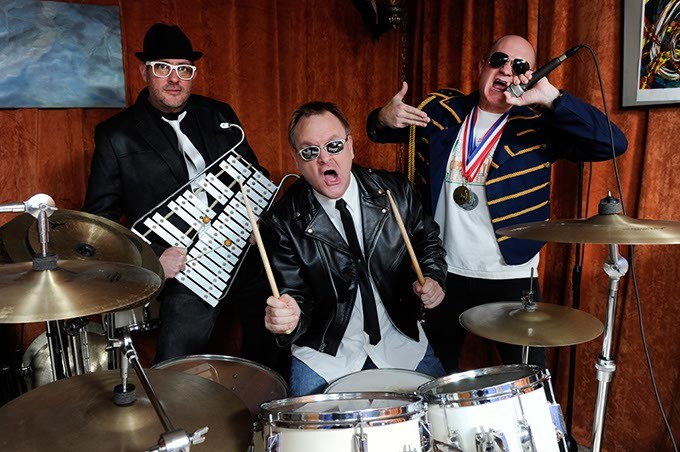 Fans did not take kindly to any of those sudden shifts from their favorite artists. Part of the reason was the execution, but fans also have a strange fascination with the idea that an artist can grow without changing.

Meet KlipHop. Or maybe you have already met. KlipHop is the rap alter-ego of Norman pop-rock band Klipspringer, whose last release was The Trouble with Sebastian in 2011. KlipHop released its debut, self-titled EP in November.

The band has been performing a KlipHop set here and there over the last couple of years to mixed reactions from its stalwart fans and friends.

“It’s hit-and-miss,” vocalist and emcee Ty Kamm said. “Half the people think we’re crazy or we’ve lost it and rap is crap. And then other people think it’s great; they get the humor in it, they appreciate hip-hop too. So it’s really split down the middle.”

Kamm, who raps under the “Tyrone Elliott” moniker, said there is good music in any genre and he has long held an appreciation for hip-hop. When he was younger, he said he loved groups like Public Enemy, Beastie Boys and Gorillaz. Even today, he still likes acts like Chance the Rapper and Aesop Rock.

A couple of years ago, while Klipspringer was practicing, Kamm said they started fooling around and doing hip-hop versions of some of their old songs. One of the first, he said, was “Losing My Lighter.” A West Coast, g-funk-inspired version of the song leads off the EP.

“If I remember correctly, our keyboard member started playing some of those sounds, and then (former) bass player Mitch kicked in with a groove,” Kamm said. “They were just jackin’ around, and I just started rapping ‘Losing My Lighter’ to it, and I think that was the birth of KlipHop right there.”

At first, this exercise in rhythm was for their ears only, but they kept developing the concepts further and further.

“Then we kind of started realizing, ‘You know, some of this isn’t bad; this is kind of good,’” he said. “At least we were like, this is OK for a bunch of old white guys, you know?”

When they started recording for this EP, Kamm said a noticeable difference for him was the complete lack of guitar. For the first time on a Klipspringer project, Kamm doesn’t play a single instrument. Not having a guitar also changed the order in which they like to lay down their tracks.

Despite not playing guitar on the project himself, Kamm said he is proud of the EP’s musicianship, especially the work from keyboardist Chris Bourland.

“He painted that entire landscape of sound,” he said.

Kamm also found that when rapping, you have to keep the lyrics coming.

“When you’re singing or whatever in a rock band, if you space out and forget a few words, you can fake it,” he said. “You can just use phonics and sing the melody and mumble some stuff; but if you’re rapping, you can’t do that.”

Thankfully, most of the lyrics used on KlipHop are from classic Klipspringer songs, but some words were added later to make it work because you move through lyrics faster when you’re rapping them.

He used to tell critics of KlipHop that they were a tongue-in-cheek act, which is true. They’re nerdcore, he said, and people know it’s odd to see a middle-aged white band on stage, trying to perform hip-hop, so they have fun with it.

But after Kamm’s wife saw KlipHop perform on stage, she was not convinced. She said they looked like they weren’t really into it.

“People can tell if you’re not feeling it, if it’s not real,” Kamm said. “If we were up there, just purely making fun or something, then that wouldn’t cut it either.”

Kamm insists that they’re not out to make light of rappers or hip-hop — quite the opposite. The band members hope to partake in a genre they have all come to appreciate.

And while he said he has had fun recording as KlipHop, Kamm said he can’t see Klipspringer going off to record a country record or any other cross-genre experiments.

But he also said he would never rule it out entirely.

“Back in my young punk days, I never thought that I’d be attempting to rap in a hip-hop band, but I love it,” he said. “I think it’s awesome. It’s so much fun.”

Print headline: Reloaded Klips, To the joy of some and disdain of others, Ty Kamm brings rap into old Klipspringer sound.