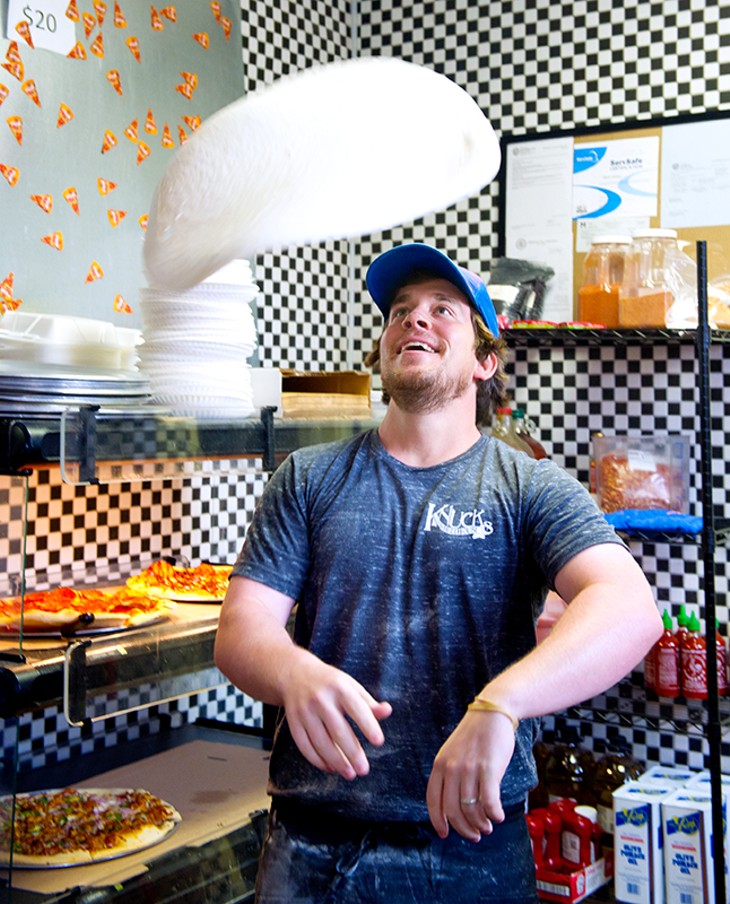 Owner Drew Mains has put a lot of hard work into what might seem like an overnight success story. Mains and his wife, Anna, also own In the Raw, another Bricktown concept. When they set out on their pizza adventure, Knucks Wheelhouse, 103 E. California Ave., their approach was slow and methodical.

“See, we’re restaurant people, but we’re not necessarily pizza people,” he said. “We spent some time in New York, of course, and even ventured out to California to see what was in pizza trends out there.”

The couple ended up doing most of their research at a pizza joint in Colorado, picking up tips and tricks along the way about toppings, recipes and cooking methods.

The result is Knucks Wheelhouse, which quietly opened in February.

For now, the couple enjoys a steady increase in business, especially in the lunch crowd around downtown. They also have quite a lot of business during the evenings because of bars in the area that don’t serve food. Drew passes out menus to the local watering holes and encourages delivery orders throughout downtown.

The menu offers a hand-tossed, New York-style crust made with COOP Native Amber ale and a variety of options for toppings.

“The Hoochie Cuchi is by far our most popular,” he said. “It’s bacon, prosciutto, mozzarella, pecorino with a marinara base and pesto sprinkled on top.”

Have no fear; they do a brisk business with classic pepperoni as well. Mains said that if there is anything that is more popular than their pies, it’s the duck fat truffle fries, which are quickly earning “legendary” status among diners.

“It’ll make you sweat for sure,” Drew said.

The Mains’ vision is to maintain a local friendly spot in the heart of Bricktown. Drew wants to have a restaurant that focuses on other local businesses and for which the community has a sense of ownership. He has festooned the place with decor that speaks to local business; there is memorabilia from the Academy of Contemporary Music at the University of Central Oklahoma (which is also located nearby) on the walls and native craft beers on tap.

“We want to have a place where more local people would be proud of and want to hang out in Bricktown,” Drew said.

Knucks is open until 3 a.m. Fridays and Saturdays for hungry barflies making their way home.

Print headline: In their Wheelhouse,

One local couple hopes to establish more than a pizza joint — they want a community experience.