KOSU and The Spy are making some tweaks to their programming, bringing new music shows into the market

Keep your Shazam apps ready at the hip because a wider world of weekend music discovery is about to open up on local radio.

KOSU 91.7 FM announced in early September that it was making some changes to its programming lineup, including four new shows coming to The Spy and its roster of locally produced music programming.

The station launches its new programming schedule Monday. Aside from some new shows and shifting time slots, the biggest change listeners will notice is a shift in specialty programs to the weekends and afternoons, with longer shows found in the morning hours.

The first new show to air will be No One Man, which begins 11 p.m. Friday nights. The show, hosted by Bowlsey drummer Don James, is an eclectic look at hip-hop, funk and soul.

Oklahoma City-based rapper Jabee co-hosts another new hip-hop show, Grand Union Radio, with Chelsey O at 11 p.m. Saturday. The show will focus on hip-hop culture and history while keeping an eye on the contemporary local scene.

Jabee said he has been interested in getting into radio since he started podcasting from tour a few years ago.

“I want it to be a hip-hop show for old and new hip-hop listeners — playing great music and not the same 11 songs,” he said.

The show Tune In Tulsa, produced in Tulsa’s Woody Guthrie Center by John Cooper of the Red Dirt Rangers and hosted by Julie Watson, airs 5 p.m. Sundays and explores the areas in which music intersects with the lives of the local community.

Following Tune In Tulsa at 6 p.m. will be Okie Vintage Vinyl, a show in which longtime rockabilly musician TJ Mayes plays selections from his voluminous collection of old Oklahoma 45 records. Mayes is also the husband of Juke Joint Revival host Jenni Mayes. Her show immediately follows her husband’s at 7 p.m. Sundays.

In addition to the new music discovery shows, KOSU is also moving its popular The Spy with Ferris O’Brien to a more prime-time slot 7 p.m. Monday-Thursday. 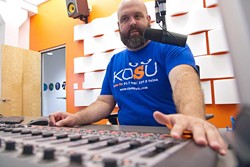 It had been more than five years since KOSU had taken a comprehensive look at its programming lineup. What spurred this year’s shake-up was actually the end of syndication for the popular national show Best of Car Talk.

When host Tom Magliozzi died in 2014, Car Talk began a new format rerunning classic segments from the long-running program. However, production of Best of Car Talk is coming to an end Saturday.

Knowing they would have to find a new show to replace it in their lineup, KOSU associate director Rachel Hubbard said the station decided it was a good time to reevaluate all of its programming. Freakonomics with host Stephen Dubner moves into the now-vacated 9 a.m. Saturday slot.

“Historically, the weekends have been a time of music discovery and a time when different genres could find niche audiences,” Hubbard said. “We’re returning to that programming strategy.”

With the additions of No One Man and Grand Union Radio, The Spy is beefing up its music discovery offerings on hip-hop. Hubbard said its listening audience is getting younger, so it made sense to add shows that appealed to the next generation’s interests.

“Musical tastes are always changing, and that was a part of music discovery we didn’t have — or hadn’t had in the last few years — on our lineup,” she said.

The reasoning for KOSU’s shift is partially supported by data the station has been collecting over the years.

Listener habits are changing, not just for the local audience, but in all radio markets. People are listening for shorter chunks of time than they have in the past. Radio programming has now been mostly worked into multi-tasking routines or as audio filler for drives around town.

“Life is busy,” Hubbard said. “I think that the thing we’re trying to do is we’re trying to give people lots of joining points so they never feel lost in the middle of our programming schedule. They can hop in, whether it’s on The Spy or the KOSU weekend schedule, and always feel like they can pick up and be a part of that audience.”

This is not to say that long-form radio is dying out. Podcasting has actually made longer narrative shows a popular listen. The advantage of a podcast over radio broadcast is that listeners can pause and restart a podcast at their own convenience or choose a time that works for them to begin listening. The Spy’s dating-themed show Dates of Our Lives is transitioning to a podcast-only format with the new lineup changes.

Hubbard said KOSU and The Spy pride themselves on being able to push the envelope and change along with their listeners.

“One of the things that we’re committed to is being inventive and being creative,” she said. “Oklahoma has proven to be a really creative community, and we feel like we have to keep pace with that.”

That means accepting change. Going against an established routine is never easy, but sometimes it can be for the better.

Hubbard said KOSU is open to hearing what listeners think of the new programming. She is excited about the station’s new music shows and is eager to see how audiences receive them.

Print headline: Radio shuffle, KOSU and The Spy are making some tweaks to their programming, bringing new music shows into the market.