KXY a radio staple for more than 30 years

That prompted angry calls from irate rock listeners and even bomb threats against station personnel. But there was no going back, and a short time later, “KXY,” as it is now called, was No. 1 not only in Oklahoma City but in the nation, and “Dave and Dan,” the morning team, became legends in the market.

“In 1991, KXY had the highest audience shares of any station in the top 55 U.S. markets,” said Bill Hurley, market president of iHeartMedia, KXY’s parent company. “We were No. 1 in the USA, and Dave and Dan’s audience was more than three times that of our nearest competitors. During that period, we consistently ranked in the top two or three radio stations in America. It was an incredibly fun time to be surrounded by talents like we had.”

Today, KXY has reinvented itself with a fresh, new morning team and the station remains one of Oklahoma City’s longest-running continuous formats.

Bill Reed began working as KXY’s midday announcer in the early ’90s. Now, he is program director and morning show co-host. Together with Shawn Carey, another longtime Oklahoma City air personality, they make up “Bill and Shawn in the Morning.” 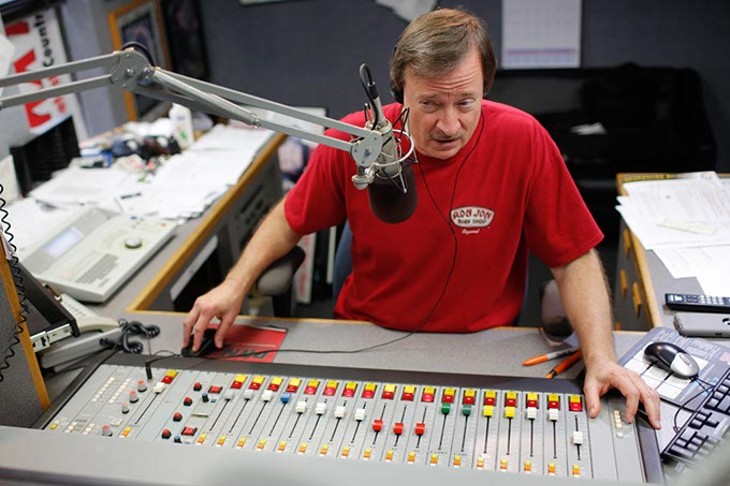 “Our listeners are our friends,” Reed said. “We know them by name, and they know us. It’s a privilege for us each time we are blessed to open the microphone and talk to them. So we want everything that goes out to be fun yet informative — whether it’s about a song, traffic and weather or just someone having a garage sale. That’s what being an Oklahoma City radio station is all about.”

“I have been incredibly blessed to have been able to begin and sustain my career all in Oklahoma City, my hometown,” said Carey. “Now, being on the air at 96.1 KXY, a station I have been such a big fan of since the ’80s, that is like an incredible dream come true. Bill and I are friends — we are genuine; we enjoy sharing personal stories about our own families and life experiences.”

When KXY first went on the air in 1982, Reed says country music was riding a wave of popularity. The John Travolta movie Urban Cowboy did for country what Saturday Night Fever did for disco. Those Urban Cowboy days gave way to what he calls the “Garth years.”

“Music is cyclical, especially country,” he said. “In the late ’80s, it took a more traditional sound, then smoothed out somewhat with Shania Twain in the ’90s, and in the 2000s, you had more of a rock edge when guys like Luke Bryan and Eric Church came on the scene. It’s interesting that 2015 is a big year for artists from the ’80s and ’90s. Folks like Garth, Alan Jackson, Shania and Tanya Tucker are all doing big tours.”

The station’s music has undergone a gradual shift to “classic country,” and today, KXY embraces the songs and artists that helped make the station a powerhouse back in the day.

“We are not following any fads or niches,” Reed said. “The music we play on KXY covers a wide range of years, from Patsy Cline to Reba, Waylon and Willie to George Strait and George Jones. Chances are our listeners remember where they were when they first heard the songs we play.”

Being an Oklahoma landmark is a label Reed takes seriously. The station has been on the air through the highs and lows of the past 30 years. On April 19, 1995, KXY was one of the first stations on the scene following the Oklahoma City bombing.

The station was at NE 28th Street at the time and was close to downtown.

“Nobody had ever been through a disaster like that,” Reed said. “So we had to stay as focused as we could on the latest developments, all the while knowing these were our friends and neighbors — even family members — that were killed or injured on that terrible day.”

The station spent the next few days fielding calls from all over the world and covering the story 24 hours a day.

“I finally sat in my office that Friday morning and broke down as the enormity of it swept over me. I still feel that every time I visit the memorial,” Reed said.

One of the artists who called in to express their sympathy was country singer Pam Tillis, who was a nominee for the Country Music Awards Female Vocalist of the Year in 1995.

“I remember I was on a plane headed to Los Angeles,” Tillis recalls. “I was dumbfounded something like that could happen right here in the heartland of America. I have some good friends in Oklahoma, and I was devastated.”

Today, with iTunes and satellite radio, KXY still holds its own by doing what it has done for more than three decades: giving listeners a wholesome local radio station they can call their own.

“Each person who takes time out of their busy day to punch in 96.1 KXY deserves our best effort,” Reed said.

Print headline: Station celebration, KXY has been on the air for more than 30 years.