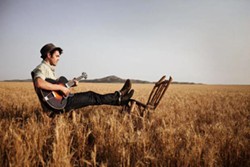 Kyle Reid did not start playing music until he was in high school. The Norman-based artist took an atypical path to being a professional musician. After graduating from high school in Edmond, he majored in physics at the University of Oklahoma (OU).

“When I picked my major, I basically wanted to be Issac Newton” he said. “I finished the degree. It’s in my closet, and I have no idea what to do with it.”

Fate and pop culture intervened in the life of the nascent scientist in the form of Back to the Future. Yes, the movie. It is true there were other factors, but Reid remembers Marty McFly rocking “Johnny B. Goode,” and he also wanted to be Chuck Berry at that moment.

The 27-year-old now sings, writes and plays, mostly with his band, The Low Swingin' Chariots. How does a physicist-rocker end up playing swing? That, too, was an indirect path.

“I met people at OU that turned me on to Django Reinhardt and gypsy jazz,” Reid said.

Concurrent with Reid’s quest to make music nationwide, bands like Squirrel Nut Zippers were reviving swing, even swing fused with gypsy jazz, blues and other forms of roots music. Reid counts them as an early influence, too, but ultimately, it was the music itself that drew him in.

“I had to start writing and singing just to make money,” Reid said. “If you only play an instrument, you’re always dependent upon someone else to show up to gig, like a singer. Initially, my writing wasn’t that great, but swing opened up my creativity.”

For Reid, swing represented two things: a well-defined challenge, which suited his scientific mind, and music that uplifts.

“When I listened to swing, it made me feel good,” he said. “At the same time, writing for the well-defined parameters of swing made me focus, and it opened up my writing.”

Reid has been performing swing ever since, and on July 24, he will open the latest installment of the Southern Sound Concert Series. The show will feature Town Mountain, and Grammy-nominated John Fullbright will headline. Fullbright was originally a member of Turnpike Troubadours before launching his solo career.

Reid has played with Fullbright before, and it has always been a good experience.

“We play a lot of the same kinds of events and venues,” Reid said. “At last year’s Peace, Love & Goodwill Festival, he was kind enough to invite me up on stage to play a few songs with him.”

The Southern Sound Concert Series is the creation of Josh Stratton. After returning from a national film tour, Stratton said he was caught off guard and disappointed that some local artists do not get the regional or national attention their talent warrants.

To help rectify that, he developed the series to put up-and-coming local artists on a stage with nationally known acts like Fullbright and Lone Bellow, the first national act he brought to the metro.

“There are plenty of acts that are well-known on the coasts or different regions of the country,” Stratton said, “but they may not be well-known here. Putting our local artists on stage with them may provide a connection or opportunity to get the music of our up-and-coming local artists beyond Oklahoma.”

John Fullbright with Town Mountain and