As Oklahoma’s largest champagne lounge, The Eleanor is about more than popping bottles. 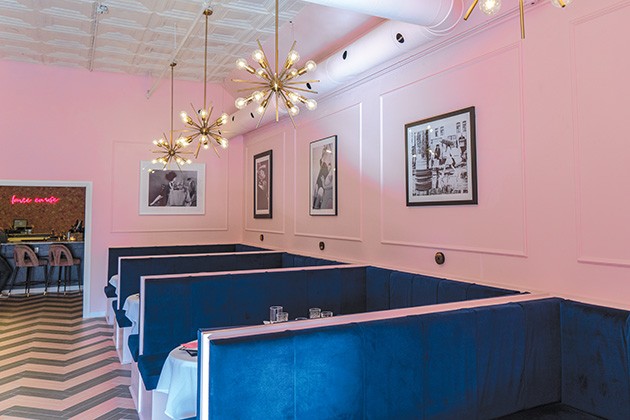 Eleanor of Aquitaine is one of the most famous and powerful women in history, as she became the queen of France (1137-1152) and of England (1154-1189) and led the second crusade to the Holy Land during her rule in the High Middle Ages.

Her legacy been portrayed on screen by the likes of Katharine Hepburn and other stars all the way through the 2010s.

When local entrepreneur Amanda Bratcher was planning a feminine-themed bar centered around sparkling wines, small plates and Instagrammable atmosphere, she kept coming back to Eleanor of Aquitaine for inspiration. The royal is the namesake for The Eleanor, 317 NW 23rd St., which opened in mid-December 2019 and is Oklahoma’s largest champagne lounge.

“[Eleanor of Aquitaine] was known for being extremely powerful, wealthy and not taking you-know-what from anyone,” Bratcher said.

Much like the strong-willed reserve of The Eleanor’s namesake, Bratcher helped oversee a painstaking 11-month process to convert the space that formerly housed The Rockford, which saw everything except the ceiling replaced, to create a bright dining area, a showstopping bar, a green space entryway and an upstairs lounge perfect for private events and casual conversation.

“This is my vision, my baby,” Bratcher said. “This is a place that I’d want to go to hang out. If I were going to meet friends, have a meeting or answer emails after work, those were the things that were in my head while we did the build-out. I want this to be a place where somewhere like me would like to go.”

Even before the name The Eleanor was decided, Bratcher said she wanted to open a lounge where women could relax, which is unique to the market. There are plenty of places to drink and have fun, but they tend to be more like sports bars, dive bars or clubs.

“It’s a space where women can feel comfortable, and it doesn’t really exist in Oklahoma, let alone anywhere I’ve seen in the country,” Bratcher said. “There is one thing slightly similar in San Diego, but it’s a coffee shop. Bringing something that is unique and original to this market was probably still my favorite part. People ask me to compare it to other things, but I can’t, which I like.”

Bratcher spent a month alone trying to find the right shade of pink to cover the walls, which builds into The Eleanor’s theme, la vie en rose, which means “life in pink” in French.

“I was hesitant to do the all-pink thing at first because I didn’t want to it to be loud or feel like a baby’s bedroom,” Bratcher said. “It’s not a loud or a soft baby pink, a good in-between.”

Bratcher worked with an interior designer to create a layout for the lounge and then took over from there. Designing the space from its signature flower wall in the bar to getting pink porcelain tiles that look like wood in a distinct Chevron patter shipped from overseas.

“Delving into the design side really forced me to get uncomfortable and activate my right brain that has been overshadowed for quite sometime,” Bratcher said. “I am extremely proud of the final product of the design and overall aesthetic of The Eleanor.”

The Eleanor’s logo incorporates flowers, a crown and both strong feminine and whimsical aspects, which wrap up the lounge’s ethos in one image. Patrons that come through the entrance off 23rd Street are greeted by a large, stuffed unicorn, and a main dining area has a picture of another famous Eleanor, First Lady Eleanor Roosevelt. Another entrance with mirrors and green leaves features a portrait of Eleanor of Aquitaine.

The Eleanor is much more than just a champagne lounge or only a place for women. It also features a full liquor menu and beer to go along with small plates.

“We’ve had just as many men come in and had plenty of all-male groups,” Bratcher said.

The food menu is designed to accentuate pairings with sparkling wine like small bites of truffle Parmesan popcorn, Sonoma-marinated olives. There is also portabella mushroom ravioli with basil pesto ($12), grilled cheese with fire-roasted tomato ($12, plus $3 for prosciutto), Nantucket lobster and shrimp salad served with crostini and arugula ($16) and a charcuterie board ($15 small, $30 large). Sweets include chocolate-covered strawberries ($16), strawberry hazelnut wafers ($9) and a macaron plate ($12).

Sparkling wine is the star of The Eleanor’s menu, where it’s the centerpiece to nine sparkling cocktails, while Prosecco, Champagne, California brut and rosé are available both by the glass (on the lower tier) and the bottle. 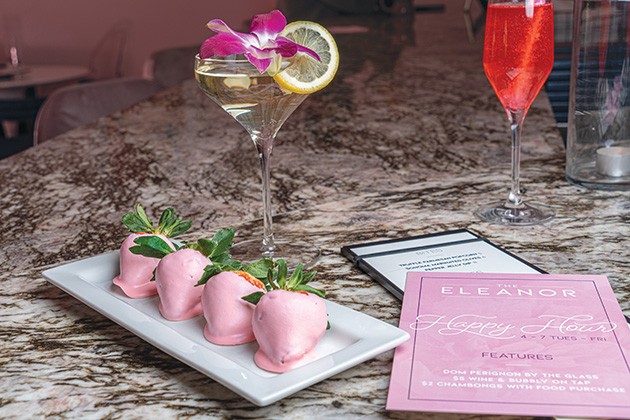 “As far as I’ve seen, we have the largest sparkling selection in the state; there is something for everyone,” Bratcher said.

With a unique position in the market, Bratcher said, The Eleanor is already receiving interest to expand across the region.

“[The reception has] been fantastic,” Bratcher said. “We haven’t had very much slow time, which has been a dream. The staff has been incredible with training and delivering the ultimate experience for what I envisioned for coming to The Eleanor.”