Releaf Labs has quickly risen to become one of the most visible medical cannabis distillate cartridge brands. 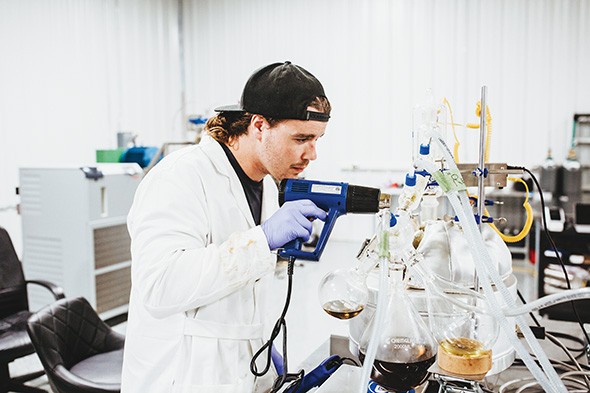 Releaf Labs was born out of the urge to move patients toward cannabis and away from opiates.

“My father was a 20-year opiate painkiller addict. He passed away in September but was unable to break free of that,” CEO Mike Girocco said. “We looked at this as a safe alternative to opiate painkillers and the addiction inherent with that product. So that was kind of the beginning of it. And we’ve been kind of running full speed since probably a year ago June. We started manufacturing in January. And we’ve risen to one of the top vape brands in the state.”

Releaf Labs started in a 4,000 square-foot building on Sooner Road while its larger, state-of-the-art CO2 extraction facility was being built in southern Logan County.

“We started out with pre-rolls because that was just the easiest way to get a product to market. And then, toward the end of January, we started actually processing and we came up with a one-gram distillate cartridge. That’s basically been our flagship,” Mike Girocco said. “Sometime in March, we came out with a disposable half-gram pen, kind of an all-in-one product, which has been very popular, and we feel as the market grows and new users come, it will even increase in popularity.”

The MSRP for the one-gram cartridge is $60, and the half-gram disposable cartridges have an MSRP of $45. There is no MSRP for the pre-rolls. To date, Releaf products are in more than 90 dispensaries.

“Julie and I lived in southern California for 20 years. We moved here in 2016, and we saw kind of the way that the industry had come up in California. As soon as we had an indication that we were going to legalize State Question 788, basically I started flying back and forth to California and meeting with former associates, meeting with consultants, extractors, dispensary owners, just kind of doing the math. We wanted to have something that was scalable. We kind of looked down the road maybe four to five years — Julie thinks less — and looked at it as ‘We need to be poised for regional expansion kind of in advance of national legalization.’ So we picked processing because we felt it was the most scalable. You could establish a prominent brand with not all the pitfalls and pain in the ass that a dispensary and retail is. Growing, on the other hand too, we knew that there was never going to be a moratorium on the number of grows. I look at it as financial barrier to entry. We looked at dispensary as the easiest barrier to hurtle, the second one was grow and then the third one was processor,” Mike Girocco said. “You can imagine what the commercial realtor in LA is like, especially if you’re on the investment side. You’re an absolute guppy. Here, I feel like I can at least be a perch. So when I moved out in 2016, we had already purchased some office buildings and then proceeded to purchase some additional apartment buildings. And that’s kind of my background, multifamily real estate, essentially.”

Mike Girocco’s mother moved to the state in 1976, so he has deep Oklahoma roots even though he has spent the past two decades halfway across the country.

which kind of is a
double-edged sword."
—Mike Girocco tweet this

“We moved out here because of Mike’s family. I was not intending to come work in this at all. I had my corporate job. I ran a sales department for a U.S. media company and did that from California. And then they allowed me to do it from here when he wanted to move out. And they just started getting busy. It grew really fast from ‘Here’s a new small business’ to ‘Oh my gosh! We’re going to have the capacity to be one of the biggest producers of distillate in the state.’ And he said, ‘I’m going to need a sales department. We’re going to need to figure out how to how to get it there.’ And so I left my job on February 26th and I started here on February 27th,” Julie Girocco said.

“I took her to dinner that night. That was her sabbatical,” Mike Girocco said.

“And it was my birthday too. ‘Oh yeah. It’s your birthday. We’re going to dinner. Tomorrow, you start,’” Julie Girocco said.

Releaf Labs does not grow the flower it uses in its products.

“We have alliances with growers. Actually, our brand manager’s father moved out from Huntington Beach, California, to actually do it here. He was formerly from Oklahoma and grew up here. And he was looking for an opportunity to get back away from all the crazy state regulations and barriers that they put up,” Mike Girocco said.

While they have been in operation for less than six months, Releaf has created one of the most visible brands in the industry.

“We have the number one position on Weedmaps, which kind of is a double-edged sword. It promotes our brand, but it also puts a target on our back. I think that we become a target for our competition. I can’t prove it, but I would guess that some significant negative reviews have come from our competition. They’re just kind of taking potshots at us. I would never do that. I would never or allow any employee to do that to the detriment of any competitor,” Mike Girocco said. “We have we’ve had some skin knees and bruised elbows from cartridge malfunctions that have primarily come from failures at the manufacturer level.”

Since all of the vape cartridge manufacturers are in China, Releaf did its own research and development as well as poll industry experts and consultants to choose which product it uses.

One such cartridge failure already did occur, and Releaf honored returns at the dispensary level no matter how much or how little distillate was remaining in the cartridge.

“You don’t know who you lose is the problem. You don’t know which patients. People are really nice here. California, people will just kind of say it like it was and they didn’t care if they hurt your feelings or whatever. People are so nice here. Like, ‘Just please tell me what you really think,’” Julie Girocco said. “People are all in this business because they have chosen to be here and they’re getting into it and you’ve got all the excitement of a new business in Oklahoma. So that’s been really fun. It’s getting more challenging. It’s getting a lot more competitive out there to get our products into dispensaries. But it’s good. I mean, we think we’re going to do well with a challenge.”