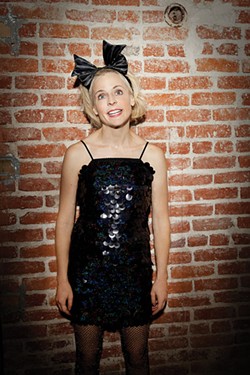 Maria Bamford presents her anxieties on stage and brings her comedy to Mitchell Hall Theatre at University of Central Oklahoma on Sept. 9.

Bamford’s tour comes on the heels of her Netflix Original breakout comedy Lady Dynamite. The series features Bamford as a fictionalized version of herself as she restarts her life in Los Angeles after spending six months in treatment for bipolar disorder. Bamford said the character is heavily influenced by her own struggles with anxiety and depression.

“Relationships with everyone, including myself. I’m obsessed with connecting better because I’m not very good at it,” said Bamford as she discussed the aspects of her personal life she draws into Lady Dynamite.

Her sense of humor about her mental health has long been a prominent feature of her stand-up work. She said a recent change helps keep her in check.

The link between creativity and depression continues to intrigue behavioral scientists, and Bamford has found success using both as fodder for her comedy.

In addition to her stand-up tour, she is writing a book, working on a comedy special and preparing for the second season of Lady Dynamite. Much has changed for the comedian, voice actor and actress since her teenaged comedic debut.

“I’ve got a great meds cocktail that’s been working the past five years,” Bamford said. “It’s miraculous. I have done a lot of therapeutic work, but I’ve got to say meds have been the game-changer from Hangman to One Big Blob.”

Bamford said One Big Blob is a hippie playground game that involves running and cooperation.

Also, a part of her stand-up act in her early career was playing violin between jokes. When asked whether she contemplates bringing the instrument back into the fold, her well-recognized tendency toward self-depreciation shows as she admits it crosses her mind.

“Sometimes,” she said. “Not enough to lay down 100 bucks on a starter instrument, but who knows? Everything is possible with a daily 1,000 milligrams of Depakote in the evening.”

Bamford was blunt as she explained the medication does have its downsides, especially now that she plays the lead role in Lady Dynamite, a show created by Mitchell Hurwitz (Arrested Development) and Pam Brady (South Park).

“The meds I’m on also take away the manic stamina I once had, but that’s the trade-off for contentment,” she said. “I don’t mind feeling sleepy.”

She began her stand-up career at age 19 in Minneapolis, Minnesota. In the years since, Bamford watched the stand-up landscape change in multiple ways, particularly in diversity.

“There are also, thankfully, many more wonderful young women, LGBTQ and people of color performing all across the country, it seems, or I hope,” she said. “Like it’s much less explaining yourself when you perform, like ‘I’m a woman,’ what I feel like where I’m defensive about having the right to be a comedian.”

She said audiences and venues are more accepting of nonwhite, non-male comedians than they were in her early years of stand-up.

“You can just do comedy. You don’t have to call anything out like, ‘I know what you’re thinking: another trans female in a hijab with cerebral palsy doing observational humor about hip-hop,’” she said. “You can just talk about whatever you want to talk about. You don’t have to have your appearance, culture or sexual identity be the center of your whole act if that doesn’t interest you. Just like white dudes!”

Print headline: Serious schtick, Comedian Maria Bamford finds success and creative inspiration in self-depreciation and opening up about her own mental health.