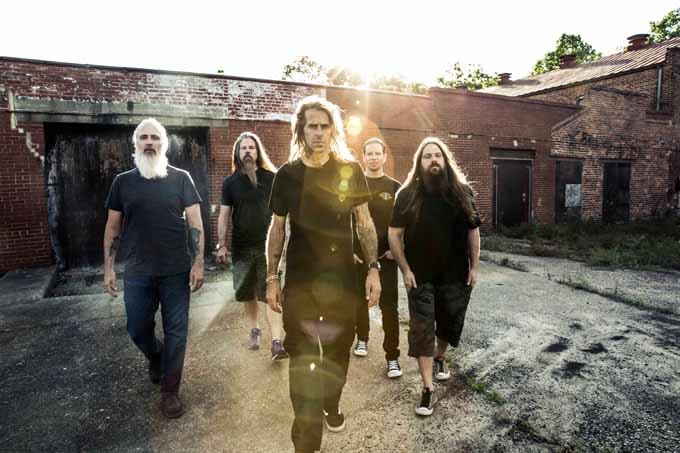 If you’re looking for a mosh pit, here it is.

Heavy metal tours do not get much bigger than Lamb of God and Anthrax. The metal icons slam into Diamond Ballroom Feb. 9 at 8001 S. Eastern Ave.

On one hand, Lamb of God (LoG) is in its commercial prime. Its most recent album, VII: Sturm und Drang, debuted at No. 3 on the Billboard 200, the act’s fourth album in a row to premiere in the top 10. It was the band’s first album since vocalist Randy Blythe was released from a Czech Republic prison following a 2013 manslaughter acquittal related to charges he faced for an incident at a 2010 show.

Anthrax, however, founded 13 years before LoG in 1981, has graduated to legend status. The band is widely regarded as part of heavy metal’s Big Four, along with Metallica, Slayer and Megadeth.

Despite the longevity of Anthrax, Blythe, who spoke with Oklahoma Gazette by phone before the start of his tour, does not view the relationship between their groups as that of mentor-mentee.

There was a time when that dynamic was a little different. Blythe said Anthrax was the first of the Big Four bands to take LoG out on tour.

Now, LoG finds itself on top of the bill. Blythe said the two acts have a good, friendly relationship.

“I’m looking forward to hitting the road with them again,” Blythe said. “I’m going to sit around and hopefully get some time to geek out about comic books with [Anthrax guitarist and original member] Scott Ian, you know?”

Blythe encounters a number of younger bands. In some ways, he said, there is always a level of excitement that reminds him of his younger years. However, in many other ways, he said this is very much a different era for bands attempting to break.

“[New bands] have so much more to contend with,” he said. “A, there’s about a million more bands. B, there’s the Internet. There’s really no underground anymore, I don’t think. I think the Internet has killed the underground.”

Increased accessibility, he said, actually makes things harder on new acts. While it’s great that everyone has the ability to record at home, Blythe said this has also led to an Internet saturated with a lot of “shitty, shitty music.”

Lamb of God first gained prominence around the beginning of the Internet era, Blythe said, so it was grandfathered in and did not have to deal with the things a lot of new bands do.

The vocalist said he also thinks there is a misconception that the Internet alone or a strong social-media presence will land a musician a record deal or make them popular.

“If you want to get lucky, play the lottery, because your odds are just about as good,” he said.

One thing Blythe does appreciate in music is honesty.

“You can’t fake the funk,” he said. “I don’t like posturing in music unless the band is, of course, a theatrical band like Gwar or something.”

Some acts are not open to their own nature or are too busy trying to emulate what they’ve heard elsewhere, he said. Blythe has always been open, but he does not necessarily expect that from every other band.

“I think as an artist, it is important to be true to yourself more so than to be completely open,” he said. “Openness can lead to too many different opinions about what you should do. I think the artist should be open to their own creative impulses.”

That honesty and sense of self is likely rooted in his creative past. Blythe claims a writer’s soul. He said he started writing when he was a kid and considers himself a far better writer than a musician. Last year, he published his first book, Dark Days: A Memoir, which is perhaps most notable for recounting the 2010 Czech Republic incident in which a 19-year-old fan sustained a head injury and later died as well as Blythe’s five-week stint in prison.

Blythe said he plans to continue writing books, even after he is too feeble to continue his stage act.

“You’re not going to see an old Randy hopping around, singing ‘Now You’ve Got Something to Die For’ or some crap like that,” he said. “That would be ludicrous and embarrassing. You know? I’m old enough as it is; it hurts as it is.”

Print headline: God’s will, Metal band Lamb of God has established its place as a constant in the ever-evolving music industry.