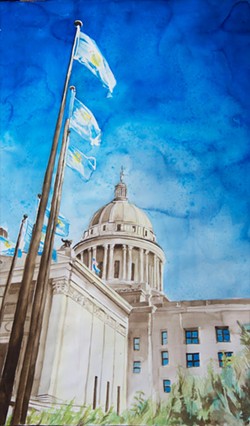 People visit the Oklahoma State Capitol for a variety of reasons, almost none of which are related to appreciating art. Alyson Atchison curates the Capitol’s three galleries, and she is attempting to make the building more beautiful and a place in which people who don’t often encounter art might be moved to pause and appreciate the work of Oklahoma artists.

The three galleries feature different media, but all are selected by a committee that is serious about featuring art from a geographically diverse selection of portfolios. Currently, the three exhibits are from Frederick, Norman and Tulsa artists. Each artist’s work is displayed for 60 days, and Atchison curates about 18 shows per year.

Tulsa artist Tommy Lee Ball’s large-scale watercolors are featured in the East Gallery through June 28. The exhibit is titled Urban Watercolor, and the pieces are drawn from Ball’s excursions in Oklahoma City and Tulsa as well as aerial views of the cities’ neighborhoods.

“Tommy Lee Ball is doing some incredibly unique things with watercolors,” Atchison said. “First of all, these are the largest watercolors I have ever worked with. He is also doing highly detailed urban scenes and cityscapes, which is a big departure from the typical watercolor landscapes that are more common in that medium.”

The East Gallery is specifically fitted to work with large-scale pieces, so there are only 17 panels to work with. Ball’s work currently fills all the panels, but he did not just submit watercolors; he built frames that allow the paintings to stand out from the wall. Atchison said the effect allows the pieces to actually glow with vibrant colors.

“I tend to think about people who are coming to the Capitol and the kind of works that would get their attention, that would work as an introduction to art,” Atchison said. “Tommy’s work invites people to stop and look.”

Ball grew up in Sapulpa, and he spent much of his youth exploring Tulsa’s neighborhoods, including downtown, from the perspective of his bicycle seat. The ability to experience those spaces without the separation of traveling in an automobile gave Ball an eye for small details that drivers would likely miss. His work as a stonemason, which he does in addition to art, also gives him an eye for proportion and symmetry.

Watercolors give color a chance to glow, and Ball is remarkably adept at creating luminosity on his canvas. In one of his pieces, “Williams/BOk Walking Bridge,” the viewer appears to be approaching the building from the shadow of night, and Ball uses the colors to create a corridor of illumination that pulls the viewer to the safety and warmth of the light. Many of Ball’s pieces use light and shadow to create depth and warmth, and the scenes appear vibrant, detailed and alive with emotion and energy.

The Oklahoma City pieces, including the State Capitol and Midtown, were the result of trips Ball made to the metro to expand his portfolio. His skill is obvious when the viewer realizes that Ball’s buildings and landmarks are easily recognizable to residents of the cities he paints.