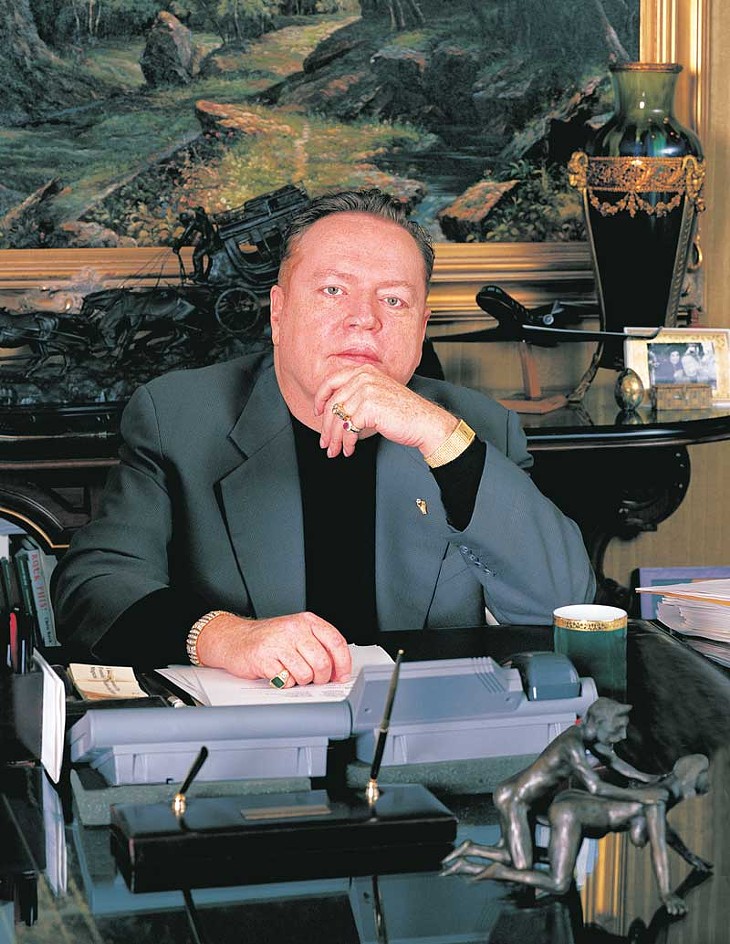 Larry Flynt, with his raspy, bullfrog voice, has always had his work cut out for him. Villified in the media, he continually has to overcome the image of him as a lecherous smut-peddler.

Flynt is the name and legend behind Larry Flynt Publications (LFP), the increasingly diverse business that got its start publishing Hustler magazine. Geared toward working- class men, it is the raunchier, riskier Playboy. The magazine has pushed the boundaries of not only good taste but legality. The multi-million-dollar publishing house also produces several other magazines, including Barely Legal, which is devoted exclusively to pictorials of women ages 18-23. LFP produces online gambling games and adult videos, as well.

In 1998, LFP branched out further into the retail business with a chain of upscale adult boutiques in West Hollywood. On June 12th, Hustler Hollywood quietly opened its 13th location right here in Oklahoma City, at 500 S. Meridian Ave. With the slogan, “Relax — it’s just sex!” they hope to bring a new kind of shopping experience to the reddest of the red states.

On the phone in the early morning from Los Angeles, Flynt sounds particularly hoarse and tired. The expectation is that he will say something raunchy or perverse — this is a man who once put a woman being fed into a meat grinder on the cover of his magazine. His courtly manners are a surprise.

“Everyone thinks I am this seedy old man, grinding out pornography in my basement. I have a huge business, an empire,” he said.

He is philosophical about his contribution to the discussion of morality and free speech in America, and about the topic of sex in general. His magazine opens a dialogue about sex and sexuality, even if the format is not for everyone.

“In Europe, [sexuality] is accepted for what it is, a great gift, and other than the desire for survival, the strongest desire we have,” he said.

He is more than willing to talk about the history of pornography and the cultural norms that helped shape American’s attitudes toward it. Flynt knows his history, and he also reads nonfiction almost exclusively. Over the years, he has become more comfortable with his role as a champion of freedom of speech.

His fight for free speech and freedom of the press is legendary — he was shot leaving a courthouse in Georgia in 1978 after yet another obscenity trial. The shooting left him paralyzed from the waist down. His distinctive speech is the result of a stroke caused by an overdose of pain medicine. When he speaks, he is not difficult to understand, but it does sound painful at times.

“I feel like Americans have a knee-jerk reaction to sex that’s very unhealthy,” he said.

He has never wavered in his commitment to publish what he wants — the law continuously comes down in his favor.

“Obscenity is a legal term that [the courts] have used to prosecute pornography. They haven’t been very successful,” he says. “The American people really feel that they have the right to read or view whatever they want in the privacy of their own homes, and when someone tries to tell them what they can or cannot view, it’s insulting their intelligence.”

As for whether Flynt’s publications push the boundaries of good taste, that’s not something that concerns him, but it has certainly contributed to his vilification in the media.

“I always felt, even at the very beginning, that free speech is important only when it’s offensive,” he said.

Out in the boundaries of what is and is not acceptable is where the battle is fought and, in Flynt’s case, won. While the perception might be that he gleefully condones anything and everything under the First Amendment, there are things that cross boundaries for him.

“I think war is obscene,” he said. “You take a newspaper and you publish a picture of a mutilated body, you might even win a Pulitzer Prize for that. You publish a photo of people making love, you’ll probably go to jail. What does that say about our society?”

He finds himself getting more philosophical as he grows older, but he has always focused on the big picture.

“My role models have always been great historical figures — Lincoln, Churchill and people that I admired and got to know personally. I was very fond of the late Gore Vidal,” he said.

He contemplates his role in the scheme of things and what his legacy will be. For a publisher of dirty magazines, he has made quite a contribution to freedom of speech and the press.

“I would like to think that I have fought to expand the parameters of free speech in a positive way,” Flynt said.

Print headline: American Hustler: Larry Flynt has made a career (and a lot of money) out of defending the First Amendment.