In his podcasting, standup, television shows and hip-hop, Hannibal Buress takes comedy to the point of stress fracture. 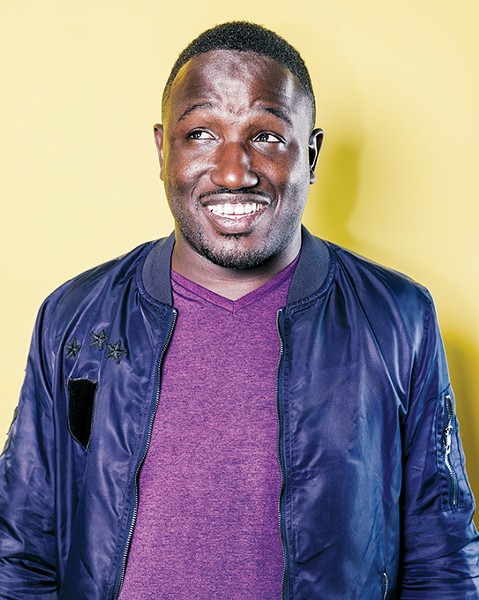 To preview his Sept. 12 appearance at Tower Theatre, we conducted a phone interview with Hannibal Buress — we think.  In addition to his work on 30 Rock, Broad City and The Eric Andre Show, the stand-up comic, actor and podcast host is known for playful goofs such as hiring an impersonator to take his place in interviews at the premiere for Spiderman: Homecoming, in which he played the role of Coach Wilson. (Well that and his 2014 joke that went viral and brought widespread awareness to rape accusations against Bill Cosby, but Buress isn’t talking about that anymore.) Attempts to verify the comic’s identity proved unsatisfactory.

“How can you check, though?” Buress replied when asked if he was who he said he was. “It could be an impression, voice-changing software, but if, especially just on the phone, if they get the job done, they get the job done. If you get the quotes you need for your story, and it works to promote the show and you get something that works for a headline, then what’s the harm?”

Buress, or someone who sounded just like him, said the last time he was in Oklahoma City was in 2016 when he saw the Thunder lose game six of the NBA Western Conference Finals to the Golden State Warriors.

“The city was really sad afterwards. The nightlife was terrible,” he said. “You’d have thought that was game seven the way the city felt. It was really depressing man; shit sucked.”

Though Buress didn’t do any standup on that trip, he said he would have been happy to.

“I think it would have been an easy gig because people would have wanted a laugh,” Buress said. “People would probably be like, ‘Oof. We need somebody to help us process this, because we’re absolutely going to lose in game seven, and we don’t know how to articulate it yet.’”

While emceeing an NBA 2K tournament last year that pitted gamers against pro athletes, Buress had a question for Thunder-turned Golden State Warrior Kevin Durant, his co-star in a popular Nike commercial in which Buress gives him the nickname “Kevin.”

“Durant,” Buress said to the basketball player mid-video game, “if you all lose this game, will you join their team next season?”

“I couldn’t not make that quick joke,” he recalled.

After the San Antonio Spurs defeated the Miami Heat in the 2014 NBA Finals, Buress conducted interviews for ESPN in Miami while wearing a Spurs jersey. Buress said he just thinks that kind of thing is funny and includes it in standup shows when he can.

“You want to create a unique energy at the show,” Buress said. “Sometimes a kind of hostility is what you want. You want people to be a bit unsettled and do it in a fun way.”

On his podcast Handsome Rambler Buress disrupts the standard interview format by having DJ Tony Trimm remix snippets of dialogue into beats for Buress and his guests to freestyle or play a Theremin over. Buress — who also rapped as a feature on Quelle Chris and Jean Grae’s album Everything’s Fine, released earlier this year — said he has been planning on releasing a hip-hop album of his own for a long time.

"Sometimes a kind of hostility is what you want. You want people to be a bit unsettled and do it in a fun way." —Hannibal Buress click to tweet

“I’ve been talking about that for years, and the answer is yes,” Buress said. “I don’t know when. To really do it, I think I have to focus up and put myself in a certain mind-state and really work on it for a couple of weeks. But it’s definitely something I want to do. Even before I did any stand-up comedy, I would hang out with my friends. I remember my first friend that had a beat machine at his crib, and he would just make some beats and we would freestyle over his beats and make tapes and make goofy songs, so that’s always been my interest pre-standup. It’s fun, man, to be able to mix it up, and it’s another way to execute ideas because you can just kind of have a goofy concept.”

As a creative performer, Buress said he is always looking for different ways to use ideas.

“There’s a lot of jokes that you try once or twice, and because of it not getting a good initial reaction or just plain poor organizational and record-keeping skills, you don’t try the joke again,” Buress said. “I do write a lot of stuff down, and so what’s fun sometimes is to go look at a notebook from three or four years ago and see what my state of mind was then and see some ideas that I didn’t do anything with or I tried once and then it didn’t work but just with more experience and more perspective being able to figure out how to fit it into the show or even the podcast or it could be in a script down the line.”

If they’re good enough and well-executed, the ideas can come from anywhere. While Buress said “a Holocaust joke, or any sensitive subject” can be appropriate fodder for comedy “if it’s done right and it’s nuanced and it’s funny,” bad standup will always be offensive.

“It’s not even subject matter; a lot of times, it’s just, Are you skilled enough, is the crowd into it, are you that person that has the charisma and likeability, and is the joke good enough?” he said. “Because somebody could do a joke about going to the grocery store, and if they’re terrible, that joke would be upsetting.”