Jewel Box Theatre’s The Foreigner earns the laughter with both words and actions. 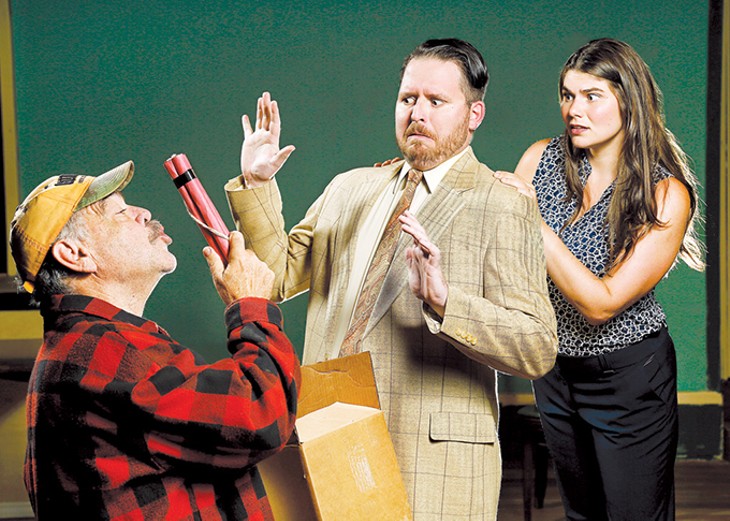 There are comedies, and then there is the “laugh fest,” a distinctive sub-genre that leaves the audience in stitches from laughter. For Jewel Box Theatre director Chuck Tweed, The Foreigner definitely falls into the latter category.

Over the course of its two acts set vaguely in the “recent past,” The Foreigner follows Charlie Baker and Staff Sergeant Froggy LeSueur as they travel to a hunting lodge in Georgia to teach a demolition class. Painfully shy Charlie — an Englishman — finds an easy exit from anxiety-inducing conversations when his friend claims that he doesn’t speak English.

“While he’s sitting there, he keeps hearing things that he should not have heard,” Tweed said. “He decides to go along with the charade and pretend he doesn’t know any English.”

An eclectic medley of secondary characters rounds out the cast and maximizes the zany hijinks that result from Charlie’s selective speaking: Betty Meeks, the lodge owner; an ex-debutante and her brother; and a pair of local Georgians.

“Charlie is the crux of it all,” Tweed said. “He’s causing everything to happen once he arrives.”

To keep up the act, Charlie even creates his own language.

“No one in the room has any idea what he’s talking about, but by the way his actions move, they can tell what he’s saying,” said Tweed.

For actor Barrett Davidson, who plays Charlie, the role poses its own uniquely enjoyable challenges. For much of the show, Charlie does not speak, taking the role of an observer. However, even this passivity is itself an illusion, a role within a role.

“The foreigner Charlie is acting like he doesn’t know,” said Davidson, who had discussions with the cast and crew about how to most effectively convey Charlie’s knowledge — or pretended lack thereof.

Such questions — when to glance at other actors and when to look away in disinterest — imbue the comedy with a layer of complex dramatic irony that propels the humor even as deeper themes of foreign identity and secrecy emerge.

“It sounds easy to just sit there and stare off, but it’s the first role like this that I’ve had,” said Davidson, who has both worked with Tweed on other shows and worked on a production of The Foreigner in California.

After 25 years of acting, Davidson said he has learned to trust the process and Tweed’s vision.

Although Tweed has directed The Foreigner three previous times, the last time he did so at the Jewel Box was in 2004. After 14 years, the perennial audience favorite will return to familiar faces and newcomers to the show, whose appeal extends far and wide.

“I have a friend who only directs dramas — won’t direct anything else,” said Jewel Box stage manager Jan Garrett. “But she said if she had an opportunity to direct The Foreigner, she would do it.”

That Garrett, Tweed and Davidson have all worked on iterations of The Foreigner speaks to both the show’s enduring appeal and their excitement at putting it on again.

“Every year that we’ve done it, our season ticket people get to vote for the best play, and this one has won three times,” said Tweed, who wanted to kick off this fall’s season with the show.

Part of the play’s joy, said Tweed, is all the humor that actors and directors can find that’s not on the page, from outlandish bits to dramatic gestures. Tweed said one word or one gesture can elevate the comic meaning of a sentence and it’s rewarding to watch different actors bring the show to life.

Because of The Foreigner’s delicate balance of dramatic irony, the show also requires a precise understanding of comic timing. Cast rehearsals have already made the actors laugh — always a good omen.

It’s sometimes said that comedy is harder than drama, and comedy performed “in the round,” as at the Jewel Box, requires even more spatial awareness, creating a sense of heightened and immersive realism for actors and audiences alike.

“It’s like real life,” said Tweed. “We don’t always stand together and face the front. Whatever show we’re doing at the Jewel Box, you are there. This is a lodge in Georgia; you’re sitting in the lodge. … That’s what I love about the round; there are people all around, and they are in whatever’s on stage.”

Unlike traditional proscenium theater, in which actors can sit and talk for long periods of time, working in the round also requires frequent movement to switch up audience members’ views and ensure a lively, dynamic performance.

“I’ve done a lot of shows here, and it’s always one of my favorite experiences,” said Davidson. “I love it because it frees you up as an actor.”

With its examination of what it means to be a “foreigner” — confronting mistrust, fear and prejudice — Davidson said Shue’s show is still relevant today. Charlie’s arc moves from near-silence to driving the action, transforming the character and others around him.

“He comes out of his shell during the show, so at the end, he’s the brightest bulb in the package,” said Tweed.