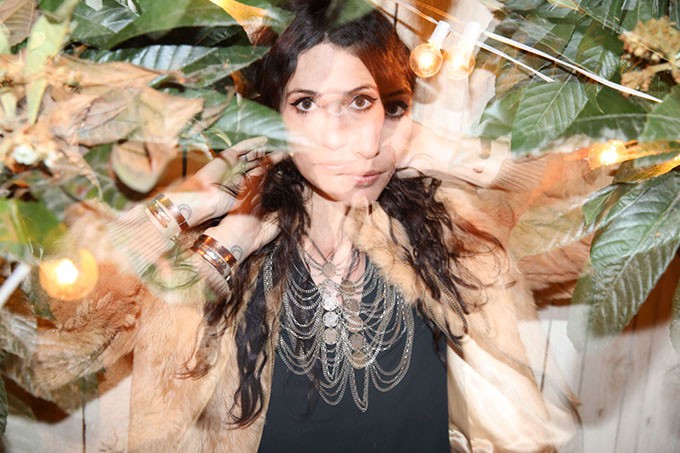 While helping a group of grade-schoolers through the songwriting process in a children’s class at Tulsa’s Woody Guthrie Center, Lauren Barth said her students were conflicted about what the theme for their tune should be. They were torn between writing about doughnuts or about God.

They did a little of both.

“One kid was like, ‘Well, we have to write about God. God makes all the food anyway,’” Barth said during a recent Oklahoma Gazette interview.

If the California-born singer-songwriter was not yet accustomed to life in the Bible Belt, working with children as a volunteer instructor for the Guthrie Center has helped get her there.

Barth is a relatively recent transplant into the Tulsa area, but her folk sound and spirit could help her pass as a lifetime Okie.

Her debut album Forager, produced by talented Tulsa songwriter and multi-instrumentalist Jesse Aycock, is set for a Friday release.

Barth — a throwback to Bonnie Raitt and other free-spirited artists of radio’s heyday — generally enjoys working with children but does not think she is cut out to be a teacher. But stepping outside of her comfort zone has been a repeated theme for her recently.

“It gets me out of my own head and gets me into kid brain,” she said, “which is a really fun and inspiring place.”

Barth packed her car and prepared for a long drive across Interstate 40. She said goodbye to her friends and family in Los Angeles and told them that she was going to take a job in Nashville, Tennessee.

“That wasn’t even true at all,” she said. “I had gone on tour with an artist from Nashville a few months before and I was like, ‘Yeah, I got hired again,’ which was not true.”

Barth wanted a journey, not a job. She had friends in Tulsa, Dallas and Nashville, and hoped to make long stops in all three cities. She has long chased the dream of becoming a career musician.

Despite her white lie, her end goal was to eventually settle in Nashville. But nothing seemed to stick. She left Tennessee and circled back to Tulsa, a place she said she truly felt at home.

“The music community is really strong and welcoming, and I just felt like this was a place where I could go and do some good work,” she said of Tulsa. “And it has been.”

The cost of living, especially compared to what she was used to in California, is really what helped sell Barth on her new state. Life as a starving artist balancing day jobs is not easy anywhere, but in Oklahoma, it at least seems doable.

“I feel like Oklahoma is one of the last frontiers for a true Bohemian artist lifestyle,” she said.

The Forager album takes its name from its title track, a song Barth wrote as a nod to her wandering spirit.

“I don’t know if I believe in this particularly,” she said, “but if I did believe in past lives or karma cycles and being reincarnated as something, my idea was that if I wasn’t a musician or all these things I identify with, in a different era of time, I would have been some kind of a forager.”

Barth described the overall tone of her album as moody and dark, but hopeful. The instrumentation is sparse, but warm, with an analog feel to the recording.

Though Barth began the album process recording in a studio in Oakland, California, heading out to the middle of the country with Aycock to finish the project at Little Rock, Arkansas, studio Fellowship Hall Sound inspired its finish. The songwriter was taken with the vegetation and landscape of the open plains — which is part of the reason foraging was on her mind. She wanted her album to sound like a slow, rolling thunderstorm over the prairie.

“Changing scenery, it was like all these new things were coming out,” she said. “It was really cool.”

Barth wrapped up work on her debut on the Tulsa-based nonprofit, independent label Horton Records in January. She has since been counting the days until her work can finally reach the public.

She has had many false starts and missed attempts along the journey to her debut album — so many that she was to the point of believing she would never actually release an album.

Forager is full of themes like change and finding what one wants in life. Barth has dreamed of the musician’s lifestyle since she was just a little girl. With a leap of faith, she’s now more than well on her way.

“That’s been a major theme for me the past couple of years,” she said. “shedding your old ideas of who you are and cutting straight to, ‘Who is the person that I want to be, and what is standing in my way of being that person?’”

Print headline: Treasure hunt, Lauren Barth’s search for a new home led her to Oklahoma and a debut album.