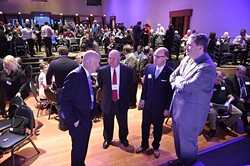 Following state leaders declaring revenue failure in December and a $177 million midyear budget trim, lawmakers faced a grim situation this week when returning to the Capitol.

“I see this budget shortfall as an opportunity to be able to fix things — be able to clean our house, frankly — and to get things in order so that we can pay for things we need to pay for,” Fallin told Tulsa World.

Blatt said a drop in oil prices only partially contributed to the budget crisis.

Shrinking monthly tax collections came on the heels of several cuts to the state’s personal income tax, which resulted in a $1.022 billion loss over the course of more than a decade, according to The Institute on Taxation and Economic Policy. 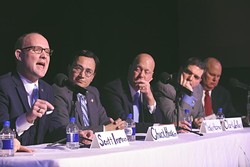 Waiting for tax collections to improve isn’t the answer, nor is doubling down on cuts and relying on one-time revenues, Blatt said during Oklahoma Policy Institute’s Jan. 28 State Budget Summit at Will Rogers Theatre & Event Center.

“We do have a chance to look at how we develop our budgets and try to put into place some more long-term planning and foresight into the process,” Blatt said.

The nonprofit group supports a repeal of the most recent income tax cut, which dropped to 5 percent Jan. 1. The repeal is one of “five reasonable solutions” introduced during the summit. Other solutions are adopting combined corporate reporting, ending the state’s double deduction, enacting a tax on online sales and accepting federal funds for health care — Medicaid expansion.

All options generate recurring revenues into Oklahoma’s coffers, according to Oklahoma Policy Institute.

“We are stuck in a place where a train wreck is coming,” Hepner said. “All the levers we could use to stop it aren’t available to us. So the crash, in the terms of the state budget, is coming in the next few months.”

House Minority Leader Inman described a perfect storm as he cited causes of the budget shortfall. He blamed approval of a low horizontal drilling tax, a high number of tax credits and personal income tax cuts.

“We are here because you have a group of elected officials who would rather govern by political philosophy than by political reality,” said Inman, D-Del City.

It’s difficult to predict the budget outcome during a session with a fiscal crisis of historic proportions. However, lawmakers can continue to work for solutions thanks to a handful of proposed legislation measures.

Under the proposal, lawmakers craft the budget each legislative session but push policy issues to every other year. States such as Arkansas, Louisiana and New Mexico limit sessions to every other year. The Senate leader said the proposal allows lawmakers “to take a closer look at our spending” and bring transparency to the process. Last session, the resolution passed the Senate. It remains eligible for the House to review this session.

Under SB 1073, the income-tax rate reduction is void after declaration of a revenue failure during the same fiscal year. Additionally, the bill addresses requirements for triggering a further rate cut.

The finance committee will review the legislation.

Authored by Sen. David Holt, R-Oklahoma City, SJR 44 called on voters to decide altering the number state leaders look to when setting the cap on the state’s Rainy Day Fund.

Holt calls for the Rainy Day Fund to be measured at 15 percent of the total state budget.

Currently, the fund is measured on the general revenue fund certification at 15 percent. Under the current practice, lawmakers determine the cap on appropriated funds only. That means “off-the-top” money — revenue not appropriated by the Legislature — is not included in the measurement.

Last session, the general revenue fund certification was under $5.6 billion, less than a quarter of the amount spent by the state when including off-the-top money.

The resolution was referred to the Senate Rules Committee. If passed, voters would consider the measure on the November ballot.