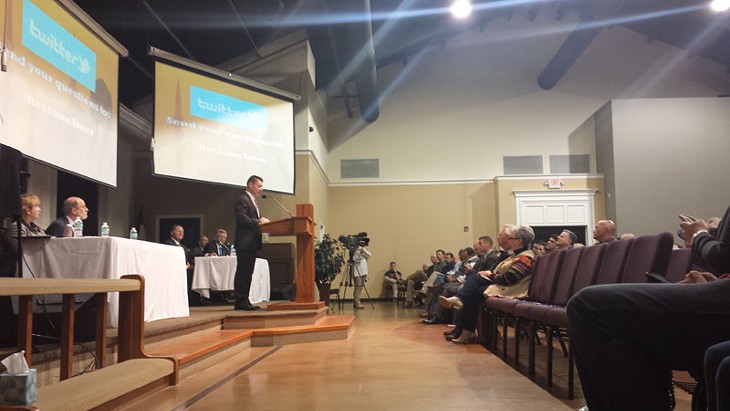 It started with the Pledge of Allegiance and a prayer thanking God for America’s freedom of religion. It was followed by two hours of lectures on the evils of Islam, an ancient religion no one on stage had ever practiced or studied in an academic setting.

A crowd of nearly 300 gathered at Fairview Baptist Church Monday evening for an event challenging the notion that Islam was a religion of peace and warning those gathered to fight back before it was too late.

“Academics, politicians and members of the media tell us how peaceful Islam is but 1,400 years of Islamic history defies that statement,” said Paul Blair, a burly yet cleancut figure that began Monday’s forum with his interpretation of the history of Mohammed.

Blair, the former Oklahoma State University offensive tackle, is pastor of Fairview Baptist Church in Edmond and is the chairman of Reclaiming America for Christ, an organization that believes Christianity is under attack.

In previous sermons and speeches by Blair there is often celebration of America’s religious liberties and the freedom to practice one’s faith without persecution. That may come across as ironic given Blair’s desire to purge Islam from the American culture, but for him Islam is not so much a religion, but rather a political philosophy that seeks global domination.

“It is the nature of Islam to dominate, not to be dominated, to impose its law on all nations and to extend its power to the entire planet,” Blair told the crowd, quoting from the words of Hassan al-Banna, the founder of the Muslim Brotherhood. 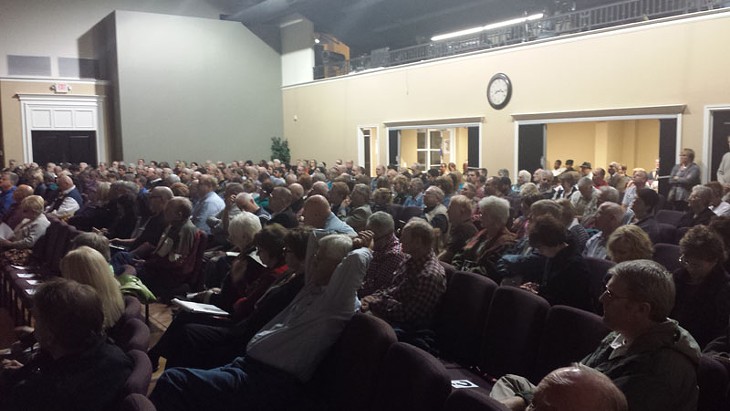 For those who would counter by saying extremist groups like the Muslim Brotherhood do not speak for the majority of Muslims and that there are numerous cases of practicing Muslims denouncing this view, Blair’s response is that Muslims lie and are told to do so by the Quran.

Blair offered a history lesson of Muhammad, believed by Muslims to be the prophet of God, that he said showed a peaceful prophet at first, but then turning violent when he gained political power.

“When Muhammad had the [political] power the sermon was replaced with the sword and that is still the model,” Blair said, adding that America is close to seeing that type of shift from peace to violence today.

Blair has been no stranger to speaking out for conservative Christian beliefs. In 2011 he addressed the Oklahoma City council and urged them not to include gay, lesbians and transgendered persons in the city’s non-discrimination clause.

“Why are we creating a special class of protection for someone’s behavior,” Blair said. “All studies say that homosexuality is largely a learned behavior.”

Joining Blair on stage Monday night was Frank Gaffney, a conservative columnist for the Washington Times who has questioned President Barack Obama’s U.S. citizenship and promotes the idea that he is connected with Muslim extremist.

On Tuesday, Gaffney testified before Oklahoma lawmakers on the topic of preventing attacks to electrical systems. Tuesday’s interim study was led by Rep. John Bennett, a lawmaker who has gained attention in recent weeks for his anti-Islamic remarks.

Bennett was at Monday’s event and told the crowd he and other lawmakers had formed a counter terrorism caucus in Oklahoma and urged those in attendance to contact his group with any tips or suspicions.

“We want to hear from you and we want to know what you are seeing,” Bennett said. “We will send that information to the appropriate law enforcement agencies.”

Clare Lopez, a former Central Intelligence Agency official, also presented on the dangers Islam poses to women. Lopez, who has written previously that she believes Obama has attempted to help Muslim terrorists, told the audience that Islam is oppressive to women and condones marital rape.

At the end of the event, the audience was urged to spread the message of Islam’s danger to their neighbors, pastors, family and friends. The audience was also invited to purchase a DVD on their way out.

Blair was asked how long America has until Islam takes over, a question he admitted he didn’t have a clear answer for.

“I have no idea,” Blair said. “But we are quickly headed in that direction.”