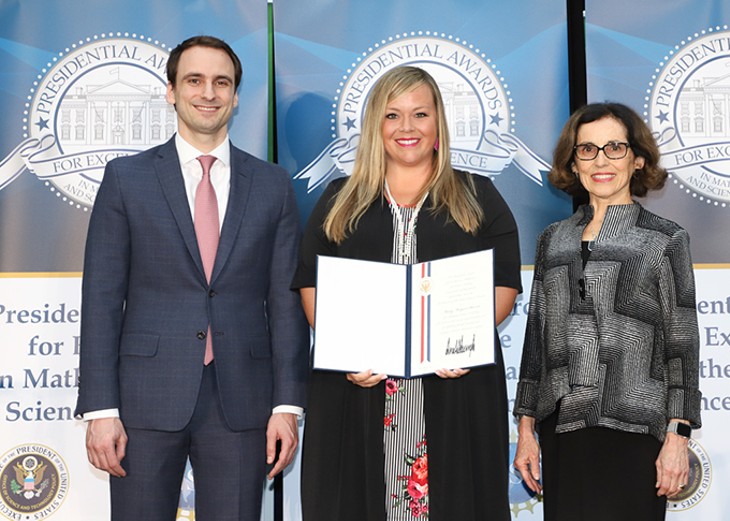 For eleven years, Norman-based second-grade teacher Macey Stewart has taught mathematics, honing her skills and pedagogy to foster a love of learning in elementary-age students.

Earlier this summer, Stewart received national recognition for her hard work when she, along with Claremore teacher Michelle Rahn, was awarded a Presidential Award for Excellence in Mathematics and Science Teaching. Both instructors received $10,000 from the National Science Foundation in accompaniment of the award.

Stewart, who earned bachelor’s and master’s degrees from the University of Oklahoma and has taught at Norman Public Schools’ Washington Elementary School for over a decade, went through a circuitous nomination process before earning her recognition this year.

After being nominated by her mother — a fellow instructor who won the same award in 2008 — back in 2014, Stewart became a state finalist. However, according to Stewart, there was a delay for deciding and awarding recipients.

“On even-numbered years, elementary teachers can apply, and by 2016, they had not announced the 2014 winners, and so they encouraged me to re-apply,” said Stewart, who revised some of her submission materials, including an essay, before re-submitting.

Stewart did not win 2014 recognition, but her 2016 application garnered her the award.

“I was very excited,” Stewart said. “I felt very validated that I was using best practices with teaching and just that I was doing the right thing.”

Over her decade of classroom instruction, Stewart has implemented her teaching philosophy among some of Oklahoma’s youngest elementary students.

“There’s so much that second-graders are capable of,” Stewart said. “They have that natural curiosity, and they want to learn more. I just really try to guide them into finding their own answers by giving resources I know are safe, that they can learn through.”

Stewart’s teaching philosophy rests firmly on the conviction that students can take charge of their own learning and that such a skill is critical to impart at a young age.

“If they don’t have the number sense to use numbers correctly in their head, then they will struggle with math from that time on. I spend a lot of time just helping them grasp number sense and how to manipulate numbers in their head,” said Stewart, whose approach reflects a larger trend throughout Norman Public Schools toward guided inquiry, a learning approach that emphasizes students’ ability to learn in STEM fields through increased independence.

In addition to fostering these approaches in her own classroom, Stewart has also mentored other teachers and student teachers. While attending the awards reception in Washington, D.C. earlier this summer, Stewart was able to participate in a discussion about a five-year strategic STEM plan with national and state leaders and policymakers and voice her opinions on what would make classroom implementation more effective.

Stewart’s win earned her both national and statewide recognition for her teaching practices.

“It is very exciting to be able to showcase to the country the outstanding work of an elementary teacher in STEM education, particularly in mathematics and science academic standards, and the very strong ability of Macey to effectively teach that high level of standard to her students in second grade,” said State Superintendent of Public Instruction Joy Hofmeister.

In a year that has sparked conversations about the vital role that teachers play throughout the country, Hofmeister said there are multiple statewide initiatives and grants surrounding STEM education that aim to help close the gap between Oklahoma’s high interest level in science and mathematics and its weak academic readiness outcomes.

A revamped set of academic standards moved the state from a 47th-place ranking nationwide to 17th, Hofmeister said.

“We are working to build a framework of support for educators to be able to teach the way Macey has been recognized nationally,” Hofmeister said. “It’s very, very important that we have our students in early elementary gaining a strong foundation in mathematics and science instruction and learning so that they can hit the ground running.”

Hofmeister said Stewart models the passion, interest and expertise that is vital to excellent STEM instruction. Regarding programs of excellence, Hofmeister said there is a rubric available for school districts to identify where growth exists in their schools and where it is needed and also where the community can help support initiatives.

Stewart said she is still undecided about the specifics of how she will spend her $10,000 award, but some of the money will be used to further classroom technology.

“The kids are able to do a lot more with their own learning. They can create projects and do research online when they have more devices. That plays a big part in the engineering piece of STEM, as well,” Stewart said, referencing how early exposure to coding technology can help set up students for success in later years.

Alongside spending for technology in the classroom, Stewart plans to spend a portion of her award funds on professional development.

“I think that’s important — for me to be a lifelong learner when I expect my students to be, also,” Stewart said.

As Oklahoma works to improve funding and support for its teachers, luminary instructors such as Stewart can furnish a vision of what it means to teach well at the level of the classroom, the state and the nation.