Oozie Mediterranean provides Lebanese flavors from a small cafe in an office building. 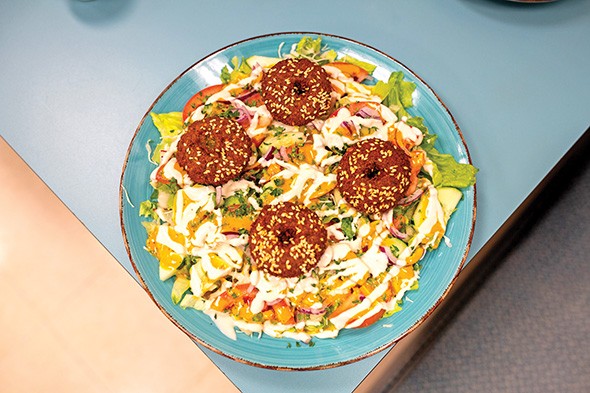 After growing up in Lebanon, Charlie Khalaf’s schooling and career in marketing has taken him to Dubai, New York, Tampa and eventually Tulsa. At each stop, he searched in vain for a restaurant that could replicate the flavors he grew up eating.

He had to move to Oklahoma City to take matters into his own hands with the help of his mother Mona and wife Lamise. Oozie Mediterranean Restaurant opened in an office building at 1211 N. Shartel Ave. in August.

“I wanted to serve Mediterranean and Lebanese food because I lived in New York for six years for my education, and I’ve been to too many restaurants in New York that aren’t authentic,” Khalaf said. “I lived in Tampa, and there are some Lebanese restaurants, and it’s the same story; Tulsa same thing.”

After looking for a location in Tulsa for a few years, Khalaf responded to a Craigslist ad for the restaurant space located on the bottom floor of an office building that primarily is home to medical offices.

The restaurant opens at 8 a.m. Monday-Friday and starts the day by offering American-style breakfast and offers a pair of hamburgers for customers who might not be in the mood to try Lebanese cuisine.

“The only negative thing [about the location] is that we have to close by 5 p.m. and for the weekend, but I can still do catering orders [after hours and the weekend,]” Khalaf said. “This is a small dream, and we’re doing this with love. I have big plans, but we have to start from somewhere. It’s a good spot and located in a good area. It’s been going better than I expected for the beginning.”

“This is a small dream, and
we’re doing this with love.”
— Charlie Khalaf tweet this

He started dreaming about a restaurant in 2015, but his mother was still living overseas in Beirut. After his sister received her degree in petroleum engineering, Mona was able to join him in the States, along with his wife Lamise.

He works the front of the restaurant while Mona and Lamise cook food and prepare various dishes and marinades, like its chicken and beef shawarma. They also carefully chop tomatoes, parsley and red onion and squeeze lemons for tabbouleh, which is one of the main dishes Khalaf felt he could never find accurately reproduced in the States.

“Big restaurants in Beirut, looks like our version,” Khalaf said. “People have said it’s different than what they’re used to because restaurants in the U.S. don’t use as many tomatoes and use too much grain [bulgar], and they hardly use red onion at all.”

The name of the restaurant comes from a popular but lesser-known Lebanese dish in the States. Oozie, which is also popular in Jordan, is similar to hashwa (also spelled hashweh) which is rice cooked with ground beef, nutmeg, cinnamon, allspice and cardamom, but with a few extra ingredients.

“I didn’t want to be lame and call it Hummus or Tabbouleh Restaurant,” Khalaf said. “I just wanted to be easy-going like Oozie because it’s easy to remember and catchy.”

While the eponymous oozie is not on the menu, the restaurant dishes out plenty of hashwa, which is available as a daily special with an entrée portion, but it’s also served along with hummus, salad and garlic paste on the chicken and beef shawarma plates. 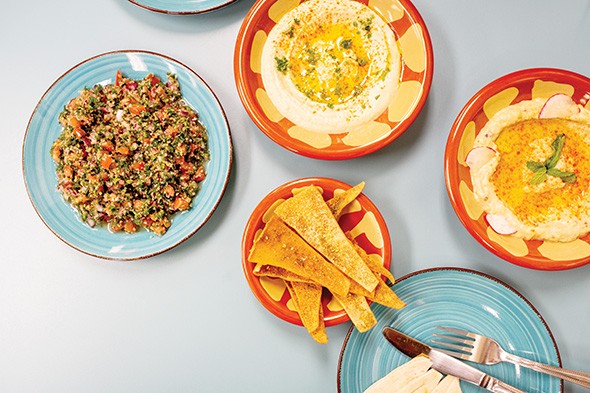 Other specials include eggplant stuffed with ground beef, onion, tomatoes and pine nuts cooked in a tomato sauce served with vermicelli rice and pita bread, which is baked at John’s Pita Bakery in Wichita. Mujaddara is a puree of lentils with rice topped with caramelized onions and served with a salad that includes a housemade honey mustard dressing.

During the winter, Oozie plans to offer a pair of stews: fasolia, which is beef cooked in a tomato sauce with lima beans, onions and cilantro, and bemye, a stew of beef and okra in tomato sauce.

For appetizers, it also offers meat and vegetarian stuffed cabbage rolls and kibbeh, which is fried cracked wheat stuffed with ground beef, onions, pine nuts and spices. Falafel is rounded into balls, gets poked in the middle to promote an even cook throughout the frying process and served with salad or as a wrap.

Hummus is drizzled with olive oil, smoked paprika and sumac before it’s served. Eggplant to make baba ghanoush is grilled, which adds a depth of smokiness to the dish before it’s mashed with tahini, garlic and lemon.

“We want to revive and bring with love an ancient and original Mediterranean healthy food to the public who hadn’t properly experienced it in Oklahoma,” Khalaf said on Oozie’s website. “Oklahoma figuratively and literally is the heartland of the United States. It’s the bastion of diversity and the American dream. We humbly present a little dream of ours to this great state. Our food doesn’t only represent the rich culture of Lebanon, but also imbibes the enduring American belief of perfection and quality.”