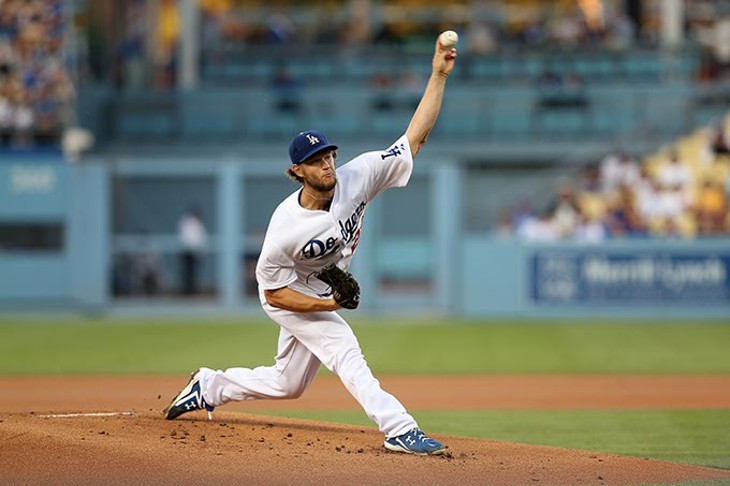 After one of the best Los Angeles Dodgers seasons in recent history, pitcher Clayton Kershaw is in Oklahoma City this week to pick up his latest piece of hardware, the 2014 Warren Spahn Award.

Kershaw has won the award for the second consecutive year and the third time in four years. He also won in 2011 and 2013.

“I’m humbled to be recognized by the Bricktown Rotary Club again this year. The prestige of this award isn’t lost on me,” he said. “Warren Spahn was a great pitcher with a legendary career. To be recognized in his honor is pretty special.”

Pitching dominated baseball this year, and Kershaw was one of the best. He won both the National League Cy Young and Most Valuable Player awards (just the 11th player in MLB history to accomplish that), amassing a 21-3 record with 239 strikeouts. His 1.77 Earned Run Average was the lowest in the Majors since 2000, and he won his fourth straight ERA title, the first pitcher ever to reach that milestone. Kershaw also threw his first no-hitter on June 18 against the Colorado Rockies.

Kershaw has been one of the top pitchers in baseball since his MLB debut in 2008. The 26-year-old from Dallas has won three Cy Young Awards, the pitching Triple Crown in 2011 and is a four-time NL all-star.

In 2011, Kershaw and his wife, Ellen, founded Kershaw’s Challenge, which seeks to help children in the United States and Africa. The organization provides a home to orphans living with HIV/AIDS in Zambia, and in 2012, it expanded to serve at-risk youth in Los Angeles and Dallas.

“As impressive as Clayton Kershaw is on the field, it’s his commitment to helping others that is most admirable,” said Bill Hickman, Spahn Award Gala chairman. “His work through the foundation is an example for each of us.”

The Spahn Award is unique in that it’s the only major league sports award based purely on a statistical formula. Each year’s winner has the best cumulative ranking in three categories: wins, strikeouts and ERA. Hickman said the award is the only award presented in Oklahoma to a major league athlete for their performance on the field.

Warren Spahn was a Hall of Famer and native Oklahoman who is the winningest southpaw pitcher in MLB history, with 363 wins.

During the gala, the Ferguson Jenkins and Michelle Smith Outstanding Student Athlete Awards will also be presented to outstanding high school baseball and softball players. Jenkins, a Hall of Fame pitcher, has been connected to the awards since 1999, and Smith, a two-time Olympic gold medal-winning United States softball pitcher, is lending her name to the award for the first time this year.

The gala serves as a fundraiser for the Bricktown Rotary Club and the Jim Thorpe Association, both nonprofit organizations. For more information, call 605-2375 or visit okcspahnawards.com.