Legacy of Conservatory lives on despite new name 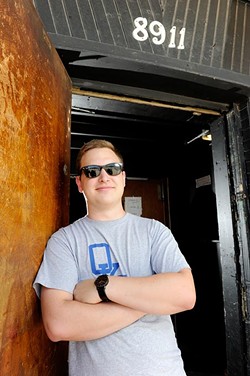 The Conservatory was home to indie bands and their young fans for more than a decade, and new owner Nick Hampson hopes to continue that legacy in a club he has frequented and worked in since he was 15 years old. One of his first responsibilities as new owner was to find a new name for his self-described home away from home.

Now called 89th Street Collective, the venue was The Green Door before it was The Conservatory. Previous owners Dustin Wallace and Gianni Santille took over the venue in 2003 when The Green Door relocated to east Bricktown.

In February, they sold the venue to Hampson, who has worked in the club for nearly four years.

“I started doing live sound when I was about 16, and that got me into music,” Hampson said. “I worked at the Coca-Cola Event Center and Bricktown Live, and that’s where I met people who booked bands.”

Hampson started booking small acts as a result of his new connections, and a career in music seemed inevitable from that point. In addition to working at The Conservatory, he was also a fan of several bands that played there. It was a case of work and play in the same place, so when the previous owners decided to retire, he wanted to keep the venue active.

“There are very few all-ages venues anymore,” Hampson said. “I was coming to shows here when I would not have been allowed into many other venues.”

His appreciation for the kind of place that allows all ages and features underground bands made it an easy decision to buy the club, too.

“I chose the name because it’s about a group of people that share or are motivated by a common interest or objective,” Hampson said. “Our scene, the punk rock scene, is always motivated by common interests, and we thought it would help people feel like the place was home just like it did when I started going to shows here when I was 15.”

Hampson does love the punk rock scene, but he said 89th Street Collective will do what the venue has always done: book indie bands in many different genres, including hardcore, metal and indie pop. He is handling the booking himself, and shows are already happening, sometimes a couple times a week and sometimes more frequently.

As part of the new identity, Hampson has refurbished the bathrooms, purchased new signage and updated the PA system. He said there will be more changes, including relocating the bar to allow more space and possibly knocking out a couple walls to increase capacity. By repurposing some storage space as well, he hopes to increase the capacity to nearly 300.

A change in ownership also means a change in licensing for the bar. Hampson has applied for the new license, and he said the venue will once again have a full bar.

“We’re hoping for 30-60 days, but we don’t know,” Hampson said. “We will use the wristband system like we always have so that we can continue to be an all-ages venue.”

Print headline: New age, The Conservatory is now 89th Street Collective, but it still offers live music for all ages.