Growers are starting to harvest their first batch of medical marijuana in the state.

It’s the beginning of Dan Wade’s first harvest, and you couldn’t chisel the smile off of his face. Well, his first legal harvest anyway.

On a Saturday night in the back corner of a northwest Oklahoma City office park, the folks at Green Seed Farm were chopping the second plant from their first growing cycle, a strain called L.A. Confidential.

“They usually finish between seven and eight weeks. One’s not ready, but the other one is prime,” Wade said. “Since it’s a perpetual harvest, every month, we harvest a new cycle. This month, we’ll likely see between five and 10 pounds. Most likely, it’s going to be right in the center of that. Of course, it’s always hard to determine yield until it’s properly dried and cured. Typically, a bud will lose about 60 percent of that humidity, 60 percent of that weight. So you can weigh it wet, do a little bit of math and get a decent number that you kind of run with.”

In addition to the L.A. Confidential, Green Seed Farm will be growing some old favorites like Blue Dream and GSC (formerly Girl Scout Cookies).

Most of the crop will end up at Steve’s Greens Cannabis + Wellness, 6715 N. May Ave. The first dried and cured flower is expected to hit shelves at the end of January.

“We didn’t expect it to become legal. When it became legal, Dustin contacted me and said, ‘Hey, let’s do this,’” Wade said.

“I wanted to do this. Me and my wife also have Steve’s Greens CBD + Wellness. We went to Denver a few months ago with Dan and a couple other people, checking out things and talking to dispensaries, and they’re like, ‘The only way you’re going to make it is if you have your own farm,’” owner Dustin Mathis said.

The “farm” currently consists of two large grow tents housing approximately 70-80 plants comprised of about a dozen strains. The idea is to start small and expand later.

“If you bootstrap it, be frugal about how you spend and watch every dollar going in and out, then you can do it on a budget,” Wade said. “You can actually grow commercially with just a few dollars.”

“If you’re in a gigantic space, there’s just no way you can keep up with it unless you have hundreds of people on staff,” Mathis said. “This way, we know the plants are getting what they need. We know what needs to be done, and it’s manageable. And we’re growing strains that one, we know are good for patients and two, have really good flavor.”

“That’s one of the difficult things about finding investors and things like that,” Wade said. “They want to know ROI; they want to know exactly what it’s going to yield. And when you’re talking about plants, especially organic like this, it’s wild. You don’t really know what the yields are going to be exactly. Now if you dial it in and use the same genetics over and over and over again, we’ll know exactly what we’re going to yield, but we like to switch things up a bit, you know? Just keep it new, keep it fresh.”

Wade now holds a grower’s license for a plant that once put him in the criminal justice system for half a decade.

In the summer of 2009, Wade and two others were arrested by Bethany police for growing pot. He pleaded guilty in Oklahoma County District Court and was sentenced to five years probation. Two years of growing ended with a couple weeks in jail and changed the course of his life.

“I just stayed straight and narrow for the longest time,” Wade said. “It was completely life-changing, to say the least. Completely got out of it for a while. Didn’t care about it for five years or so after that. It’s hard to care about something after you’ve been locked up for it. It’s one of those things. It’s always there, that information is always there. Back then, I read so many books about it.”

“We’re both avid smokers. We want good product; we want to smoke good product, clean product. We’re going complete organic — hand-watering, no pesticides. We’re doing it old-school, but I think that’s the best way to do it. ... We know where it’s started and where it’s coming from,” Mathis said.

“It’s definitely something I would be happy to smoke,” Wade said. “Knowing what’s in your weed is half the battle. And when you’re going to be consuming it, especially the way we consume it — by smoking it or turning it into a concentrate — you want to know that they didn’t use synthetic nutrients, they didn’t use pesticides and fungicides and just grow the plants godless, as I’d call it.” 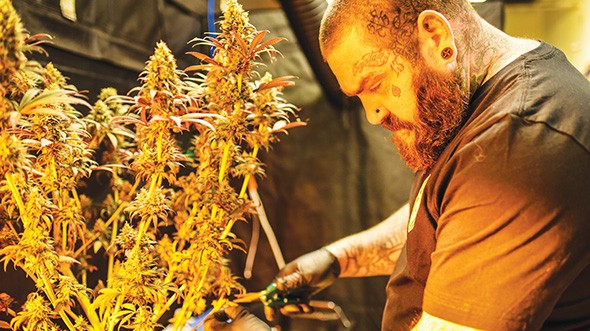 “We don’t want to add to the cancer,” Wade interjected.

“We’re feeding them with bone meal and kale and glucose and sucrose and, you know, all the staples. You can literally bathe in this stuff,” Wade said. “It’s not going to harm you. You could brew it up and drink a cup of it and you’ll be fine. You might take a couple of trips to the bathroom, but you’re not going to have to call the CDC.”

Now their hard work is ready to be harvested.

Wade begins by cutting off the “fan leaves,” or what most people know as pot leaves. They serve as solar panels for the plant.

Once Wade chops off the larger leaves, he cuts a branch and hands it to Mathis, who begins to trim it. Trimming involves cutting off the smaller leaves on the flower and tidying up the bud.

Afterwards, it will be hung up to dry and then cured. At the end of that process, which usually takes about three weeks, the flower will be ready to be smoked.

The drying process lasts about 10 days, and then it goes into a sealed container to cure.

“Of course it’s a plant, so I can say a time frame I want it in, but it’s kind of like when it decides it’s ready, it’s ready. ... If you don’t do it right, then you can still have a harsh flavor to it, which isn’t fun,” Wade said. “Every stage in growing is important. The seedling stage is just as important as the curing stage. If you keep everything focused, it’s not really hard to keep everything in line. But it’s definitely hard work; that’s for sure.”