Willie Nelson’s music is distinctive, to say the least. Shotgun Willie’s voice and Trigger, Willie’s guitar, cannot be imitated. An integral part of The Family, as Willie’s band is known, is the sound of Mickey Raphael’s harmonica.

He has been a member of Willie’s touring band and recordings since the early 1970s, and “Midnight Rider,” “Georgia on My Mind,” “Blue Skies” and “City of New Orleans” are only a few that have his stamp on them.

Raphael has also recorded and become family to multiple country and rock hit-makers over the years: Oklahoma’s own Leon Russell, Emmylou Harris and multiple generations of country royalty, including Johnny and Rosanne Cash, Waylon and Shooter Jennings and Willie’s sons Lukas and Micah.

He also has made many guest appearances over the decades, including Motley Crüe’s “Smokin’ in the Boys Room,” Don Johnson’s Heartbeat album and even Snoop Dogg’s “Superman.” In fact, Raphael said he’s a “big fan” of hip-hop’s primary weed advocate, but he pointed out a big difference between two of the music industry’s major marijuana standard-bearers.

“Willie can smoke you under the table,” Raphael said. “I saw that in Amsterdam. That’s marathon stuff. It would kill a normal human being.”

Raphael’s interest in the harmonica began as a teenager in the Dallas area around the late ’60s and early ’70s.

An early influence during this time was Donnie Brooks, who eventually played alongside Waylon Jennings. But an A&R rep or band manager didn’t discover Raphael. Country music connoisseur and University of Texas football coach Darrell Royal did.

“[Royal] called me up and left a message with my folks’ house in Dallas and said [the Longhorns] were in town for a ball game,” Royal said. “‘I want to meet you. Why don’t you come over and bring your harmonicas and meet some of my friends? We’ll just have a little jam session.’”

Barrier-breaking country legend Charley Pride happened to be at that little jam session, as was a Nashville songwriter named Willie Nelson, who had recently moved back to the Lone Star State in order to find himself as an artist. In 1973, at age 21, Raphael made enough of an impression on Willie that he was asked to play a few Texas gigs and the Max’s Kansas City venue in New York City.

“It was pretty rough,” Raphael said about the early days. “We didn’t have a bus. We traveled with our own cars sometimes. [Nelson] was just touring around Texas. It wasn’t like we really had far to go. It was pretty exciting. We were playing a lot of club dates.”

Willie made a name for himself in Texas, but the “outlaw country” sound wasn’t yet a worldwide phenomenon. One particular studio session changed that forever.

“[Nelson] just shows up at the studio and said ‘I’ve got an idea for a record,’” Raphael told Oklahoma Gazette. “We’re hearing the songs for the first time as we’re recording them. It was very simple, very basic — we were sitting there listening to it while the tape was rolling. There were no extravagant arrangements or anything.”

The record, Red Headed Stranger, was Raphael’s first recording with Nelson. The label executives didn’t understand it, Raphael said, but Nelson knew what he wanted.

“It was so simple; [executives] were wanting something a little more extravagant,” Raphael said. “‘This is such a nice demo; why don’t you put strings on it?’ kind of stuff like that. Willie said, ‘No. This is what you get. This is the record.’”

Since then, Raphael has been in demand as a session player and producer. Raphael said recording time is rather short compared to being on the road. Last year’s session time included work with Chris Stapleton. In 1987, Raphael released a solo album, Hand to Mouth, which was re-released in 2000.

“A studio session takes a few hours and no more than a day for the record I play on,” he said. “My parts are done in a couple of sessions — six hours, something like that. The bulk of my work is on the road with Willie.”

Raphael added he doesn’t know how many times a year he’s asked to record; he just shows up and plays his best.

“I try not to leave the studio until I’m happy with [it],” Raphael said. “I make sure that everything is cool.”

When Nelson, Raphael and the rest of The Family roll across the Oklahoma/Texas border to perform a sold-out show 9 p.m. Friday at WinStar World Casino and Resort, Raphael said there will not be a set list. There never is.

“You never know what’s going to happen,” Raphael said. “You can be guaranteed a good show. Every show is unique; we’re just following him. It’s not planned out in advance.” 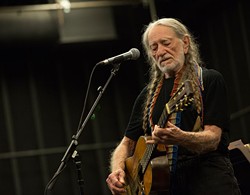