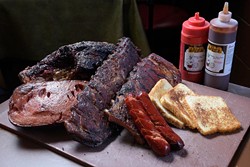 There’s no hiding a visit to Leo’s BBQ: You will smell like hickory smoke after eating lunch at the restaurant located at 3631 N. Kelly Ave.

That is a compliment.

Leo Smith opened the eatery in 1974 and quickly built a reputation for cooking some of the city’s best barbecue. His son Charles took over in 1994 after Leo’s death and keeps his father’s legacy alive.

Though the business expanded and contracted in the intervening years, there’s almost always a crowd. During a recent lunchtime visit, the hostess seated me and a friend with another dining duo to get us all fed more quickly.

The menu is pretty simple, though its presentation on a grid might confuse a few first-timers. Leo’s serves ribs, brisket, bologna and hot links in sandwiches, differently sized dinners and food by the pound.

Beef brisket is the basis on which most Oklahoma barbecue is judged. For me, the ideal brisket is tender with a bit of chew — nobody wants a mouthful of meat mush. The smoking process should break down the fat and collagen in an otherwise-tough cut of beef without drying it out. Barbecue sauce is nice, but if the meat’s flavor and texture can’t stand on its own, it needs more work.

Leo’s brisket is perfect. A seasoned rub forms a peppery crust that structures each slice and brings out the beef’s savory aspects. The hickory smoke suffuses the meat so each bite bursts with authentic pit flavor.

A sandwich ($9.49 with small baked potato) is a great medium for brisket, but if it’s your first time at Leo’s, consider ordering a light dinner ($9.99) portion, which includes a quarter pound of meat and sides of macaroni salad and baked beans. This brisket deserves to be tasted on its own before it’s weighed down with sauce and bread. 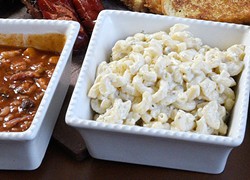 Step away from the cold cut aisle and discover the true potential of this sausage when it’s smoked. The heat opens up bubbles within the meat, giving it a little added texture.

Barbecuing works with the unique properties of bologna, which traps the smoky flavor of the pit inside its homogenous,c fine-ground structure.

Bologna is obviously great as a sandwich ($7.45 with small baked potato), and I suggest you take a few bites before adding sauce. 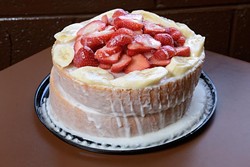 There’s a sneaky heat to Leo’s hot links (five in a pound for $14). Like other small sausages, hot links are best when barbecued. The heat chars and blisters the skin and renders the fat, which cooks the meat as it drips out.

They are a sensory delight. Crisp casings have both crunch and chew. The meat inside is moist and fatty with a slow-building burn that hits the tongue a few bites in.

Meat that “falls off the bone” is not always a good thing when it comes to barbecued ribs. It’s a sign they were overcooked by an inexperienced or insecure chef.

Leo’s ribs ($19.99 for 24 ounces) do not fall off the bone. They are waiting for you to take a bite strip the well-seasoned, expertly smoked bark off the top. There are still pockets of fat in these ribs, which you can avoid or devour, depending on your preference.

Toothsome is a good word here. The crust is blissfully chewy, sheltering melt-worthy meat that is courteous enough to hold onto the bone as you lift it to your mouth.

Leo’s has mastered good barbecue that’s cooked right and unpretentiously served to fans of the style. If you decide to use the sauce, do so sparingly. The vinegar pop of the hot sauce is a nice contrast to the succulent meat, but too much drowns out the skill of the pitmaster. Respect the meat.

With so many tasty meats, it can be daunting to choose just one, so don’t. Leo’s Special ($19.99) includes two ribs, two hot links, brisket, bologna, two sides and a small slice of Leo’s strawberry banana cake.

A slice on its own is $3.95, and it has the flavor of banana bread and the light, airy texture of cake. Frosting holds the fresh strawberries and bananas on top and adds a spike of sweetness. The cake, like a visit to one of Oklahoma City’s finest barbecue joints, is a must.

What works: The brisket is juicy and smoky, and the ribs have excellent texture.

What needs work: The venue is loud and busy.

Tip: Leo’s Special is big enough to share but so good you won’t want to.