An encaustic artist recreates the cancers attacking her family in an effort to process the struggle that took her father and threatens her mother. 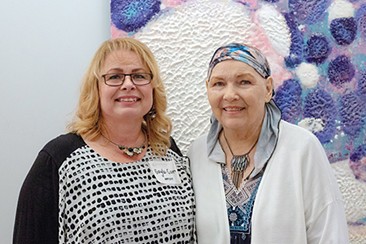 When one person has cancer, everyone has cancer. Gayle L. Curry has been battling cancer with her family for a decade since her father, Pat, was first diagnosed with kidney cancer. The longtime brick worker was lucky because the cancer had encased itself so he didn’t even need radiation treatment. Her mother, Phyllis, was diagnosed with leukemia in 2015. Then came Pat’s pancreatic cancer in 2016. Then Pat’s funeral. Then came the recommendation for hospice care for Phyllis. Then the search for a second opinion. Then came the blood transfusion. Then home care and Phyllis’ slow battle back to health.

Now, with a little time to breathe, Curry is finally returning to her art for an exhibition at Gaylord Pickens Museum titled Unknown Origins. It is an examination of the strange beauty of cancer cells, the deadly invaders that have threatened 24 members of her family and three close friends, the scourge that has taken over her life.

“When we were doing all the tests for my mom’s leukemia, I was trying to research how to help her and find options. I wanted to know what leukemia does,” Curry said, explaining that she got to look at her mother’s blood samples. “The leukemia cancer cells choke out red and white blood cells so it invades and takes over your blood system. The cancer cells had been dyed with pinks and purples and whites, making really beautiful shapes. Such a paradox that something so beautiful can be so terrible.”

In an effort to process the stream of successes and setbacks of the past decade, Curry decided to begin creating encaustic paintings inspired by her mother’s leukemia cells, but also other types of cancer images she had seen where the diseased cells had been dyed in various, vibrant colors to set them apart.

“I tried to represent them all,” Curry said. “Not only did my parents have it, but there are so many people in our family that have had cancer or are still fighting it. I did a lot of 6x6 [pieces] that were dedicated to them.”

She felt that during the past three years, she had been encased in a type of creative chrysalis as the rest of her life was consumed by cancer. Phyllis had once been a secretary at a school but had to quit because her immune system was too compromised for her to be in the same building as hundreds of walking, coughing petri dishes / children. Following the blood transfusion in July, Curry brought her mom home to recover. Curry moved her art studio from the Paseo School of Art back to her house and began creating again, returning to the encaustic process that uses heated wax as a medium.

“When I began creating these images, I didn’t even think about anyone ever seeing them,” Curry said. “Mom has been a very big part of the series. When I first started thinking about showing them, I asked her if it would bother her. And she goes ‘No! I’d be honored.’ She was at the opening and was tremendous. ‘I feel like a celebrity! Everyone thinks this show is about me,’ [she said]. And I said, ‘It kinda is; it’s about you and dad.’”

Marissa Raglin is the director of museum experience at Gaylord Pickens Museum and played a critical role in bringing Curry’s exhibit to the public. Raglin is part of The Intentionalists, a small artist’s group that formed following an Artist INC workshop and developed into a regular meet-up of the original five artists. The meetings focused on building their careers but also art as therapy. Raglin had been a close witness to Curry’s family struggle over the past three years and was eager to bring Unknown Origins to the museum.

“There are so many ways to tell a story,” Raglin said. “In working with melted beeswax in an abundance of colors, Gayle brings life to this terrible disease. I appreciate Gayle’s outlook and curiosity in approaching this intimidating subject. This unique exhibition is relevant to many people, as cancer has touched so many of us individually or through someone we may know.”

Curry’s return to art brings her back to the talent she had been fostering since she was 3 years old, trying to pry her parents’ attention away from her newborn brother. She’d use crayons on whatever surface she could find, which were often bedroom walls until her mother brought home paper. Her parents continued encouraging her art and, as there weren’t many art programs in Cromwell, where she grew up, they would find artists in the community to give her lessons.

As an adult, Curry drifted away from realism and toward abstract art, which she said her parents didn’t quite get, but they still encouraged her. While walking through The Paseo Arts District, Curry encountered Kay Orr’s studio and was entranced by Orr’s paintings. She began taking classes from Orr, and after Orr died, Curry teamed up with some of the other students to convert the space into an artist cooperative titled In Your Eye Studio & Gallery.

When she found encaustic art, she said she never looked back. She later opened Paseo School of Art at 3110 N. Walker Ave., where she gave workshops on encaustic art and taught private students.

“It’s funny that I started with crayons and now, so many years later, I work with encaustics so it’s like I came right back around to, essentially, another type of crayon,” she said. “When I ran into encaustics, it opened everything up. It’s a medium you can’t control, so you have to just see where it wants to take you. I try to take direction from encaustic rather than directing it, which leads to all these beautiful, happy accidents.”

Though Curry has scaled back her teaching, she is going to continue producing and is hoping to organize a group show with The Intentionalists in 2019. The reception of Unknown Origins really encouraged her to refocus on her artwork.

“I did consider that the subject matter could be difficult for some people,” Curry said. “‘Why did you create art out of something so ugly?’ But I haven’t found that to be true. Everyone has been so supportive. Unknown Origins is a show about cancer, but it’s also about hope and healing and trying to take back some control of an uncontrollable situation.”