None of the breathless predictions have come to pass; they haven’t even come close. The data they use is based on faulty models, fiction and abysmally poor collection techniques. 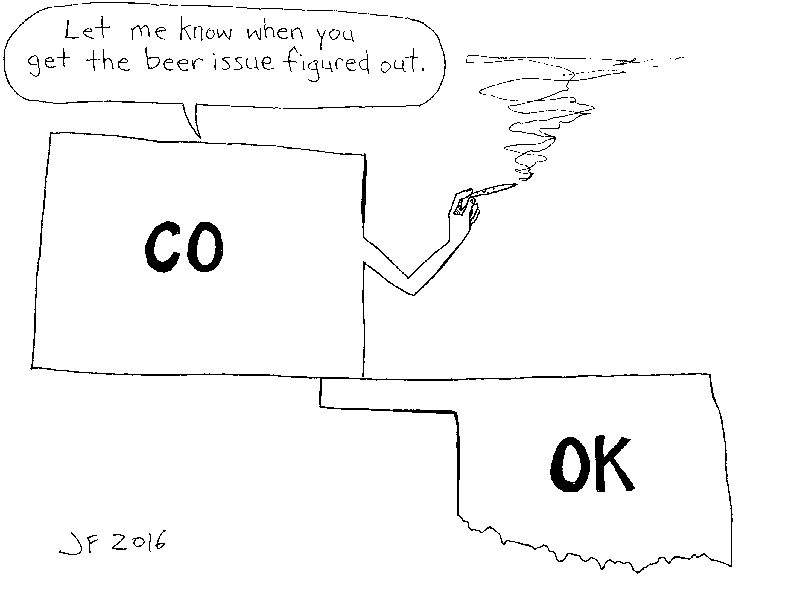 As Oklahoma City becomes more communist and shifting fines from tenants to landlords, viewing landlords as endless sources of funding, Oklahoma City is becoming less desirable to Americans and better for socialists.

A tenant parks an RV on the yard for a day and the city notices. Does it fine the tenant, the perpetrator? Of course not. It fines the landlord, who was not at fault in any way, shape or form. Upon getting the letter regarding the fine, I had already evicted the tenant for other reasons, but I still got robbed by OKC.

Is this a city for Americans or socialists? Inquiring minds want to know. Of course people who like living off of others see this as a good thing, like MAPS and taxpayer-funded sports programs to which I’m forced to pay for, etc., etc.

For decades, Oklahoma Workers’ Compensation has been synonymous with concepts like disingenuous, fraud, corruption, intellectual dishonesty and even contempt. From the outside looking in, Oklahoma’s old-school workers’ compensation system was viewed as having nothing to do with protecting injured workers and everything to do with enriching the lawyers and medical providers who exercised substantial influence over the process.

Oklahoma managed to create an entrenched, decades-long system run by those intent on handing out awards that defied common sense, without regard to law, thereby fostering a gold-rush mentality among workers, lawyers and medical providers.

In 2013 and with the specific intent of creating sweeping reform, the Oklahoma Legislature passed landmark legislation that repealed the Workers’ Compensation Act. It eliminated the one-sided court system and replaced it with an administrative system. The 2013 Oklahoma reform also addressed longstanding problems associated with coverage for pre-existing conditions.

In the old-school system, an Oklahoma worker’s non-occupational, pre-existing medical conditions would present no obstacle to obtaining a substantial compensation award.

Since passage of the 2013 reforms, Oklahoma Trial Lawyers have worked to challenge these new reforms as unconstitutional. The most recent challenge to the Oklahoma Option is currently awaiting a decision by the Oklahoma Supreme Court in the case styled Vasquez v. Dillard’s.

In that case, the trial lawyers and others have generated mountains of paperwork but have carefully avoided any discussion as to whether any on-the-job injury ever occurred.

For example, court records in Vasquez suggest that there was not a work-related accident. The worker experienced pain while carrying shoeboxes from a retail sales floor to back storage area. The claim was denied.

Upon receipt of Ms. Vasquez’ appeal, the Dillard’s appeal committee obtained an independent examination from a board-certified family physician who conducted a review of Ms. Vasquez’ medical records.

An examination found that she had pre-existing and degenerative conditions to her cervical spine that were not aggravated by carrying the shoeboxes.

Based upon this report, the appeals committee determined that her medical conditions could not be covered by Dillard’s Option Plan.

There was no work accident because there was no significant aggravation of the pre-existing condition as required by the 2013 reforms.

The worker appealed and her case is now pending review. Unmistakably, the Oklahoma Option is working as intended by the legislature.

Two things were omitted in Ms. Dershem’s Letter to the Editor (Opinion, Letters to the Editor, “The Truth,” Carolyn Dershem, April 27, Oklahoma Gazette): not opening with “Once upon a time…” and not closing with “… lived happily ever after.” Just like all fairy tales.

You must realize that the anthropogenic climate change cabal is fraught with fraud, lies, hyperbole and extortion.

None of the breathless predictions have come to pass; they haven’t even come close. The data they use is based on faulty models, fiction and abysmally poor collection techniques.

You assert that Oklahoma needs “a relevant energy industry and an infrastructure that gets the energy to the people who are going to use it.” I would submit that this paradigm already exists in spades. Oil is an international, fungible commodity, and the only reason the United States, of which Oklahoma is one, remains dependent on Middle East oil is a feckless energy policy.

You realized, of course, that China is putting a coal-fired power plant online every week and European countries are returning to fossil fuels and we put hundreds of thousands of miners out of work.

But I’m a fair, open-minded person. You may have a magic wand to cause us not to be dependent on carbon-based energy. But I challenge you to show us troglodyte deniers how easy it is.

I’m sure you will have no problem maintaining the same standard of living that you now enjoy.