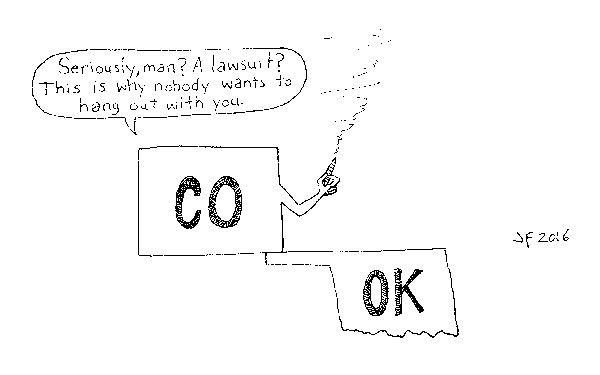 When considering median ordinances, there is a big difference between the mental capacity and, therefore, safety of Girl Scouts selling cookies and adults panhandling.

“The same safety concerns” addressed in the commentary “A median ordinance protects everyone” (Commentary, Georgie Rasco, Oct. 28, Oklahoma Gazette), where it compares protecting children to protecting the “disproportionately poor” is no more an issue of safety than the issue of voter identification laws were about preventing voter fraud and more about restricting the rights of certain populations to vote.

Both issues are smokescreens not justified by the causes they presumably are passed to prevent. Voter impersonations were rare. Accidents involving panhandlers are also rare.

We aren’t outlawing walking on or near city streets, which is more dangerous than standing near our city streets. Yet we approve ordinances that are costly to enforce and further burden our law enforcement and judicial systems.

Do we want our already-spread-too-thin men and women in blue spending their time giving out citations to the poor, or do we want them stopping violent crime in our city?

Be honest; if the purpose is to stop roadside financial solicitations, pass ordinances that prevent that.

What our city council might be outlawing with its a median ordinance is far more precious than what it appears: It is your constitutional right to public speech.

I am concerned that in the rush to remove panhandlers from our public roadways, we are preventing our citizenship from the right to freely assemble. I especially appreciate the right to show my support for political issues, candidates and what could be unpopular positions.

It is an issue of free speech that we should not be so quick to outlaw. One person with a sign can call attention to an injustice.

When that is taken away, it makes it easier for those already in power to silence opposition.

Many lives have been lost to secure our rights of free assembly and free speech.

We have people who move to Oklahoma because of the low cost of living and low taxes.

But when they get here, they realize that the low cost of living comes with expenses they don’t want to incur and puts us on lists that aren’t issues in other parts of the country.

Oklahoma ranks at the bottom of lists for good schools, teacher pay, physical and mental health, roads and bridges and at the top of some lists we don’t want to be on: poverty, domestic violence, prescription drug overdoses and hunger.

This seems to be the problem: Oklahoma’s governors, legislators and many of its citizens don’t understand the relationship between taxes and services.

They seem to believe that low taxes means more services.

Well, my whole life I have heard that you get what you pay for. We pay very little, and we get even less.

If we want to make Oklahoma great, let’s do this: Insist that our oil and gas producers become leaders in renewable energy innovation.

We have regulations that will force the oil and gas industry to change. Most people insist that regulations will ruin the industry, but in the long run, fracking, carbon dioxide and carbon monoxide poisoning and pollution and the marketplace will ensure that oil and gas are unsustainable energy sources.

So let’s push the oil and gas industry into the innovative forefront of renewable energy.

Renewable energy innovations will create jobs and will propel Oklahoma into manufacturing and installation.

This will put more and more people to work, insulate Oklahoma from the vagaries of the fossil-fuel economy and increase the tax base.

Secondly, our Oklahoma children have the ability to do better in school. Improved test scores show that with encouragement and the right instruction, our children improve. When we respect education and educators, Oklahoma schools will the best in the nation.

Let’s put money into our schools and pay our teachers more than Texas. This is important to get our best people into education and keep them in Oklahoma.

Of course, this must be a sustainable endeavor, not taking money from Peter to pay Paul, as some legislators have suggested.

Our teachers need a good pension, and we need the tobacco settlement money to make us healthy.

Let’s get a real task force together to look at the best practices for funding schools and see how we can do it.

Aren’t our children worth a penny?

Oklahomans have the right to change.

Let’s figure out what the real problems are and start thinking about smarter solutions.

It’s still early in the presidential primary season, but so far, I have been very impressed with Dr. Ben Carson, among others.

I would like to explain the distortion that has taken place in the media around Carson’s recent comments concerning Sharia law and the United States Constitution.

In particular, I would like to correct statements and complaints from the United Arab Emirates designated terrorist organization and the Council on America Islamic Relations (CAIR).

Carson was asked if he believes Sharia law is consistent with the Constitution. Carson said, “No, I do not.” During a September interview on NBC’s Meet the Press, he was asked if he would have any objection to a Muslim serving as president. Because a practicing Muslim might submit to Sharia law, he answered “I would not advocate that we put a Muslim in charge of this nation. I absolutely would not agree with that.”

In a later interview with Fox News, Carson elaborated: “We do not put people at the head of our country whose faith might interfere with them carrying out the duties of the Constitution” (as reported in “Carson: Muslims can be president if they ‘reject’ Islamic tenets,” Sept. 22, USA Today Politics).

“If you’re a Christian and you’re running for president and you want to make this [country] into a theocracy, I’m not going to support you,” Carson also said in the Fox interview (as reported in “Republican Ben Carson claims benefits from Muslim criticism,” Sept. 22, The Associated Press). “I’m not going to advocate you being the president.”

He also said, “If someone has a Muslim background and they’re willing to reject those tenets and to accept the way of life that we have and clearly will swear to place our Constitution above their religion, then, of course. They will be considered infidels and heretics, but at least I would then be quite willing to support them” (as reported by USA Today).

Our Constitution say that no one shall be denied the office of president because of his religion.

As you can see, Carson didn’t say that at all. He did say that Sharia law was inconsistent with the United States Constitution, and he is, indeed, correct.