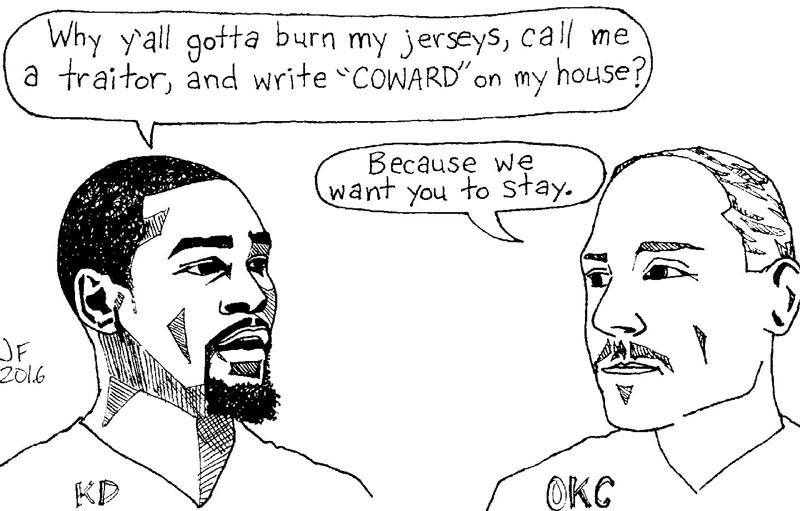 In his letter, “Redefining hate,” (Opinion, Letters, June 29, Oklahoma Gazette), Pete Lepo states that Donald Trump “has not said anything negative about Hispanics.”

In announcing his campaign for president last June, Mr. Trump said that Mexicans were rapists and that they were bringing drugs and crime into the U.S.

Sounds like negative comments to me, but apparently not to Mr. Lepo.

In a recent edition of the Gazette (Opinion, Letters, “Redefining hate,” June 29), Pete Lepo calls me a bigot for taking Donald Trump to task over his stance on Mexican immigrants. I wish Mr. Lepo would read the speech I referenced in my letter. It was Trump’s first campaign speech, and it set the tone for later assertions by Trump regarding people of Mexican descent and other minorities.

If Lepo were to study that speech, he might notice that Trump never distinguishes between undocumented Mexican immigrants and the rest of us. Indeed, the word “illegal” only appears once, and then only in relation to Obama’s executive order. I challenge Lepo to find any wording whatsoever in that speech or any subsequent Trump speech in which Trump draws a bright line between documented and undocumented Mexican immigrants.

Lepo may be one of the few people in the world who doesn’t know that Trump has a real problem with Mexicans of all stripes. As evidenced by Trump’s repeated attacks on Mexican-American Judge Gonzalo Curiel, even Donald Trump seems to recognize that his beef with us is by no means limited to “illegals.” Clearly, President Trump won’t be appointing any Mexican-Americans to anything unless it’s gardener or dishwasher.

Poor Mr. Lepo. He is, as we say in Spanish, trying to blot out the sun with a finger. Like other Trump apologists, he must attempt to deny Trump’s xenophobia despite a critical mass of evidence, most of which has been pouring out of Trump’s mouth, that is now so obvious that even Trump’s fellow Republicans have been obliged to denounce it.

I know it is early, but Christmas is only five months away! The Oklahoma Turnpike Authority (OTA) has been shopping early in effort to get just the right gift for its private investors. You see, OTA is very thoughtful and wants to get those private investors something very special this year. So, after several months of shopping around, OTA has come up with the perfect Christmas gift for them this year: a nice, 21-mile-long turnpike through Eastern Oklahoma County!

The OTA didn’t have any loose cash on hand to pay for the gift, so they are working hard to borrow it through selling bonds. They only need $330,000,000 to make sure that this Christmas is very memorable to its private investors.

I’ll admit, OTA had to put a little more thought into the gift, because it is more than just the money; they have to take homes, property and remove all those pesky people who are in the way in order to pull it off. You can’t very well give a turnpike as a Christmas gift without all the trimmings, right? OTA is afraid they might have no gift to bring, so they are working especially hard for this one. They are having to work so hard that, in fact, they had to use inflated traffic estimates as part of the deal to try to get rid of the Eastern Oklahoma County people and their homes, but for private investors, OTA is willing to do almost anything; nothing but the best for people we don’t even know, right?

Meanwhile, back in the land of misfit toys, the citizens of Eastern Oklahoma County will have no home as they once knew it to celebrate Christmas in. The memories of family and loved ones coming to visit at the old home place will be all they have to cherish. Who knows where these families would have to spend Christmas if OTA is allowed to actually give such a gift? The gift OTA proposes would be composed of former homes, property and dreams of the former people of Eastern Oklahoma County.

Maybe, just maybe, the Grinch will show up and stop Christmas from coming for the OTA and its private investors but instead will ensure the rightful home and property owners; the citizens of Eastern Oklahoma County will have a very Merry Christmas in their current homes and on their current property.

PS: Santa, be sure to leave lumps of coal for the OTA; they have been very bad!