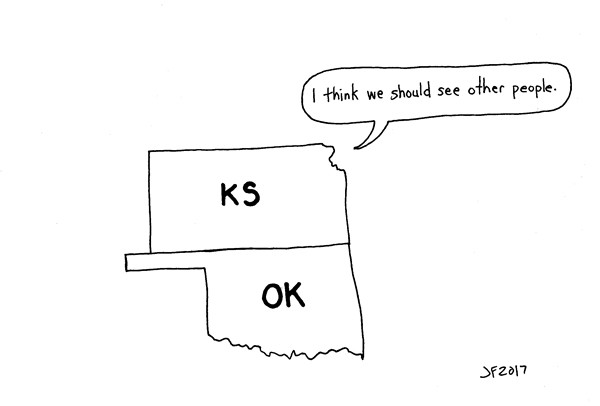 Senate Bill 860 has been sent to the governor, outlining next year’s budget, or budget cuts depending. Will next year finally be the year our state breaks the cycle?

The answer is no. Our legislators that we vote in every election are going to keep making the same repetitive mistakes year after year. Next year’s proposal doesn’t look awful on paper, but history shows that it will be. The only reason Oklahoma legislators formulate a budget plan right now is to decide where budget cuts will be made and where to give relief from previous budget cuts. Our state needs money!

Yes, our legislators hear what we are saying, and no, they cannot do anything about it. The money must come from somewhere, and our state is not producing. The same people we keep voting in every election are the same ones who opt for a short-term fix instead or a long-term solution. Perhaps the next election will finally be the year our voters break the cycle.

Nathaniel B. (letter May 31 issue), the day of equal rights in America is over. You are fooling yourself if you think LGBT people will ever get the kind of “equal” you want, unless you can beat the Islamic terrorists from taking over the American justice system. No, I’m not talking about the bombing, torturing, raping and murdering terrorists. I’m talking about the alien influx of rapidly reproducing Islamic citizens, legal and illegal, who are influencing and participating effectively in our local governments and schools.

Do you think that their Sharia law will treat you more kindly than Judeo-Christian laws and judges? And where will LGBT rights be then? Dream on and find joy, mercy and forgiveness in Jesus. I have many Muslim friends, associates, customers that are good, everyday people, but when they also come under the rule of Sharia influence, their American dream will also fade away. The American dream is dying, but hope for heaven is still available through faith in the Lord Jesus, who died for all diverse types of sinners. Like the Hebrews in the wilderness, you will wish for the days of “Egyptian” luxuries.

Conservatives’ willful denial of the consensus of world scientists on global warming and climate change is irresponsible, criminal and crazy. Atmospheric warming threatens all of nature, including humanity’s future. Conservatives say, “No problem!”

Melting polar ice, more extreme weather events and rising seas are just the beginning of its ultimate impact on all of us. We are living in the Sixth Great Extinction, this one caused by humanity’s disregard for the complex balance of nature. Thousands of species are going extinct as humanity blindly despoils Earth. Millions of Americans were too disgusted with politics even to vote in 2016 … so we got a president and Congress committed to accelerating fossil fuel development, weakening environmental protections, cancelling the Clean Power Plan and threatening to withdraw from the Paris Climate Agreement.

The solutions needed are far simpler than landing on the moon, which humanity did 50 years ago. Only politics, greed and willful ignorance threaten life on Earth.

Every elected official must be replaced in 2018 who is not committed to reversing global warming and climate change.