You can get a lot of kennels in a small area, but don’t build too many because the need may shrink quickly once employed. 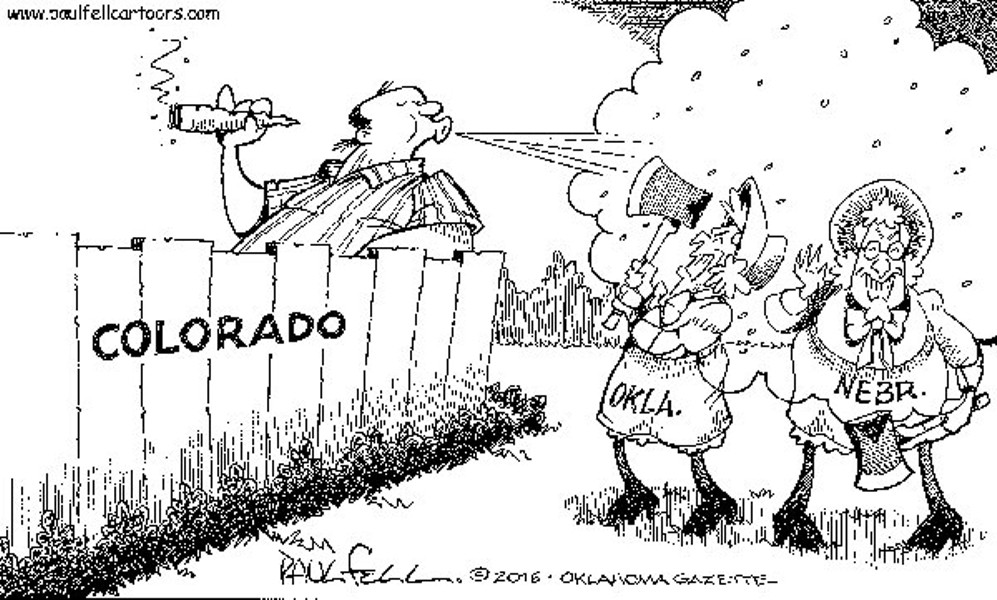 Gov. Mary Fallin and the Republican Legislature blame the bleak state of the state and our billion-dollar deficit on the “collapsed oil and gas industry” and associated “loss of jobs and revenue.”

But wait a minute. The unemployment rate is lower today that it was during the gas/oil “boon” days of 2010-2014, all while fossil fuel production in the state is taxed at 1/7th the rate as in Texas.

Could there be another cause of our bleak economic outlook? Like the billion dollars lost in state revenue over the past five years due to Fallin giving all those tax cuts to the wealthy and corporations? And where is all the economic prosperity promised to us by Fallin from her “trickle down” tax cuts that don’t even trickle anymore?

Or what about denying billions of Fed dollars for Medicaid expansion while other states have used this to boost their economies? Or how about Fallin’s cuts in government spending (including her 30-percent reduction in education funding) when worldwide examination indicates that government spending is a major driver of economic prosperity?

And with respect to jobs, Fallin and the Republican Legislature has killed thousands of high-paying jobs in sustainable energy by legislatively blocking wind and solar and biofuel industries in the state.

And now that same group is blaming our bad economy on loss of jobs. You can’t have it both ways; kill jobs on one hand and turn around and blame job loss for our problems. Republican oil monopolist John D. Rockefeller had a famous or rather infamous quote: “Competition is a sin.”

The “chickens have come home to roost” for the Republican Party for having tolerated and even encouraged fascist and racist rhetoric for at least the last 15 years. Now they have created a monster literally beyond their control. They really, really, really can’t stop him. Unfortunately for the rest of us, we are about to witness the most violent election campaign in our history.

Not many citizens I know are willing to “reclassify certain low level offenses, such as drug and simple property crimes.” I wonder if Mr. Steele has experienced a “simple property crime” or had a loved one killed by a speeding “low level” alcohol or drug abuser.

Among the alternatives to incarceration is one good suggestion in the article: lesser sentences. May I suggest lesser sentences with a twist? Put those lower level offenders in a 3-foot by 8-foot by 8-foot chain-link cage in a heated and cooled, concrete floored metal building with eastern European toilets (straddle holes in the floor of each cage) and minimal food and water.

They stay locked up 24/7 for a week for first offense, two weeks for second offense, etc. Five things will happen. First, offenders will think twice about repeating their crimes. Second, Oklahoma will maintain a positive deterrent and reputation for the definition of “tough” on crime. Third, shorter incarcerations will help low-level criminals get back to work more quickly. Fourth, incarceration costs will shrink compared to the home-away-from-home jails and prisons we have now. Finally, prisoner interaction and shared criminal training will be discouraged.

You can get a lot of kennels in a small area, but don’t build too many because the need may shrink quickly once employed. A pilot project would make too much sense. Then cut back on traditional prison amenities.

I am not sure what all the racial statistics often quoted about suspensions and incarcerations mean (News, “Inclusionary education,” Brett Dickerson, Feb. 24, Gazette). Whites compose 69 percent, blacks 7 percent and Latinos 9 percent of Oklahoma’s overall population.

Does that mean every time a black student is disciplined 10 whites must be suspended also and when a Latino is suspended seven whites must go? That would keep it even, and everyone would be happy with the percentages. I cannot believe administrators look at a disruptive student and say, “He is black, so we will suspend him. She is white; we’ll let it go.”

The same goes for incarceration. If the right values are taught at home, that is transferred to behavior.

The percentages of who is cooperating and who is not is not the job or the schools or the courts. They must simply respond to inappropriate behavior no matter whom it comes from.

I cannot think that their decisions are made according to color.

When I cut school, the football coach busted my butt with a board, and I didn’t cut anymore.

When the parents care not just that their child is in school, but that they are there for a purpose, things will change.

Don’t blame the school system; blame the culture of the home.

In the article, the services by Hope Community Services, Inc. are brought into focus concerning the budget cuts.

The Oklahoma Department of Mental Health and Substance Abuse Services (ODMHSAS), its 15 mental health centers and its patients are waiting for the final vote in May on budget cut amounts, wondering how the vote is going to impact them.

Hope provides psychiatric rehabilitation services, counseling, substance abuse services and several other wellness services for nonprofit. Hope gets some of its funding from the ODMHSAS, but with budget cuts approaching, how will Hope continue to provide these services to the community?

With more than 7,400 clients helped by Hope last year, how will Hope be able to reach the same number of clients served or more?

Without the appropriate funds to the mental health services, there may be more crimes in the streets of Oklahoma by the mentally ill who could not get the help they are needing.

State spending is being cut by 7 percent, leaving citizens without professional help they deserve.