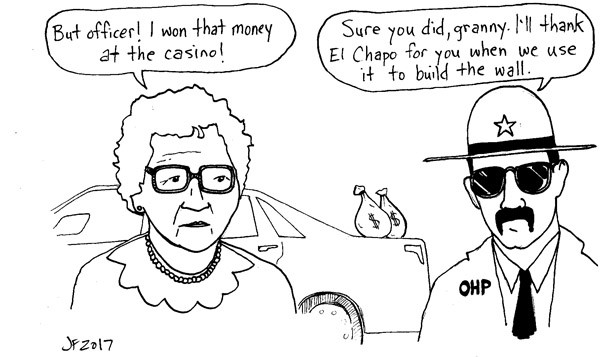 I don’t understand the widespread political support of providing safe places for criminals who are illegal immigrants and protecting them from prosecution.

It appears to me the police are derelict in their duties, violating their oaths of office and should not be allowed to maintain their paid positions. To me, it is comparable to an American soldier turning and shooting at Americans and it is OK; just put that soldier in a sanctuary place for “soldiers killing Americans.” I’m sure California will be willing to establish one.

I’m an American citizen; why can’t I be protected the same way with traffic tickets? Let me speed, run stop signs,  drive drunk, and then just let me go live in a sanctuary city for speeders and drunk drivers without prosecuting me. I don’t understand the difference. An individual commits a crime and is protected not only by the liberal politicians but also by those who take an oath to uphold the law. What difference does it make if they are an illegal immigrant or an American citizen? They both are breaking the law and getting protected from their crimes. Maybe we should be looking at how racist these sanctuary cities are. Are they discriminating against Americans and other races? How specific are these sanctuary rules?

Can an Asian, Native American, black, gay, lesbian, etc. be protected by the same rules? I’m beginning to think this sanctuary city thing could be a pretty good deal. I could do anything I want and the police will protect me.

The police efforts of protecting the lawless will have made a complete turnaround to their original purpose to the public, so who needs them at this point? Sanctuary cities represent a deterioration of respect for the law and, if allowed, our country will crumble and fall.

To all Republicans and Independents: I pledge allegiance to the U.S. of America! We all feel this allegiance profoundly. We do not pledge to a group, a party or a man. We all need to feel that our leaders govern for all of us, not for some.

Our leaders work for us. We need to be assured that they are honest, decent figures with moral backbone; that they do not lie or cheat. We need to feel that “America first” means  their allegiance is to the people and institutions of America first, not to money, or power or foreign governments or corporations.

I, my fellow countrymen, and you most of all, Republicans and Independents, need to be assured about the man in the White House. Many of us feel that the White House is a Machiavellian hotbed using clever lies and tricks in order to get or achieve power. Since you are now in control of the government, you need to take the moral high ground and demand an independent counsel to investigate now, immediately.

Then and only then, once and for all, can we know the truth. Please contact your senators and representatives to demand an independent counsel.