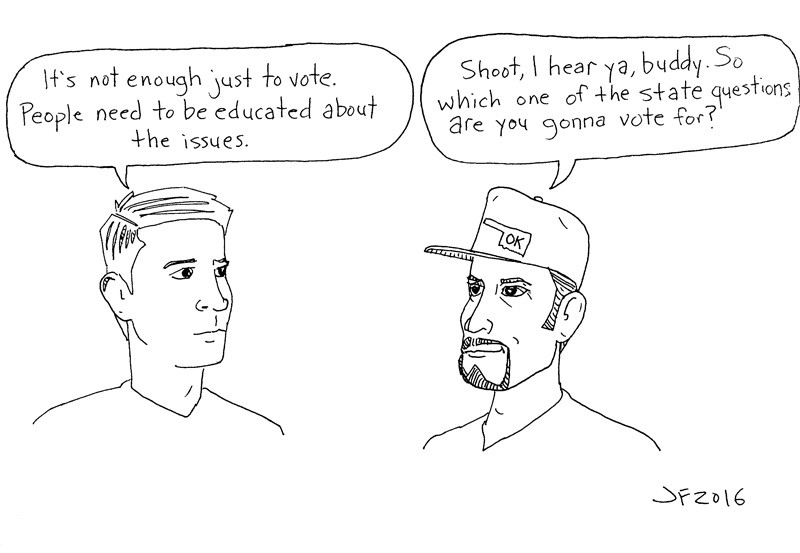 “The Donald” has a comfortable 30-point lead in Oklahoma. On many levels, this defies logic since most of Republican presidential candidate Donald Trump’s base in this state are workers who feel that the system has been rigged against them. The irony here is that the system is rigged against them by billionaire plutocrats and oligarchs like Trump. Big business tycoons and their Republican political shills stacked all the marbles in their favor and reduced workers in this country to living paycheck-to-paycheck, just like all the jobs they transferred overseas in their lust for bigger profits. Maybe for just one day (How about Election Day?), these workers can just think for a moment about exactly who is responsible for their plight.

With State Question 777 being relevant and Election Day looming, Oklahoma voters need to make up their minds about it, if they have not already. In my opinion, it is imperative that this proposal is not approved.

It will devastate family farms, diminish voting rights and prohibit Oklahoma from establishing reasonable food production standards. Moreover, SQ 777 will destroy our drinking water and block anyone trying to protect it. Most of all, the assault on animal welfare should be more than enough reason to say no.

If it passes, it would be nearly impossible to ever overturn and repeal once the consequences of this constitutional amendment begin to surface. Even Farm Bureau president Tom Buchanan admitted that it is flawed. Vote no on 777.

State Question 788: This being the question legalizing medical marijuana in Oklahoma. I wasn’t a front-row supporter or even a sideline spectator on this issue until it hit close to home. Seeing people in need of relief from chemo treatments, not to mention a host of other conditions, this could have made a real difference upon.

But after obtaining the required number of signatures needed to be placed on the Nov. 8 general election ballot, Attorney General Scott Pruitt decided to rename and restructure the wording of the question.

Because of this tactic, the question wasn’t submitted to Gov. Mary Fallin in time to be placed on the Nov. 8 ballot. This delay means a vote might not go before the people until 2018.

I would bet few knew the excess tax moneys from this question would have been split 75-25 percent between Oklahoma education and health departments. If you read the reworded question, it clearly was an attempt to scare state conservatives into thinking Oklahoma was legalizing marijuana for recreational use.

I urge everyone to remember these B.S. tactics when either the attorney general or governor decide on future political endeavors. Shame on you both. I am officially in the arena, off the sidelines and in the game.