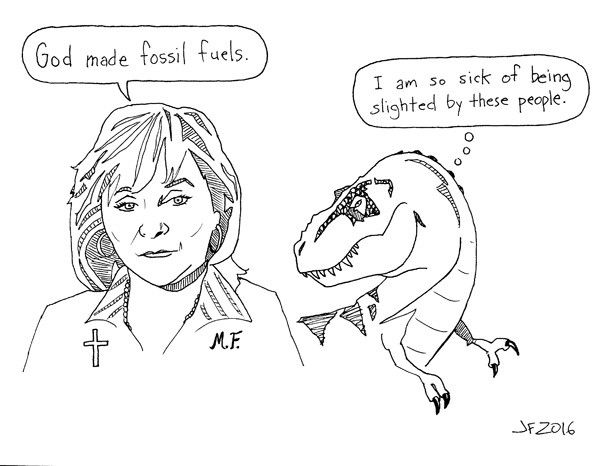 I saw a television commercial by Sen. Jim Inhofe asking you to vote for Donald Trump to lead our nation.

Sen. Inhofe wants you to support the party that put presidential nominee Donald Trump within reach of the presidency and who puts the Republican Party first, first before the ideals of democracy and respect for everyone, including women.

Sen. Inhofe wants you to vote for constitutional amendment SQ 777, which weakens your rights to protect life, health and the environment in Oklahoma.

It is obvious to me Sen. Inhofe puts his position and reputation on the side of partisan politics, retaining power and protecting big moneyed interests like putting foreign owned industrial farms off-limits to regulation.

It is time we voted people into office who will work together to solve our many challenges rather than obstruct and misdirect Congress and the people. Most important, we need to vote for representatives who care about people and the environment before party or profits.

“The Democrats, Independents and our weak Republican brothers and cousins need to repent of their political corruption and moral failures and save our country from being a weak culture that is fodder for the Russian, Chinese or Muslim leaders of the likes of Khan” (Opinion, Letters to the editor, “Trumping Kirk,” Michael Moberly, Oct. 5, Oklahoma Gazette).

If that’s true, then maybe he can send that memo to his moralistic locker room hero Donald Trump, who apparently views the current leader of Russia as a cuddly teddy bear who needs a hug.

When Joe Scarborough said, “He also is a person that kills journalists, political opponents and invades countries,” Trump responded, “Our country does plenty of killing also, Joe … He’s running his country and at least he’s a leader, unlike what we have in this country.”

“Yeah, sure there are allegations. I’ve read those allegations over the years,” Trump said, “but nobody’s proven that he’s killed anybody, as far as I’m concerned.” (Thirteen journalists have been killed in Putin’s Russia in the last decade alone.) Maybe President Trump (god forbid) could pardon O.J. Simpson and send him to Russia to help Putin find the real killers. (A mirror will do the trick.)

Russia is a corrupt, autocratic kleptocracy under Putin, where officials, oligarchs and organized crime are bound together to create a “virtual mafia state,” according to leaked secret diplomatic cables.

Trump has a very long way to go before he is going to “outsmart” Putin on anything, amply displayed in his incoherent position on Ukraine:

Trump said: “OK, well, he’s there in a certain way. But I’m not there. You have Obama there. And frankly, that whole part of the world is a mess under Obama with all the strength that you’re talking about and all of the power of NATO and all of this. In the meantime, he’s going away. He takes Crimea.”

What exactly does this mean? Putin’s there in a “certain way” (brazen invasion), and all the power of NATO (which he would “certainly look at” pulling the United States out of because it is “obsolete” and “is costing us a fortune”). Is he saying that President Trump and NATO would go to war with Russia over Ukraine? Is this how he is going to “outsmart” the Russians, confusing them?

He has apparently outsmarted his running mate Mike Pence, disowning Pence’s comment, “The United States of America should be prepared to use military force to strike military targets of the Assad regime to prevent them from this humanitarian crisis that is taking place in Aleppo.”

“He and I haven’t spoken, and I disagree,” Trump said.

Really? He hasn’t even talked to Pence about the most serious foreign policy question facing us, the ongoing civil war in Syria, and how to deal with it? We don’t know what the Don’s secret plan is to defeat ISIS, but you have to figure a Patton-like charge into Syria with U.S. ground forces, embroiling us in the civil war quagmire with no clear idea how long we stay and who takes our place when we leave, not to mention that the Russians have already bombed a “secret” base in Syria with U.S. forces. Russians killing US soldiers.

What could possibly go wrong with that?

As for the need to repent of the “moral failings,” yeah, right, Trump that paragon of virtuous behavior.

In 2010, then-Senate majority leader Harry Reid was opposed in his re-election bid by Sharron Angle in Nevada.

Republican Angle was an NRA favorite who posited that, should she lose the election, “There is always a Second Amendment solution.” Sound familiar? She lost, 55-45. Thankfully, no gunplay actually ensued re: Sen. Reid.

This election year has resurrected the idea of a “Second Amendment solution,” should a certain candidate lose. Fearful as that dark cloud might be, it has the potential of a “silver lining” if it also conveys to women the idea that concealed carry might be useful in deterring potential sexual predators.

Just imagine the possibility of a presidential candidate being wounded or killed in the act of sexual depredation? Wouldn’t that be a lasting game-changer!?