Nick Swardson gasses up his Too Many Smells Tour for a pit stop at The Criterion. 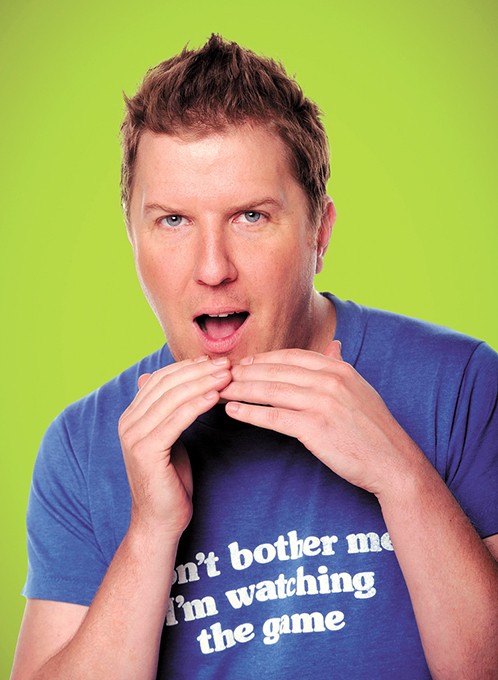 Nick Swardson’s new stand-up special is about bowel movements, which is not a euphemism for an acrid modern news cycle or the politically correct internet call-out culture that works so many other comedians into a tizzy. Nope; this is just good, old-fashioned potty humor — nothing on stage but a mic and a stool.

“It’s nothing political,” Swardson said in a recent Oklahoma Gazette interview. “I just talk about diarrhea and stuff. No one has to go, ‘Oh, I wonder if Nick is going to get controversial?’ I’m like, ‘Yeah, I will — with this toilet!’”

The Too Many Smells Tour, which is a new hour of material from the comic best known for his recurring role on the television series Reno 911! and his close association with Adam Sandler and his Happy Madison Productions film company, makes a local stop 7:30 p.m. Sunday at The Criterion, 500 E. Sheridan Ave. Admission is $39.50.

Swardson, 41, is a Minneapolis native who got into stand-up comedy almost as soon as he graduated high school. His career took off when he appeared in the 2000 film Almost Famous and scored his first Comedy Central stand-up special in ’01. He was a screenwriter on ’03’s Malibu’s Most Wanted and began working with Sandler, who originally reached out to Swardson as a fan of his work, on the ’06 film Grandma’s Boy.

But Swardson remains well grounded in spite of career success. He might be a movie star, but he eats, sleeps and defecates the same way we all do. Or at least that’s his goal.

“I’ve crapped myself so many times,” he admits freely.

Swardson is allergic to dairy products — a fact about himself he did not fully realize until about eight or nine years ago. He stopped eating dairy then, but enough damage had already been done. Lactose regularly wreaked havoc on his digestive track. It was often hard to tell if something was going to be simple flatulence or something more substantial.

There was no worse example of this than a time Swardson felt a movement coming while driving on a high-traffic Los Angeles freeway.

“It was horrifying,” he said.

Swardson remembers desperately looking for a place to pull over, but cars were everywhere. Even when he was finally able to reach the side of the road, the cars zipping by at high speed didn’t make him feel any safer or more comfortable.

It turned out that repositioning his body to get out of the car was enough to open up the floodgates.

“There was just diarrhea all over the fucking side of the highway,” he said.

Amazingly, considering the event occurred on a busy Los Angeles interstate, there is no cell-phone footage of Swardson’s very public incident. Such video would have been enough to ruin most other celebrities, but Swardson’s branding and the comedic tastes of his fan base probably would have turned such a clip into a cult classic.

“It probably would have made me a hero,” he said. “I would have become like an Avenger.”

Swardson’s most recent work was on Comedy Central’s digital-only series Typical Rick. The series stars Swardson, an actor trying to make it in Hollywood who is constantly overshadowed by his handsome but toolish friend Rick, played by co-star Simon “Dirt Nasty” Rex. While the series was able to build a small but enthusiastic online following, Swardson was recently informed that the network would not be bringing the show back for a third season.

Typical Rick was actually a plan-B pitch Swardson made to the network after it turned down his original idea: a comedy series called Brossassin.

“It was about an assassin who lived in a frat house,” the comic said. “His dad was an assassin and he was raised as an assassin, but then he went to college and became a frat guy — so obviously me. So I just stay at the frat house and moonlight as an assassin. It would have been the best show ever made. It’s genius.”

As good as Swardson felt the idea was, Comedy Central passed on it. So the comic decided to give them his idea for Typical Rick, which he had developed one night in a bar with close friend and Grandma’s Boy director Nicholaus Goosen. The network was much more open to this concept.

After Typical Rick’s second season ended, Swardson and Rex made a push for the series to go to air. But Comedy Central was not interested in continuing it at all. Todd Phillips, a friend of Swardson who is also the director and producer behind films like Old School and The Hangover trilogy, even offered to executive produce the show when he heard it was ending. Still, Comedy Central turned them down.

Still, Comedy Central’s decision to not pursue another season of the show is not putting Swardson out of work. In fact, he has many new projects on his plate, including his new tour and comedy special set to hit a to-be-determined streaming platform; a role in the upcoming summer comedy The Buddy Games with co-stars Neal McDonough, Olivia Munn, Josh Duhamel and Dax Shepard; a new movie with Goosen; and a show in development with actor and writer Danny McBride.


"It’s nothing political. I just talk about diarrhea and stuff." — Nick Swardson tweet this

Swardson is handling his entire workload without the help of a personal assistant. He has gone without an assistant since firing his hometown friend who used to fill the role after his financial manager called and told Swardson about some checks he had forged.

The comic was on his tour bus in the middle of nowhere when he called his friend to confront him about the situation. It was not great to have money stolen from him, but Swardson did get a laugh out of his former assistant’s response.

Aside from his roles as a standup and comic actor, Swardson is a passionate fan of Minnesota sports teams. One of the most amazing moments in the state’s sports history came just a few months ago, when Minnesota Vikings wide receiver Stefon Diggs raced into the end zone to propel his team over the New Orleans Saints and into the conference championship game as time expired.

Videos of Vikings fans reacting wildly to the play went viral all over the internet. No one was recording Swardson’s reaction in the restaurant of the Denver hotel where he watched the game, but apparently it was quite a scene, too.

“I fell to my knees in the middle of the restaurant and just started sobbing uncontrollably,” he said. “People were like, ‘Oh my God! Are you OK? Do you need an ambulance?’ And I was like, ‘No, guys. This is my team. Did you guys not watch what just happened?’”

Swardson is someone who has undoubtedly found his comedic niche. He knows who his audience is and remains forever loyal to them.

“When you first start out doing comedy, you just have to throw everything out there,” he said. “Some stuff works but you don’t really have a voice yet. But I’ve been doing this 21 years, you know what I mean? I know what’s going to work.”