In the sport and art of baton twirling, there is nothing like the feeling that comes when the performance is over. When holding the final pose and taking in the applause, all the hard work and hours of practice become worth it.

Last week, when baton twirler Haylee Chiariello and dozens of smiling children held the last pose, she felt a different sort of pride. In the span of a day, Chiariello introduced twirling basics to child patients of Oklahoma City Indian Clinic (OKCIC), where four years earlier, Chiariello received a life-saving referral from an optometrist.

“I give all credit to my story and my healing to the Indian Clinic because without them, I wouldn’t have known there was a problem,” Chiariello said. “I wanted to find a way to give back to the clinic that has given me so much. It gave me my life.”

As a child, Chiariello never grew bored watching her military father rehearse rifle spins and drills for his honor guard unit. Chiariello gripped her own metal baton for the first time when she was 12 years old.

“As soon as I got a baton in my hand, I wouldn’t let go,” she said. “There was so much I wanted to learn. It is such an awesome sport because you’ll never achieve everything in twirling. You can always build on it.”

Often performing with marching bands, their routines are filled with dance, gymnastics and baton-twirling feats like spins, flashes and flips, sometimes while using three batons at once.

Four years ago, Chiariello visited OKCIC for a routine eye exam. She and her family are Cherokee. While there, the optometrist expressed alarm over swollen optic nerves. Following a referral to a specialist, Chiariello was diagnosed with hydrocephalus, a condition that results from the accumulation of fluid in the brain.

Two weeks after her initial eye exam, Chiariello was booked for surgery and an extended hospital stay.

“I went from being perfectly healthy to completely sick,” Chiariello said. “It was really weird to go through such a dramatic change in a short time. When I came home from the hospital, I had a lot of healing to do. ... I had to work really hard to regain those normal everyday skills like talking and walking.” 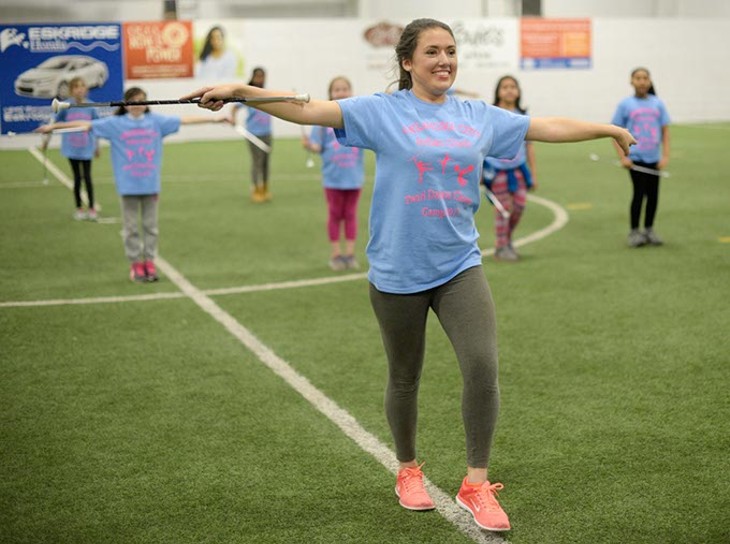 Part of her recovery was baton twirling.

“As soon as I could walk, I wanted to put a baton in my hand,” she said. “It worked my brain and it sped up the process of regaining basic skills.”

Now the high school senior is a well-known baton twirler across the metro. She has performed in dozens of local parades, at the Oklahoma State Fair and as a featured twirler at University of Central Oklahoma football and basketball games.

The clinic combined Chiariello’s two passions: twirling and working with Native youth. She plans to pursue Native American studies in college as well as twirl.

“I didn’t know if I would ever be able to do this again,” Chiariello said. “To share this with other people is really awesome. … I hope to do more clinics and camps and help this sport grow in Oklahoma and among Native youth.”

print headline: Sight to see, A life-changing medical diagnosis inspires a baton-twirling teen to share her passion with other Native American youth.