Life is grand on Planet Dorshak

Well-known local artist Dustin Oswald is Dorshak Bloch. But if you know any local artists, you probably knew that. In fact, you might know who Dustin Oswald/Dorshak Bloch is without even realizing, simply because of the prolific amount of localphilic t-shirts you've seen at Blue Seven and Local OK, 7518 N. May Ave., and DNA Galleries, 1709 NW 16th St., among others.

He owns local company Bombs Away Art Company, which he founded a little over 10 years ago, and publishes a graphic novel series, "The Story of Ivan A. Alexander" through local publisher Literati Press. 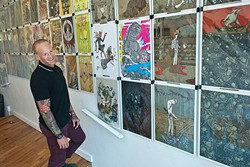 "I've always been drawn to the Paseo. I've always enjoyed being down here and showing at AKA Gallery. And this space became available," he said. "My last space was just a place to work. This place, I get to hang out in the art vein and just enjoy being in it."

"Everything that I do is under Bombs Away Art, and then the graphic novels are a side of that," he explained.

Although his work is and has been featured in group shows and other galleries throughout the city for a decade, this is a space he feels really good about.

He's been using the pseudonym since he titled a show Dorshak Bloch a few years ago.

"Bloch is an homage to Robert Bloch, the crime fiction writer," Oswald explained.

Bloch is a prolific American crime novelist who penned Psycho, the novel that was adapted into the film of the same name by Alfred Hitchcock.

Dorshak is a play on the first letter of Dustin's name and a reference to the Rorschach inkblot test, which is a psychological test developed by Hermann Rorschach.

"Plus, I just thought it sounded like a cool German name, " Oswald said.

Although the show's formal opening is Friday, you can visit anytime it's open (Wednesdays-Sundays noon-5 p.m.). Stop by and welcome him to the 'hood.

Note from the editor: Dustin Oswald is Oklahoma Gazette General Assignments Editor Kory B. Oswald's brother. However, that did not influence our decision to cover the artist, as we have covered Dustin in the past.